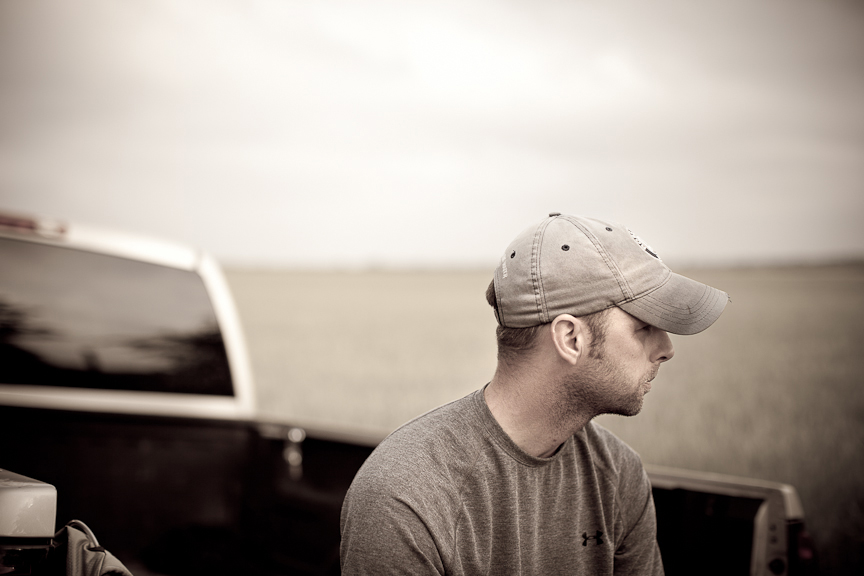 When I think of what the past two years has brought, I’m simply fascinated by the fashion in which paths and lives intersect.  The way dots connect, lines form and then branch off at different angles, each leading to new connections, collaborations, opportunities, and friendships.  Energies collect, combine and build.  All of it seems to just propel you forward. 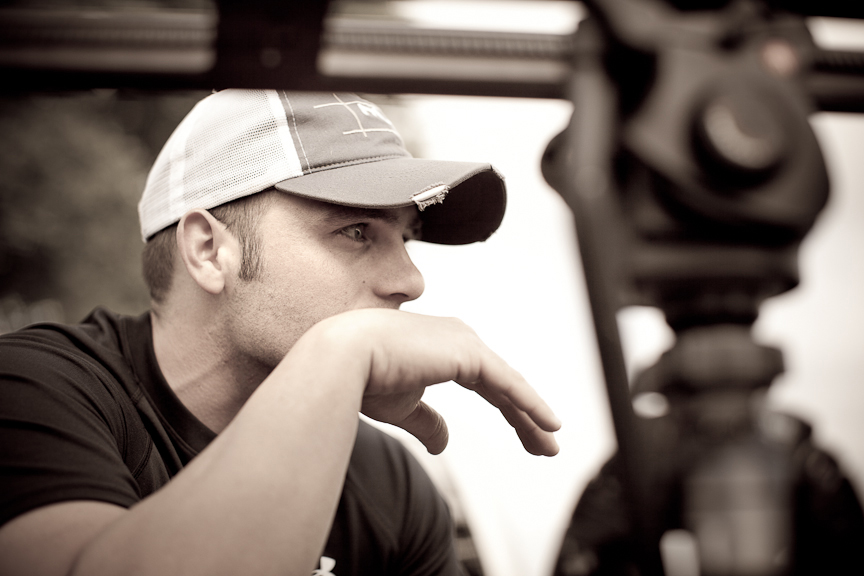 Matt White, visualizing the opening scenes for the promo video from the bed of his pickup.

When I first began publishing posts in this blog section of my web site, my intent was to tell stories about projects I had photographed, show new work, to use each piece as a vehicle for prospective clients to get to know a little more about me, and what it’s like to work with me.  This was a place for me to talk about my work and myself, and what I’d been up to lately.  I’ve enjoyed that part of the creative process, and that type of outlet.  It just seems like a fairly natural extension of what I do and who I am.  In some ways, this post isn’t much different from the others.  My gut, though, tells me that this one, or at least the reason for it, is maybe more significant.  Deeper.  More meaningful.  For a wealth of reasons. 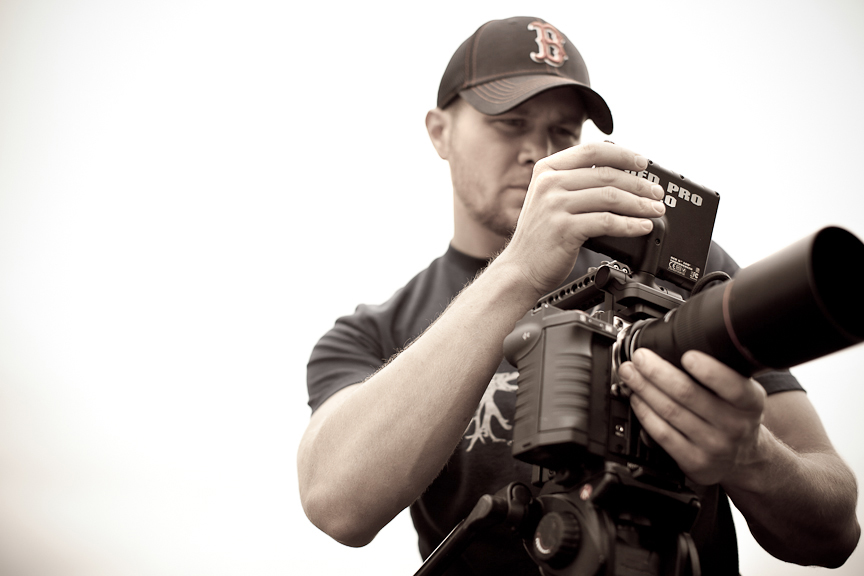 Dustin Lutt, doing his thing with the Red Epic.

I have sat at this computer to write this post on four separate occasions.  Each previous time, I wasn’t satisfied with the direction I’d headed in.  Now, I just need to get this thing out.  It’s probably not going to be the profound outpouring I had hoped for, but I’m going to be away from the “internet umbilical cord” for a few days and need to gather up a few of these scattered thoughts and jot them down.

The still images you see embedded in this post are from the production of the promo video we had created this past April, in central Kansas, to gain sponsors and supporters for the project, and to help describe our intent for the greater project, and the flavor in which it would be produced.  Captured afield using a RED Epic and Canon 5D Mark 3 in the hands of cinematographers Matt White and Dustin Lutt, the promo video came together in just two days time.

In a handful of days, I’ll find myself standing on some stunning ground in Idaho, and in the company of some very, very wonderful people – Rebecca Garlock, Ross Slayton, Colby Hackbarth, Dustin Lutt, Matt White, Matt Smythe, Robert Nelson, Aileen Nishimura, and a sprinkling of others. We are converging on a handful of Idaho’s great trout waters to begin and complete the filming of A Deliberate Life, our short-film project. (Click in the film title to view the promo video.) 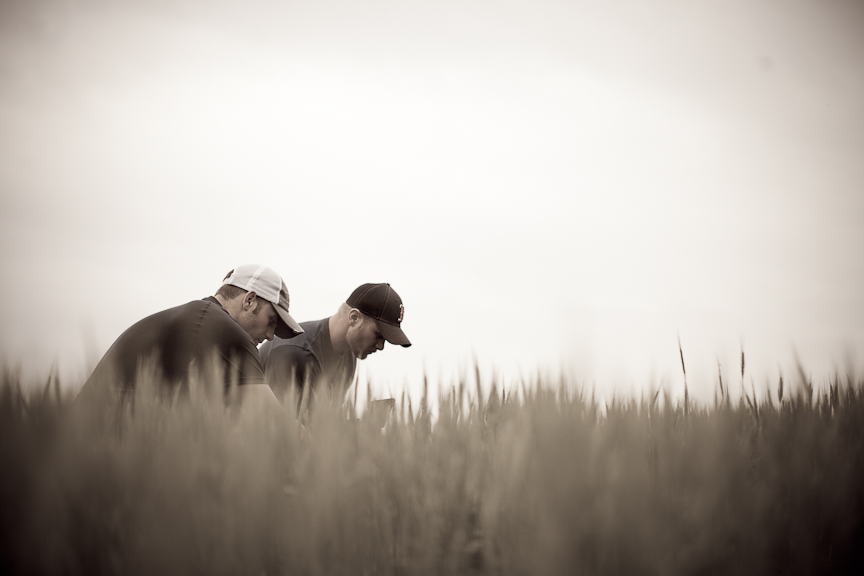 Matt and Dustin filming in a gorgeous, spring-green field of Kansas wheat.

At a time when I’m struggling to find my own explanation for this project, I think it may be best to offer a statement that Matt Smythe had written a short while back for the Vimeo page that had been created to house the promo video.  He writes:

“There comes a time in all of our lives when we let ourselves dream about living life on our own terms. When we wrestle with the decision to take a step into traffic, follow our passions and live deliberately – or simply let another day, and daydream, pass.

This promo video is the initial statement of intent for a much larger film project that will be set against the diverse, rugged and breathtaking Idaho landscape and three of its most celebrated rivers. A Deliberate Life will explore the stories of five unlikely friends who share the same love of fly fishing and their choice to lead a life according to their passions.”

Danny, keeping an eye on the baby.

It’s difficult for me, also, to truly define when this project really began for me.  If I trace back all of the different lines and connections and events that had to occur in order for this thing to happen, the trail seems to go back for quite some time.  This is likely a conversation best had around a good campfire.   It’s pretty cool, when you think about it.  All of us involved are excited about this thing.  There’s a really great energy about the whole collaboration, and it’s only beginning.  The promo video has received some really nice feedback since we started making it visible.  Last week, Matt shared the following e-mail he had received from someone who had come across the video through a blog network that he follows. 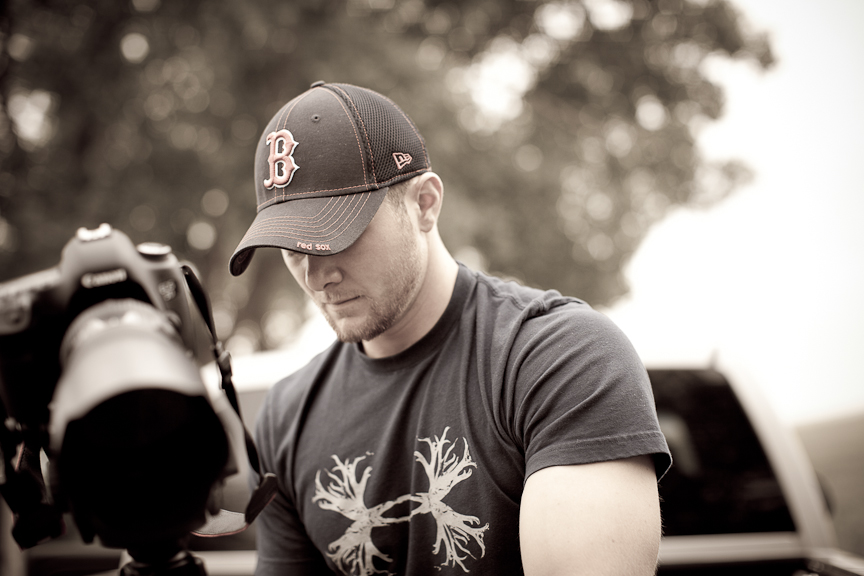 That e-mail reads:  “This morning one of the shops I follow posted the link to your A Deliberate Life trailer. The video was inspiring and hit close to home, because after 7 years in the Army, a couple of front line deployments, and 3 corporate years in and out of airports running the suit and tie gauntlet, I decided three weeks ago to no longer be that guy. The time has come to pursue my own passion for the outdoors and fly-fishing, versus “the expected.” The decision, completely outside my box and against the safe approach, finally just came easy, as also mentioned in the video. Freaked out and trying to figure out how it’s all playing out, I’m just running with it and seeing what the adventure brings.   Anyway, the only reason for writing is to voice encouragement and to thank you. The video strengthened the confidence in my own personal decision and I look forward to the final video.” 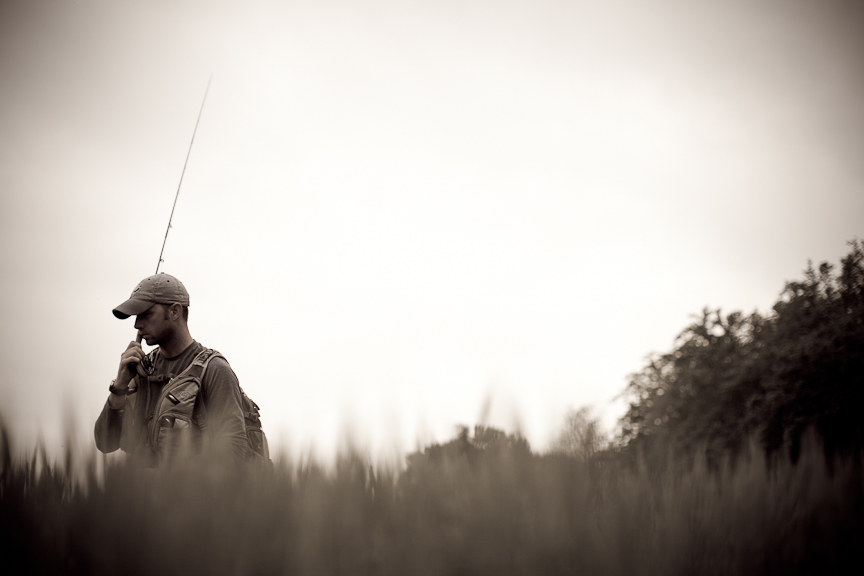 Soaking up the quiet of a fine, spring morning in-between takes.

I suppose this collaboration means something different to each of us involved.  Though hearts and minds are aligned in this mutual vision, Each person has found their way to it by their own path.  We’ve been thrust together into it somehow, though, because our passions in life have led each of us to this very point.  Next week, the path leads us to Oregon and Idaho, and for a couple of us, Wyoming after that.  (But that’s another project.)

Set up in the midst of a tiny riffle on the slider, Matt captured the one rainbow trout in Kansas getting hooked. Whew!

You’ll have to check back now and then, please, for further posts, because surely they will come as this thing unfolds and evolves.

For now, please take four minutes to see what this is all about, and watch our A Deliberate Life promo video here.

There will be much, much more to share a bit farther down the road. 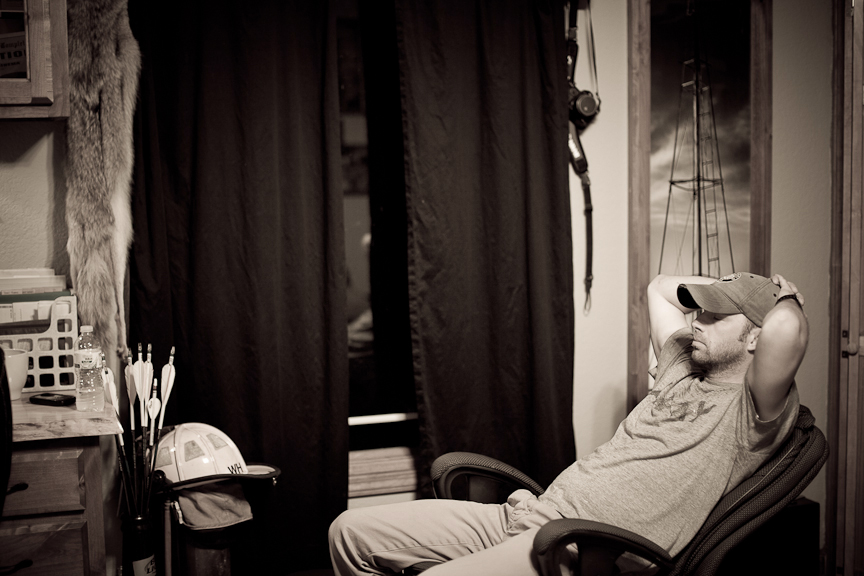 Fishingpoet, zonked out in the brain-cave at Rockhouse Motion. Hell of a journey.