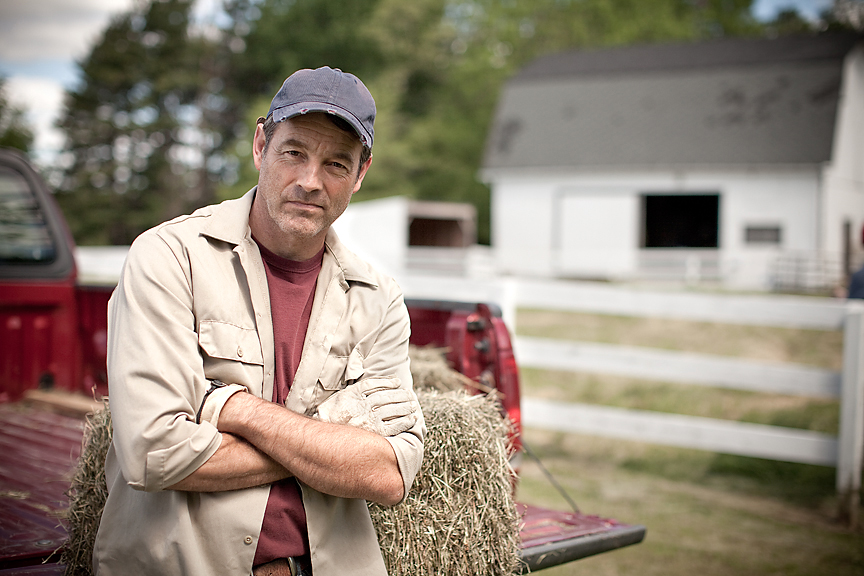 The chosen image that now resides at the Absorbine web site!

On a cool, but gorgeous and sunny morning in early June, I found myself surrounded by some really fantastic people, and photographing on a beautiful horse farm in Mendon, NY.  I had been asked by the creative team at Martino Flynn to join up with them during a video-shoot and produce some still images for an Absorbine project that would be used in print and on the web.  Absorbine is a natual, herbal liniment produced by W.F. Young, Inc., and is used to treat sore muscles and lame joints in horses.  Absorbine Jr. is a version of this pain-relieving liniment that has been re-formulated for human use.  It’s really good stuff. 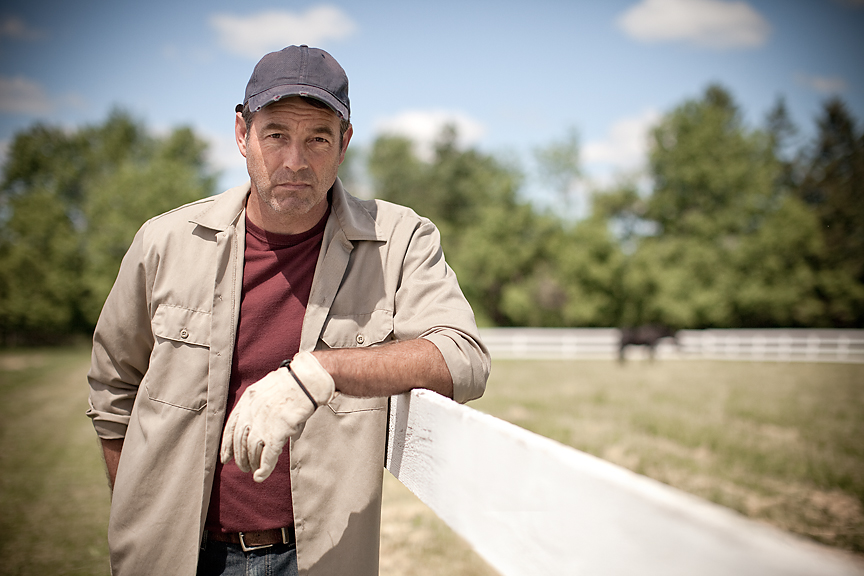 A second image that was later chosen for use in web-based banner ads.

I pulled up the gravel driveway that morning with Sara Klem, my assistant for the day, riding shotgun.  The video crew was already fairly well set up for shooting their first scene, and after finding a spot to park, Sara and I went around and got acquainted with everyone.  I would be doing photography during the video crew’s “down time” in between scenes, and walked around to the back side of the barn with art director, Chuck Bennett, to take a look at a location he had found during an earlier scout.  We talked about Chuck’s ideas, did a few test shots, found some good camera perspectives, made a plan, and while Sara and I got the gear from the truck, Chuck went back to join up with the video crew as they began shooting. 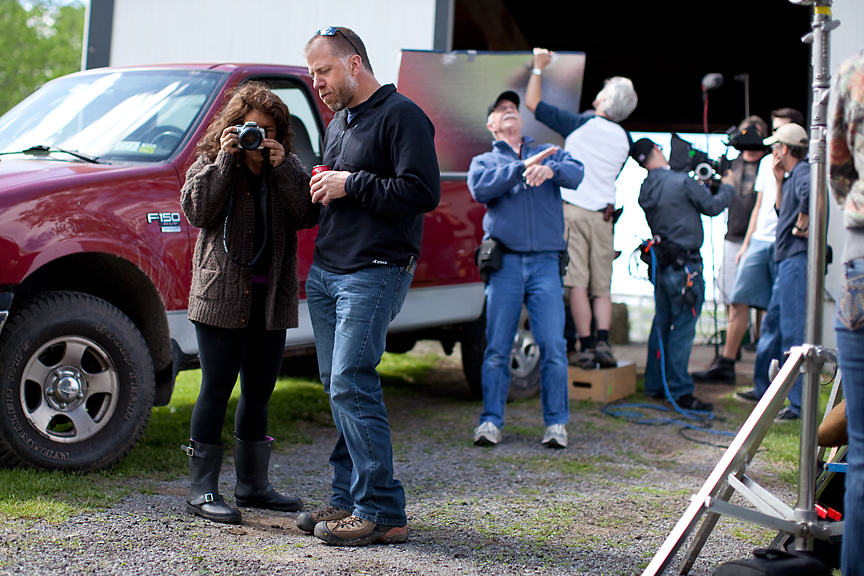 Visiting with makeup and hair-stylist, Christine Knoblauch, and trying to work a piece of granola bar out of my teeth.  Classy.

Though I had planned to photograph very simply, and use the day’s natural light to help create the desired aesthetic, we had brought scrims and Profoto strobes along with us in case we decided to take that route.  Whatever the sky was doing when it was time to shoot would help us to figure that all out!  Once we had our things in order, I shot some more tests with Sara, made adjustments, and then went we walked out to the front of the barn to watch the video crew do their thing.  I handed Sara a camera so she could shoot some production stills around the set, and she went to work. 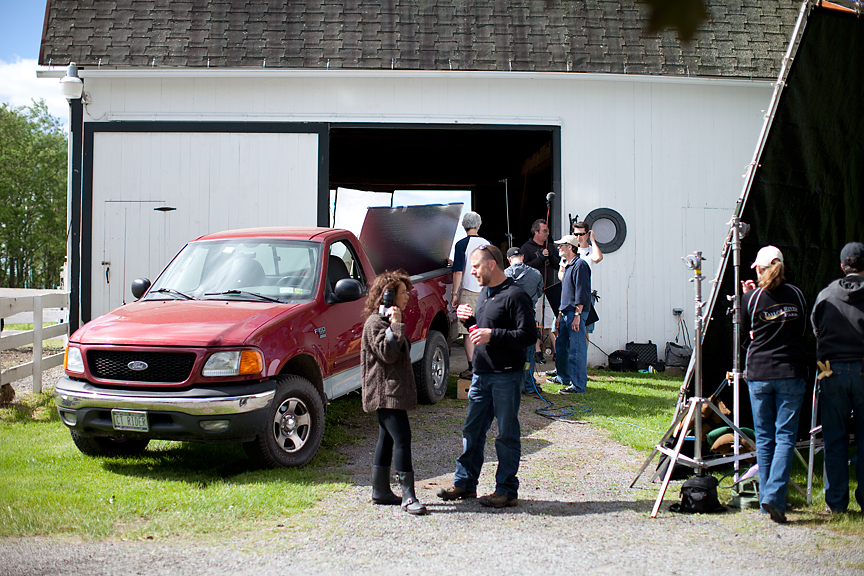 One of Sara’s shots of the “goings-on” early that morning.

Being a bit of an equipment-nerd, I’ve always had great interest in watching video crews work.  In my experience, for the most part, their equipment is a little bit different from what I normally have my hands on, and the productions themselves are done on a somewhat larger scale.  Bigger lighting stuff, fuzzy microphones, more people, trucks full of gear, fresh donuts and coffee.  Cool.  I enjoy how the idea of incorporating motion and changing camera perspective during a segment can bring a whole added dimension to the visual component.  Different thought processes, too,  from still photography in some ways. 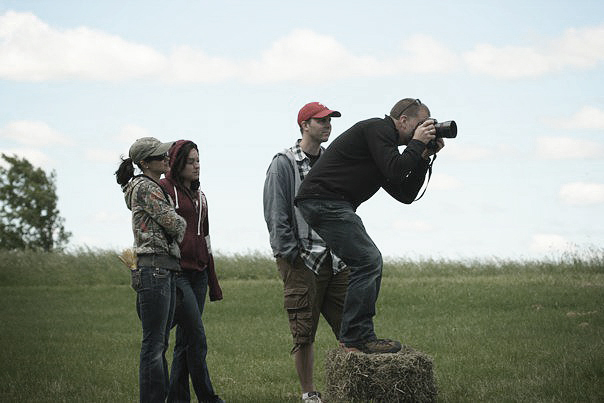 On good days, all the magic happens from a hay-bale perch. Holly, Sara, Chuck and me (L to R.)   (Photo by Christine Knoblauch.)

Well, once the first video scene had been captured, I headed back out behind the barn with Sara, and Russell, our talent for the day.  Chuck drove the farm’s pick-up truck and a few hay bales around to join us, and we took a few minutes to get the truck positioned just-so.  After talking things over with Russell for a bit, how his expressions should convey “hard work and sore muscles,” we started our own process.  We didn’t have the luxury of too much time that morning, and would need to release Russell when the video crew was set and ready for their next scene.  No pressure!  I had brought along my Primos Double Bull hunting blind to set up and create a dark environment where we could scrutinize the images on the laptop.  It worked really well, but because of our tight schedule, we didn’t wind up going back and forth to the laptop very much.  Once we verified our initial shots, I did most of my checking on the camera’s LCD.  Histograms and magnifying buttons are wonderful things!  Shoot, shoot, shoot!  In the end, the sunshine dominated the cloud cover, and the scrim was deployed to soften the light on Russell’s face.  Sara and Chuck had a challenging time holding the scrim in the breeze, but it was far faster to deploy and adjust that way than it would have been to use C-stands and sandbags.  Gotta love art directors that are so willing to help out with that stuff.  Thank you, Chuck! 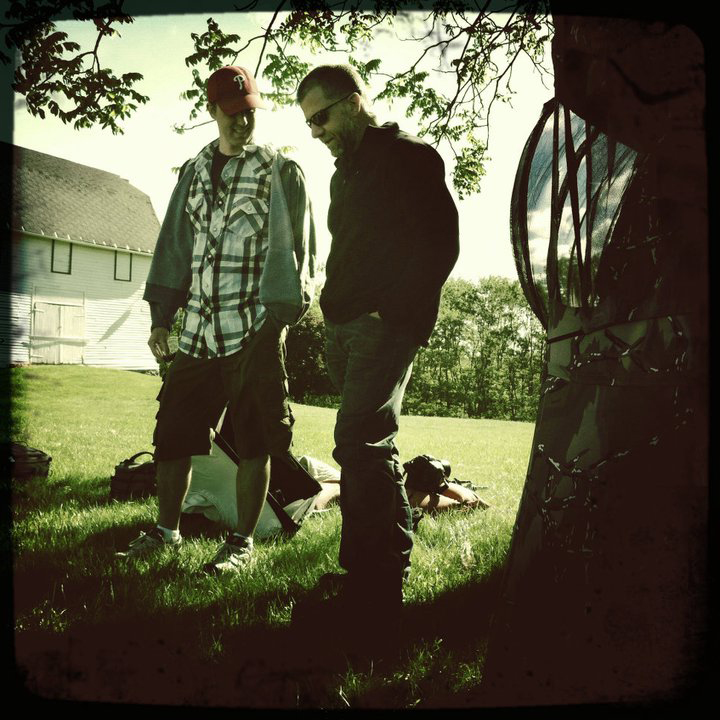 Well, when the video crew was ready to take Russell back for their next segment, we wrapped, shook hands, finished loading images into the laptop, and hauled the gear back out front to load into the truck.  Sara and I said our “goodbyes” and left to head back into the city.  I really wanted to stay a while longer at that farm.  There were so many great little spots to explore with the camera, perfect areas to photograph people, a really sweet location.  I’ve certainly got it on my list of spots to re-visit in the future.  I saw the new Absorbine commercial on television just the other day when I was at the gym, and it looked great!  Congratulations, guys!