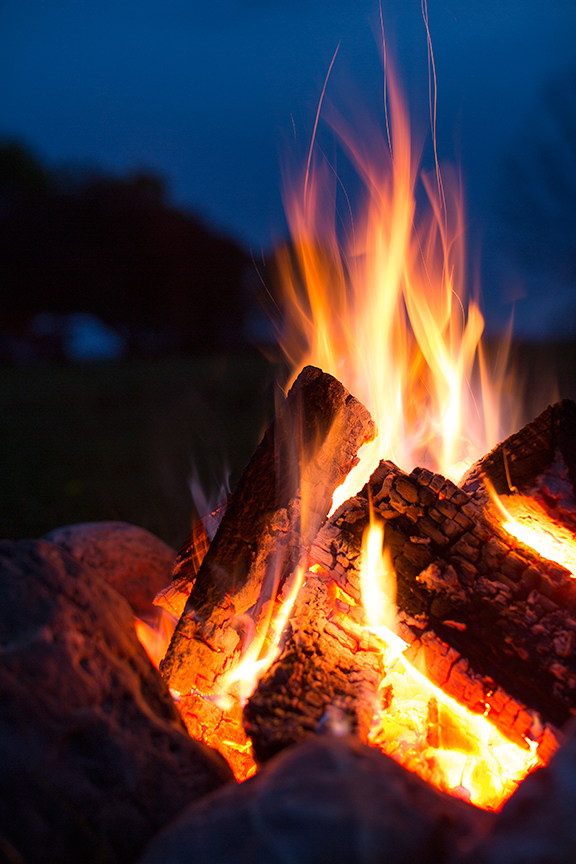 The blustery scene and biting, below-zero temperatures just now outside stand in stark, nasty contrast to the days last spring, when this body of work was created, and though I’m only separated from those Arctic-legit conditions by mere feet, the confines of my office stand as a warm, sound and cozy outpost in this barren tundra of Caledonia, NY. 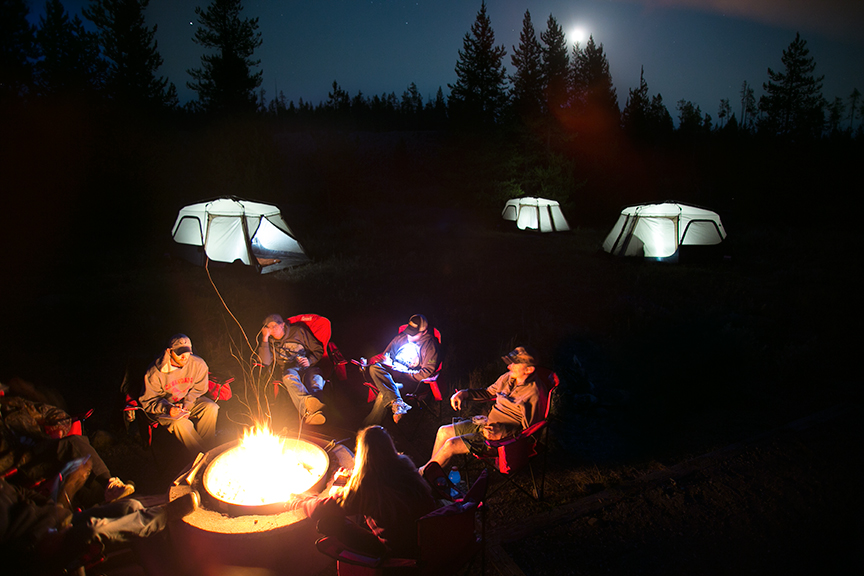 Taken during a time-lapse photography session while camping in Idaho, this image was chosen for the opening spread of Camp Sight.

Part of me would like to pretend that the conditions outside require me to hunker down here for days on end, in this remote cabin, waiting for the weather to pass, surviving on the supply of venison we have stocked, and maybe some decent wine, and having to do my work by a good fire, and the light of an banged-up, old, hissing Coleman lantern.  The reality, though, is that I’ve got a quietly-glowing electric heater keeping my office warm, and need to leave shortly to bring my girlfriend’s daughter to her volleyball practice.  So much for wilderness solitude.  I suppose my short-lived daydream is driven by the state of mind that camping can bring, and a part of me is longing for the days when I used to do more of it. 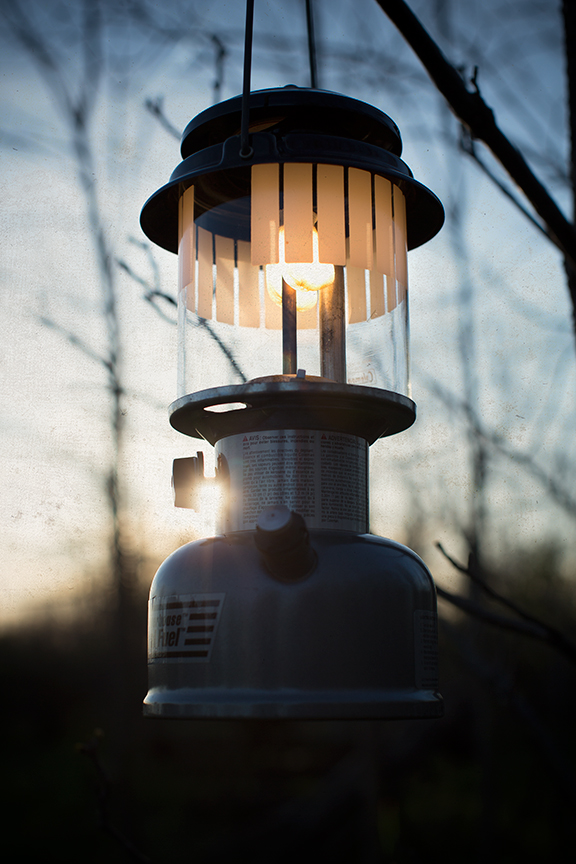 The idea of getting away to enjoy time outdoors, leaving behind the responsibilities and pressures of work and our daily lives, unplugging from our electric umbilicals, and simply allowing ourselves to relax and breathe fresh air, is such an incredibly appealing one.  A bit elusive at the moment, perhaps, but the sentiment is there for me today, and I’m seeing this wintertime inspiration as an opportunity to plan ahead – to put that early-season camping trip on the calendar and just get out there before the lawn-mowing and garden-weeding days of summer take over.  Difficult to imagine today, but those humid, pickle-making summer afternoons will be here before we know it. 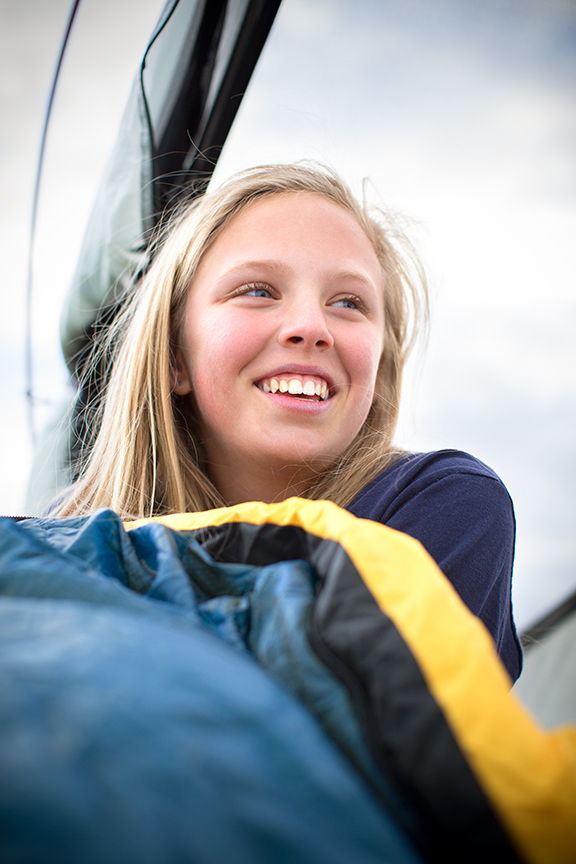 As a creative professional, one of the most important things I’ve always tried to do (for the good of my soul and sanity,) has been to carve-out time for personal work, especially when done in collaboration with good friends whose talents complement each other very nicely.  While not what I’d consider strictly “personal work,” the photography assignments I’ve had for Post, a fine, Rochester, New York – based magazine, have allowed me to do some much needed “creative-core therapy” on several different occasions – stuff that’s right in my wheelhouse, and some of what makes me tick.  In this case, the camping-related images were made to help illustrate a beautifully written Post magazine article titled Camp Sight, that was published in the July / August issue of 2014. 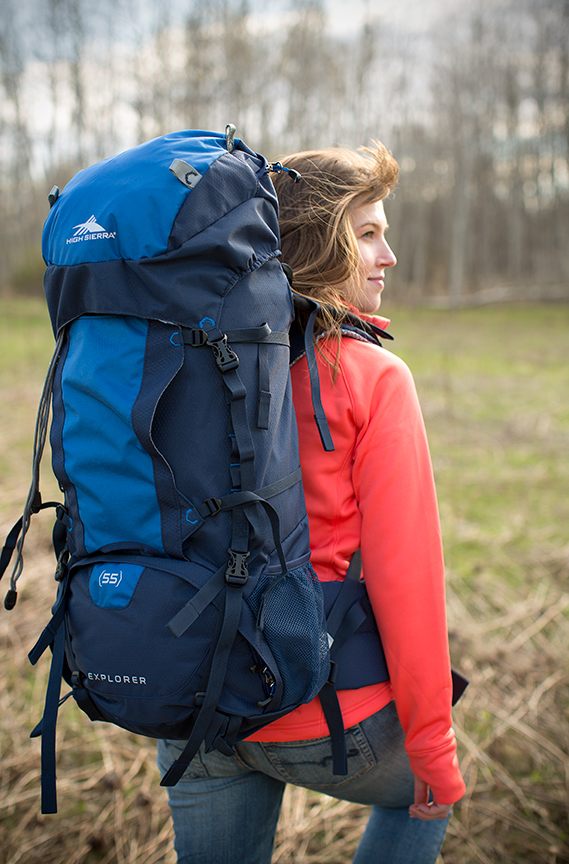 Written by Matt Smythe, and with layout and design by Rachel Spence, the article, through it’s storytelling, imagery and design, conveys the wonderful essence of camping and the importance of time spent in nature, of slowing down and recharging the soul, while offering its readers ideas and information sources to help those inspired to get off the couch and hit the great outdoors. 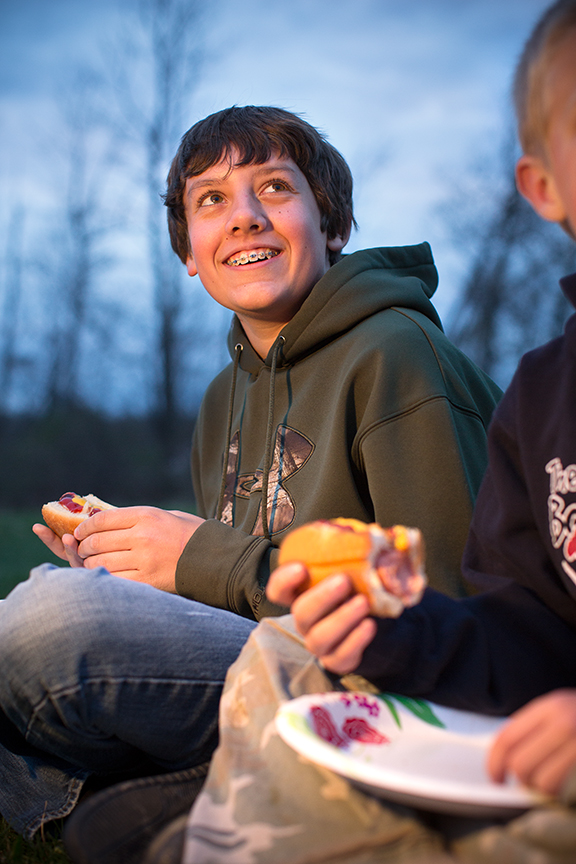 Following the direction of the story Matt had written – part of it inspired by some of our experiences camping together out west, the three of us talked about what we each thought were important points to communicate visually, and how to do that.  I did a little sketching-out of some of my ideas – the pictures I was forming in my mind, and began placing phone calls to a few friends, who would end up being my subjects for the photographs. 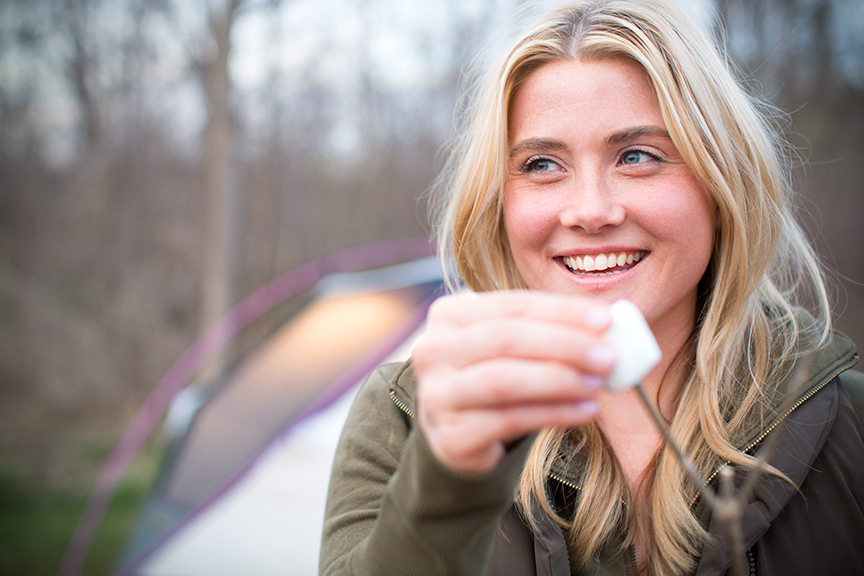 The deadlines that were being driven by the magazine’s production schedule were suggesting that I needed to get cracking and start executing the photography in late April – not exactly prime-time for creating imagery that revolves around what would normally be a heart-of-summer type of activity for most.  Trees were only beginning to bud at that point, and part of my creative thought-process was whether the lack of much greenery would detract from the emotional response we were hoping to achieve.  After a short bit, though, those thoughts had to be tossed aside, and the camera simply needed to be picked up and put to work. 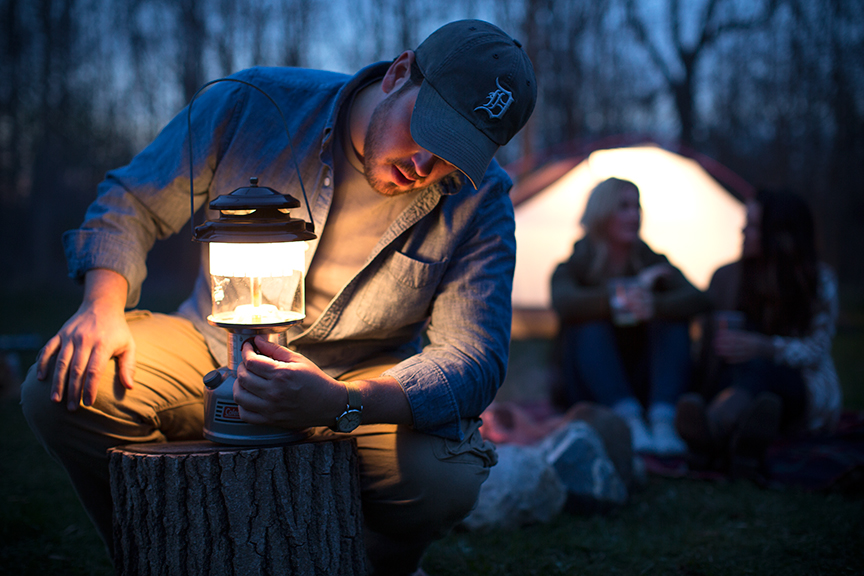 We wound up arranging five different photography sessions during a couple of weeks straddling April and May.  The first three focused on the human element – people enjoying the outdoors through camping-related activities sort of thing.  Again, because of deadlines and everyone’s real-life schedules and responsibilities, we didn’t really have the luxury of actually getting out to go camping together on a long weekend.  For the most-part, I needed to get things done in the comforts of our own back yard. 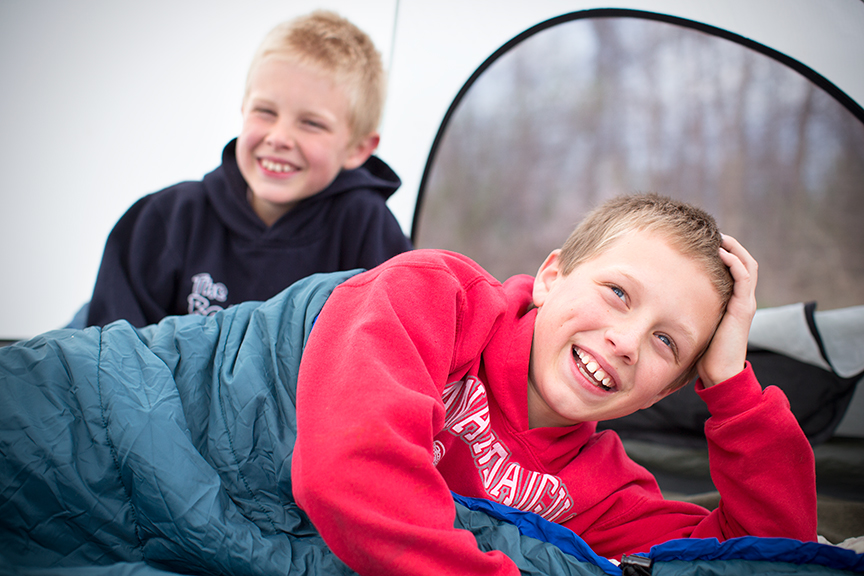 Tents were set up out back on a couple occasions, sleeping bags were hauled-out of their storage totes in the basement, firewood and blankets were arranged just-so, and grocery-store trips for hot dogs and marshmallows were made in preparation for the photo-shoots.  In-between photography sessions, I found myself re-reading Matt’s manuscript to more fully absorb the message and soul of it, and Rachel was letting me know when I wasn’t hitting the nail on the head with the photographs – keeping me visually on-track.  The project turned out to be a great excuse for us to gather up some close friends, spend some time around a few campfires, get the kids all together to roast-up some Zwiegle’s hot dogs outside, and just enjoy being out in the fresh, spring air.  After having been pretty well cooped-up during the winter months, it was just what we needed to cure the cabin fever that we’d been plagued with. 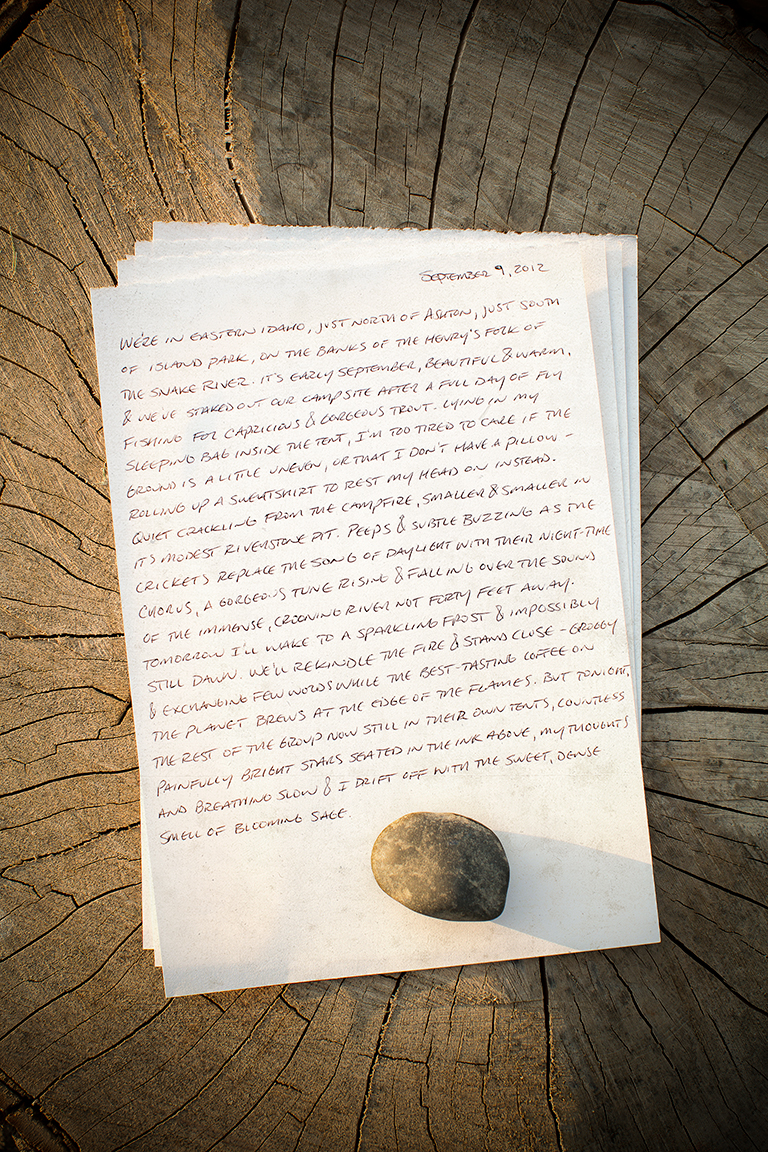 Written by Matt Smythe, the Camp Sight story began with a handwritten journal entry that was inspired by our time spent camping in Idaho.

Today might just offer some of that same relief for me.  The sun is out, the temperature is in the low twenties, and we’ve got at least a short break from the extreme-cold days that were present when I began writing this post.  Looks like a good afternoon to put the snowshoes on and explore the trails for a while, and try to soak up a little bit of winter sun before hitting a busy work week, and the returning cold.