How Do You Jazz Fest? 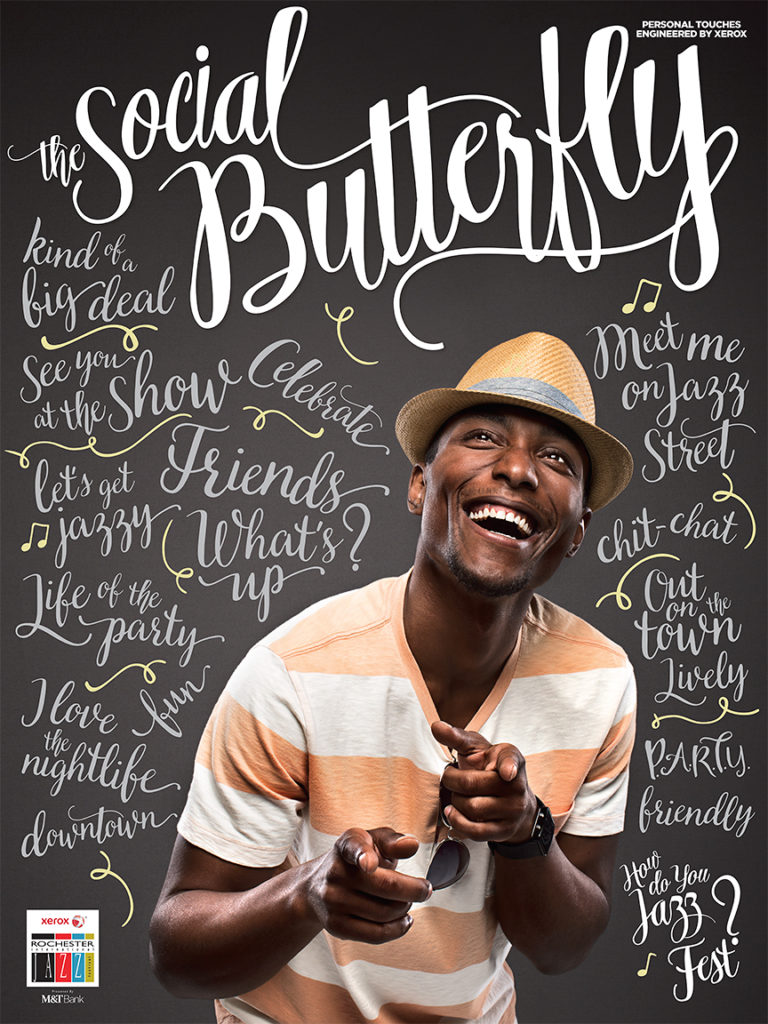 It’s all about the people, Baby! How the Social Butterfly rolls at Xerox Rochester International Jazz Fest!

It’s not too often that I’m able to write-up a blog post about a recent project so soon after having completed the photography, and it’s even less often that I’m able to post while the event that the work was created for is still happening, and the work is out on display.  In most cases, the publishing of posts is delayed for months, because of the need to wait until the client has released the work to the public in whatever manner was intended.  In other cases, it’s simply because the crafting of blog posts is delayed due to my own schedule of things.  I really love having this opportunity to sit down today, and write a post while things are still fresh and relevant and happening! 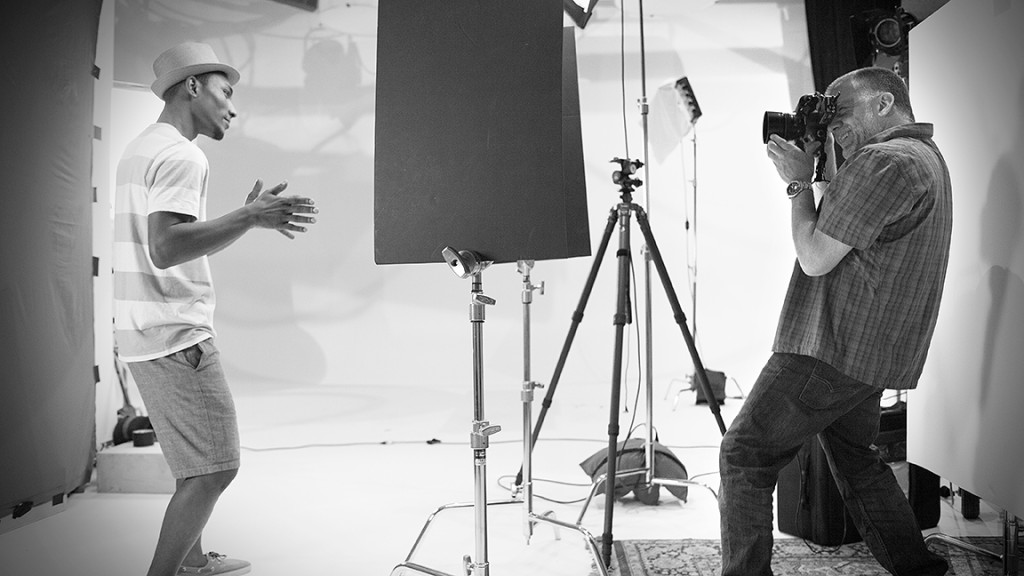 Working through a range of expressions and gestures to capture the heart and soul of The Social Butterfly.

Back in late April, (which seems like forever ago,) I had been awarded a really great photography project, and would be working with Rachel Spence, and a team of creatives from Roberts Communications, developing imagery that would be used in a campaign to advertise and support the 2015 Xerox Rochester International Jazz Festival.  The photography would serve to illustrate the personalities of five different characters that were being fleshed-out for the 2015 campaign theme, How Do You Jazz Fest? 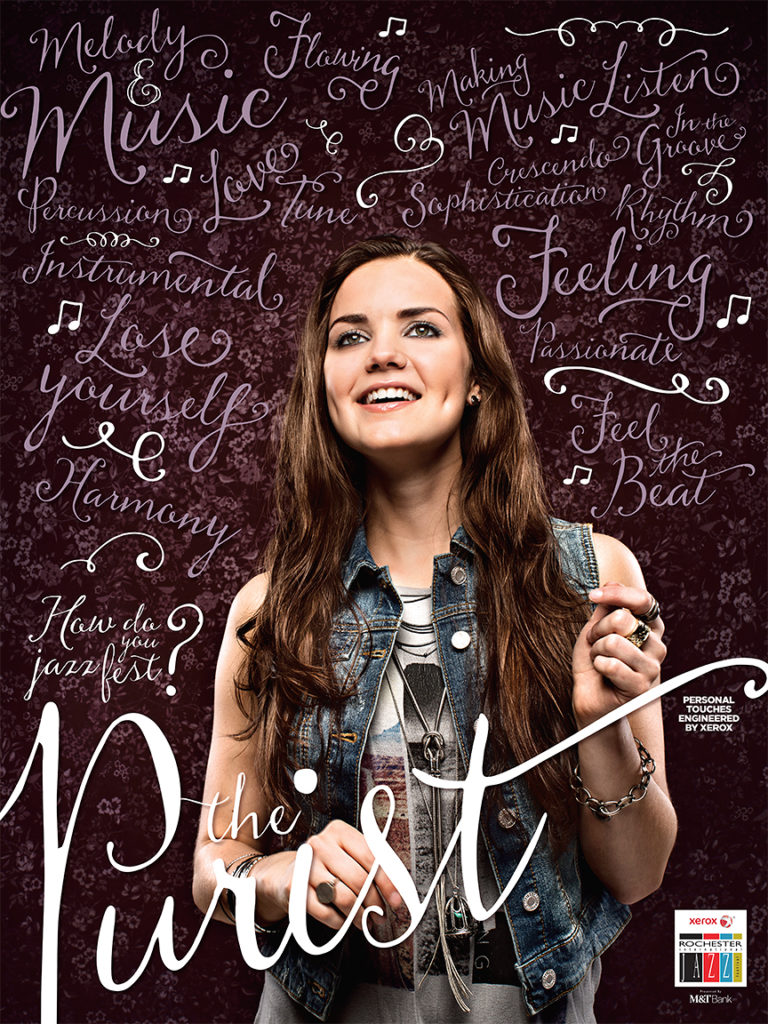 The Purist is all about the music, and she loves it all!

Each of the five characters being brought to life would represent some of the different approaches that people have to enjoying their time at Jazz Fest, and allows the audience to relate to the character that best fits their own personalities, or most closely shares in their Jazz Fest-related passions.  What is it that gets you excited about Jazz Fest?  The music?  The social environment?  The food?  Just being out in the city on a gorgeous summer evening? 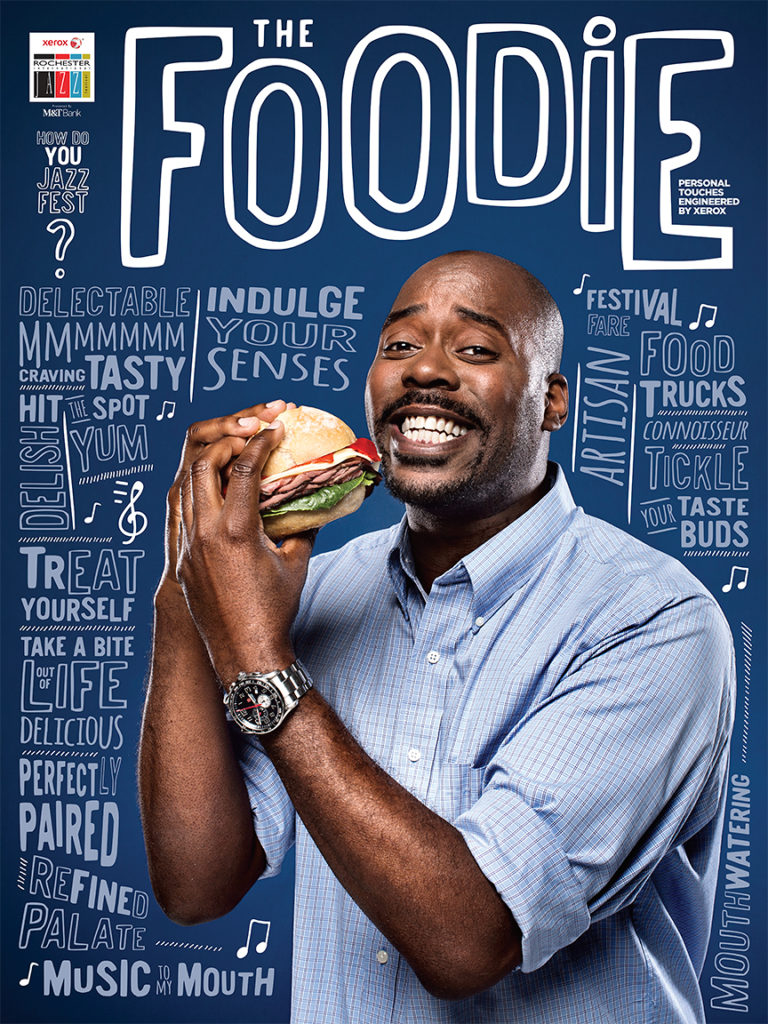 The schedule for making things happen was an aggressive one.  We needed to pull a team together and get the work done within a pretty short period of time.  I reached out to Carol Cieslinski, at PowerHouse 27 and began making arrangements for the casting, and locking-down the studio time we’d need for executing the photography.  While Carol, at the studio was busy getting things arranged on her end, I began pulling in the rest of the production team – Hair & Makeup Stylist, Prop & Wardrobe Stylist, Photo-Assistants, and a Re-toucher for handling the post-production work. 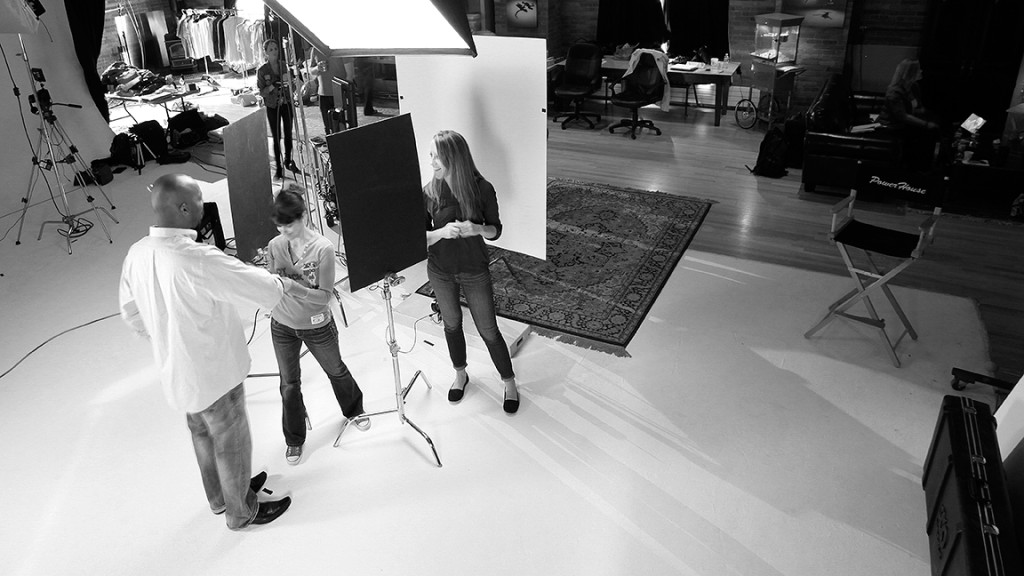 We processed over 120 talent-type people through a 5-hour casting, and with the client team from Xerox present that evening, collaborating with the creative and account people from Roberts Communications, the choices in talent were narrowed down very quickly.  Final decisions were made by the following afternoon, and I notified Carol, our Producer, who then began calling the talent agencies to let them know who we needed for the shoot, and when.  Within a very brief period of time, through numerous phone-calls, e-mails and running around, everything we needed to have in place for the shoot was all squared-away, and we unloaded and deployed the cameras, lighting, and computer gear into the studio and settled in for three days of really enjoyable work! 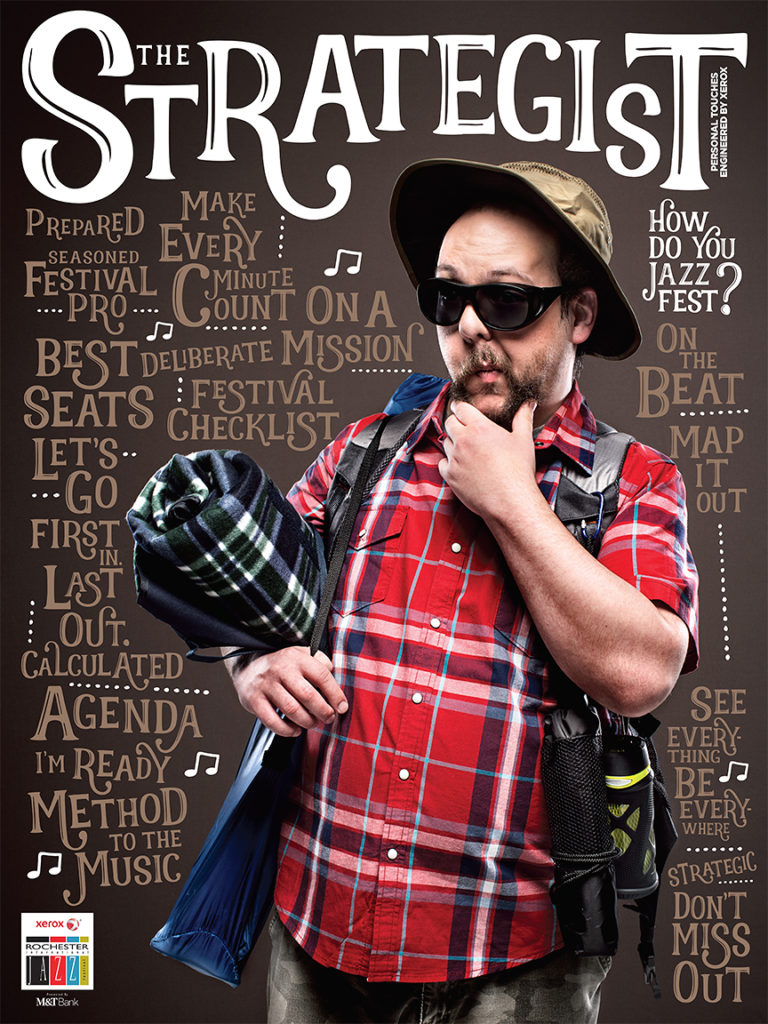 The man with a plan – The Strategist has it all figured out, and isn’t missing any of it!

Every aspect of the photo-shoot was very detail-oriented, and required purposeful thought, decision-making, and problem solving.  Lighting testing and collaboration with digital image re-toucher, Eric Barbehenn had been done during the days leading up to the actual shoot, to work-out the technique, and refine the process for achieving the overall look of the final imagery.  Careful selection of each individual that was chosen to portray each of the five characters was the next, hugely-important step in the process – finding just the right person to bring the character to life.  Each character was different from the other, and had its own set of considerations and traits that needed to be brought forth in just the right way.  The decisions that needed to be made to allow that to happen ranged from choosing the right wardrobe for each person – that involved some on-camera testing, and comparing of options, until just the right clothing combination was put together.  The background for each character was also really important in helping to set the tone, and it needed to mesh properly with the given character’s wardrobe.  Props, accessories, jewelry and makeup were next on the list, and each of those little details needed to be just right, and come together just-s0, and there was usually some back and forth in finding just the right things.  All of these little things were key elements that contributed to bringing each character to life, and visually telling the story of each. 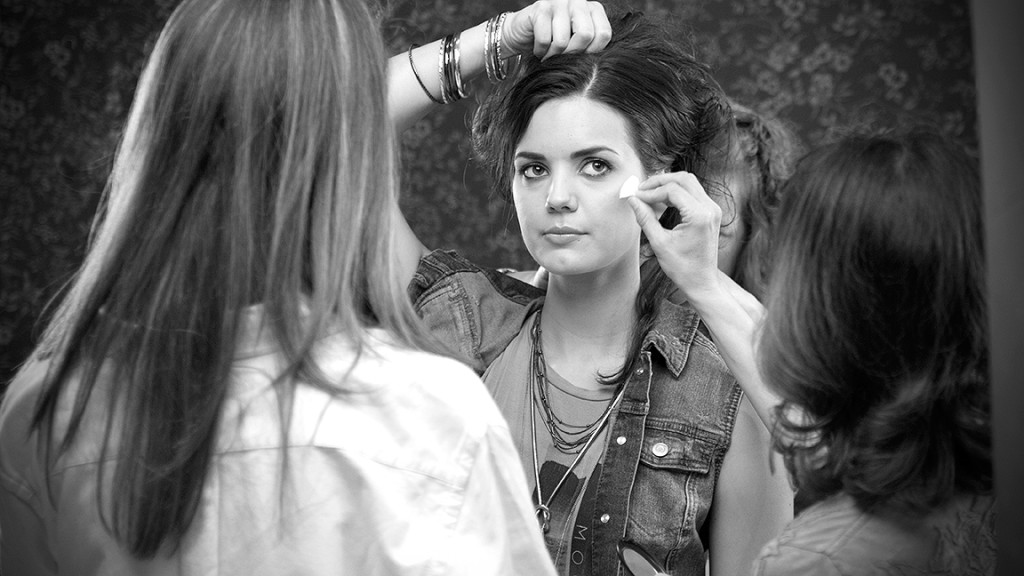 Dolling-up the Purist – Amanda and Holly do their thing with wardrobe and makeup, under the watchful eye of Rachel.

On-set, and during photography, I had my work pretty well cut-out for me, in finding and capturing the right combination of expression, body-language, energy, and soul for each of the characters, and coaxing those things from each of our talent.  I had tethered the camera to my Mac Pro for this shoot, and had my large, calibrated monitor oriented vertically, so that Rachel had a fair amount of real-estate in which to review each image as it was captured, and she could then give me feedback regarding how all of the pieces were coming together, and any changes we needed to make to get it right.  Paying attention to all the little details, the team gathered around the set while I was photographing, and every so often, either Amy, Amanda, Holly, or Denyse would pop in to tweak a light-stand, fix a wrinkle in a blouse, tuck away an out-of-place strand of hair, trim the edge of a roasted red pepper, or add some lip-gloss.  We worked on illustrating two of the characters each day, and were able to stick pretty closely to the schedule as we had planned it, turning out a series of final images that all of us were extremely happy with! 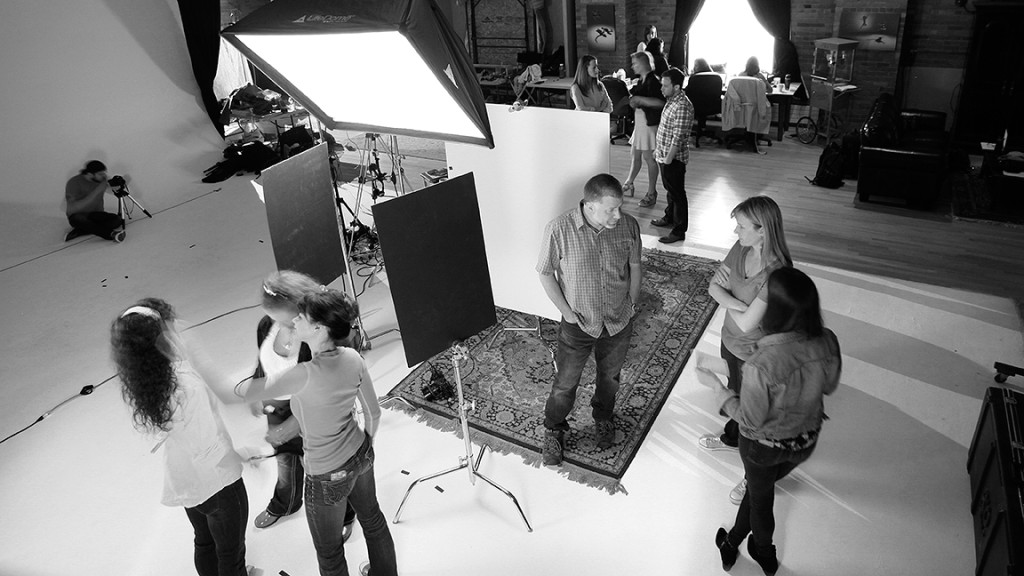 Discussing upcoming Foodie details with Amy and Denyse, while Holly and Amanda make adjustments to our Wanderer, Rachel, Liz and Kory talk things over at the monitor, and Andy works through a time-lapse capture.

It’s the kind of project that you hate to see come to an end – fantastic clients, a phenomenal team of people to work with, a great concept to follow, a gorgeous work environment, and the opportunity to do some photography that’s a bit different, style-wise from what I’m usually asked to do.  I’d love to have the chance to work on more projects like this one, and more often!  There’s a great energy that comes from the whole process, and usually a bit of a let-down when it’s all over with!  I always get such a kick out of seeing the design elements and typography combine with each image, and in this case, how they work together to tell the story of each character.  Seeing the progression of each piece coming to life, during the entire process, and then, walking around Jazz Fest last Friday night, and seeing all of the final pieces – posters, large-format outdoor signs, and tall banners hanging from the street-lamps in the festival area was really satisfying and just plain cool! 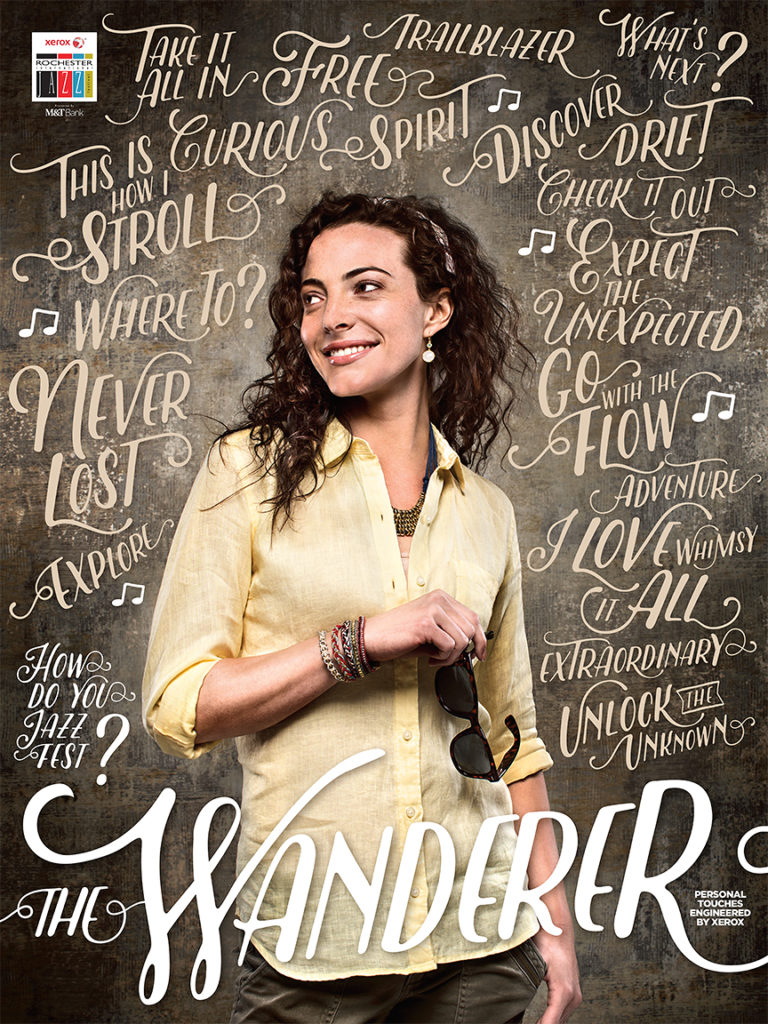 The Wanderer is happy to explore all that Jazz Fest has to offer, and takes it all in at her own pace.