Idaho on the Fly 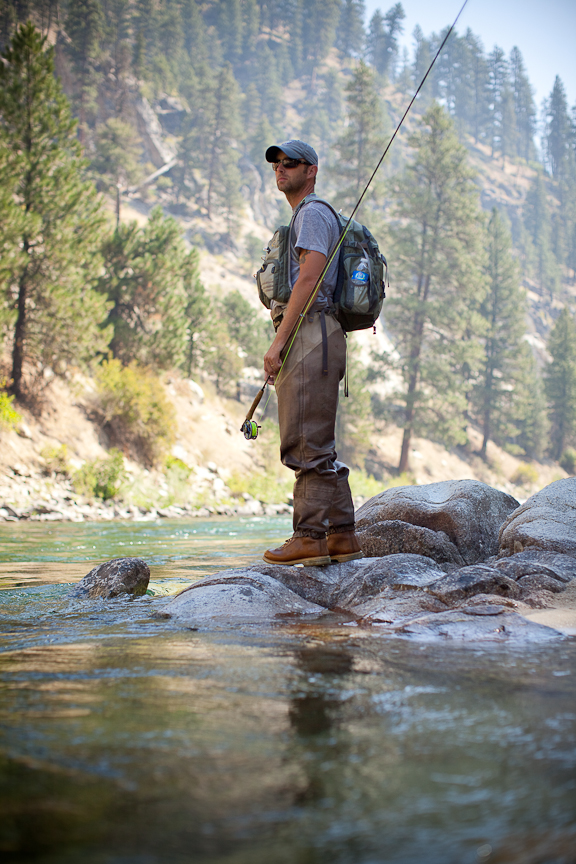 What an incredible, inspiring, whirlwind journey.  At one-thirty this morning, I reluctantly returned to Rochester, New York from a ten-day “creative expedition” in southern Idaho and Oregon.  My good friend, Matt Smythe (aka fishingpoet) and I traveled together to get face-to-face with a new client in the flyfishing industry, introduce ourselves and show work to some other potential prospects, and generate new material for our own creative endeavors.  Oh, and we went to fish. 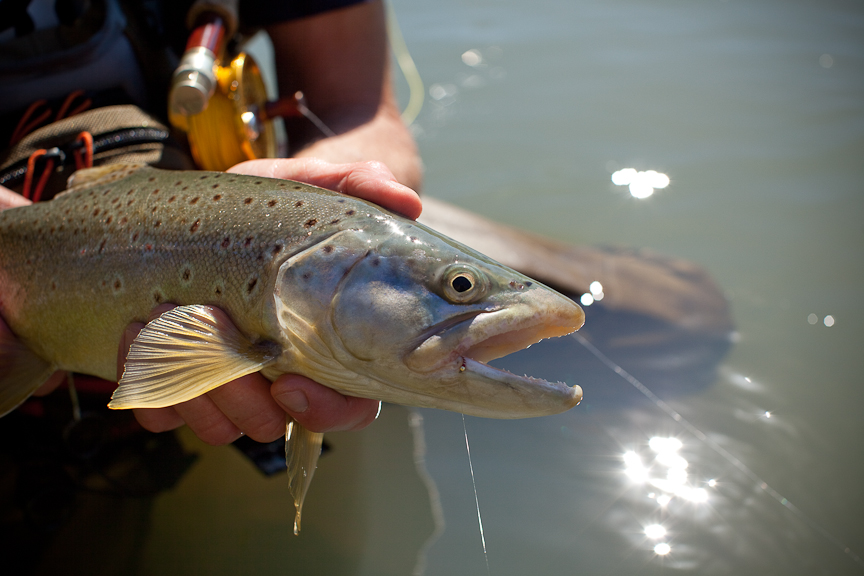 Rebecca’s photograph of me with my first brown trout. River X, September 2. 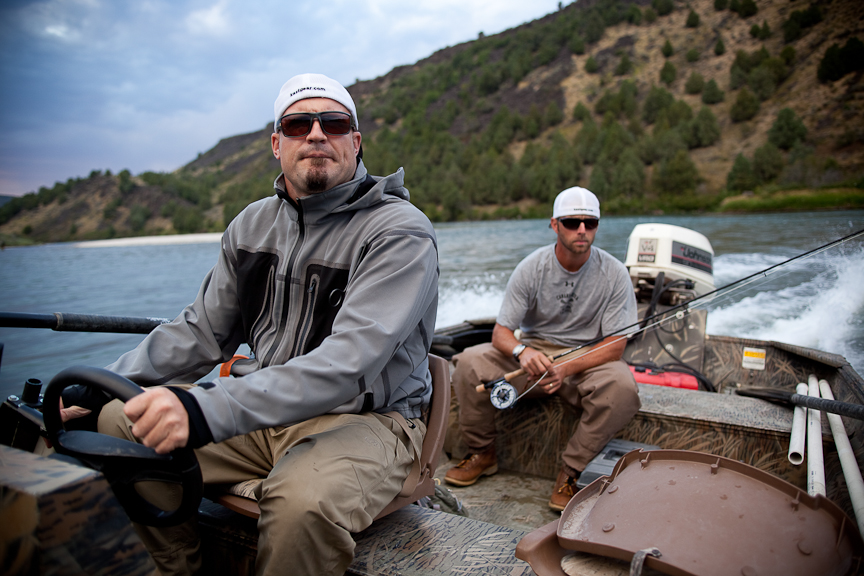 Colby Hackbarth of Kast Gear and Matt jet-boating upstream on the South Fork.

In the course our little jaunt, I created more than 10,400 photographs during seven full days of fishing on four different rivers – The Payette, Salmon, Snake, and one which will come to be known as River X.  This secretive coldwater river is a very unique fishery, set among the desert canyons of southern Oregon.  We’ve been asked to treat it like the Voldemort (from the Harry Potter series) of trout rivers.  “The one of which we do not speak” sort of thing.  Swish and flick. 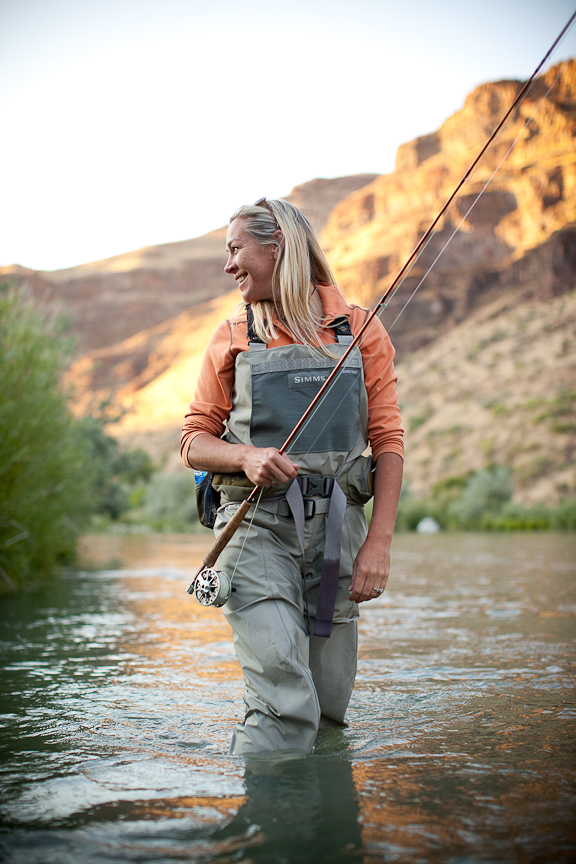 The amazing Rebecca Garlock on River X. September 2, 2011. Please check out her work at www.outdooress.com 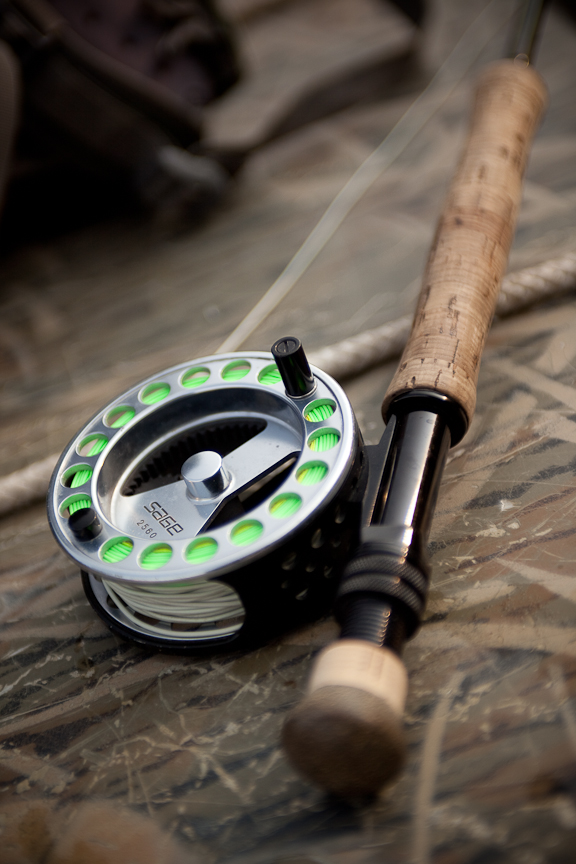 Colby’s rod that he so graciously loaned me to fish the South Fork.

We’ve come away from this expedition with some new, wonderful friends.  These folks were so very gracious, accommodating, and great to spend time with.  They were perfect ambassadors to their Idaho and their sport.  They showed us the very best of their favorite fishing spots.  They took us to dinner.  They cooked streamside lunches for us.  They invited us into their homes to gather with their families.  They invited us to college football games and stock-car races.  They hauled our asses across Idaho and Oregon without question.  They shared with us their vast knowledge of this wonderful thing called flyfishing, and pursued a common passion with us tirelessly. 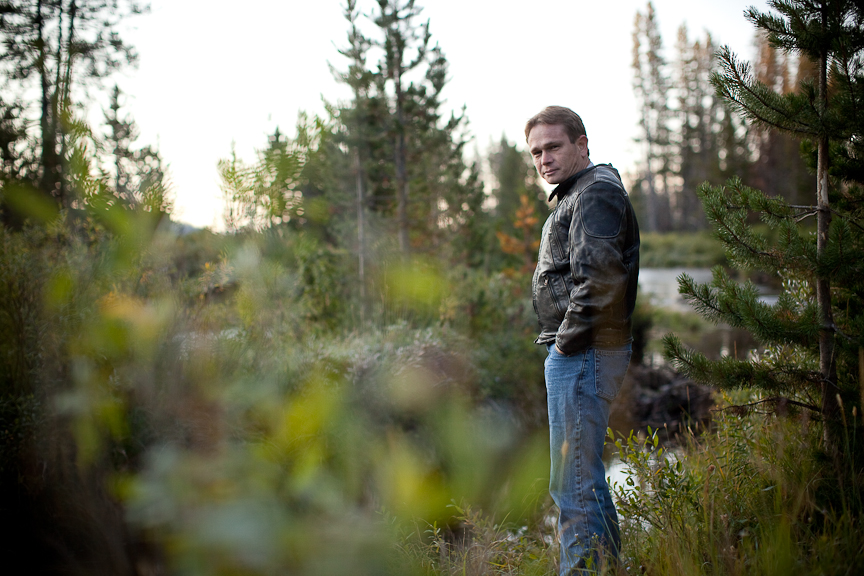 Jason Lindstrom, of Flytooth, in the Challis National Forest, September 5, 2011. 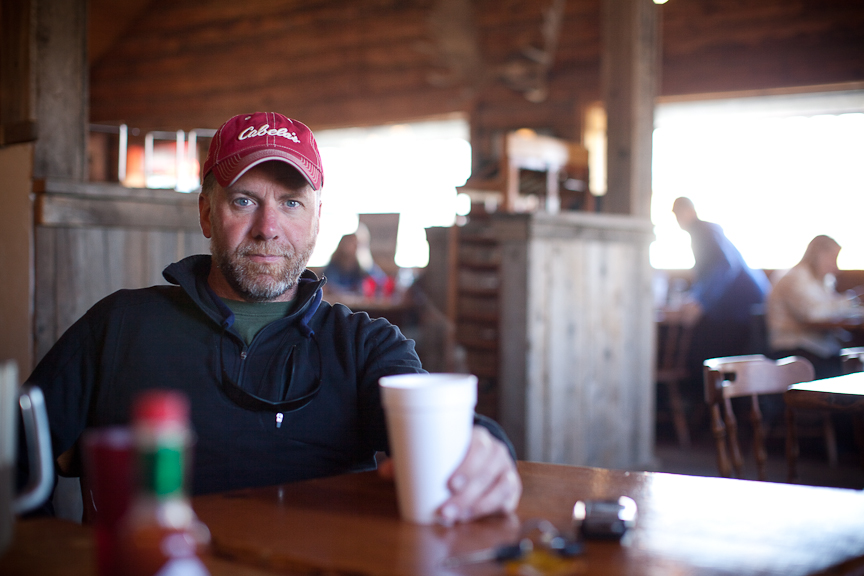 Me, during “Second Breakfast” with Jason and Matt. Sawtooth Luce’s, Stanley, Idaho. September 5.

I’m so eager to start sharing this body of photography here, but I know that with this kind of volume, a bit of time will have to pass before I’ve got it all sorted out.  There’s loads of good stuff here on this ol’ hard drive.  Two hundred and sixty-five gigabytes-worth, to be exact.  My guess is that, following this introduction, I’ll be publishing a series of several posts to break the entire expedition down into manageable portfolios and stories.  This is, as they say, a wonderful problem to have. 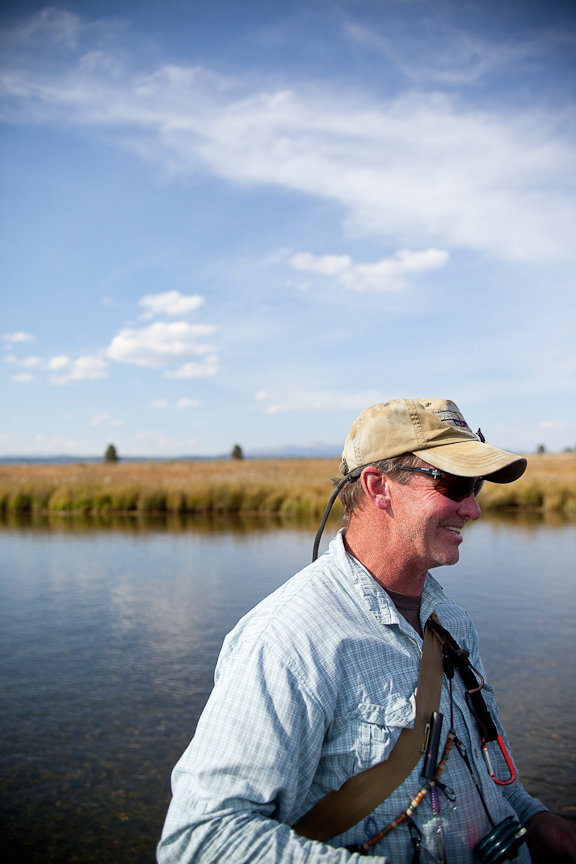 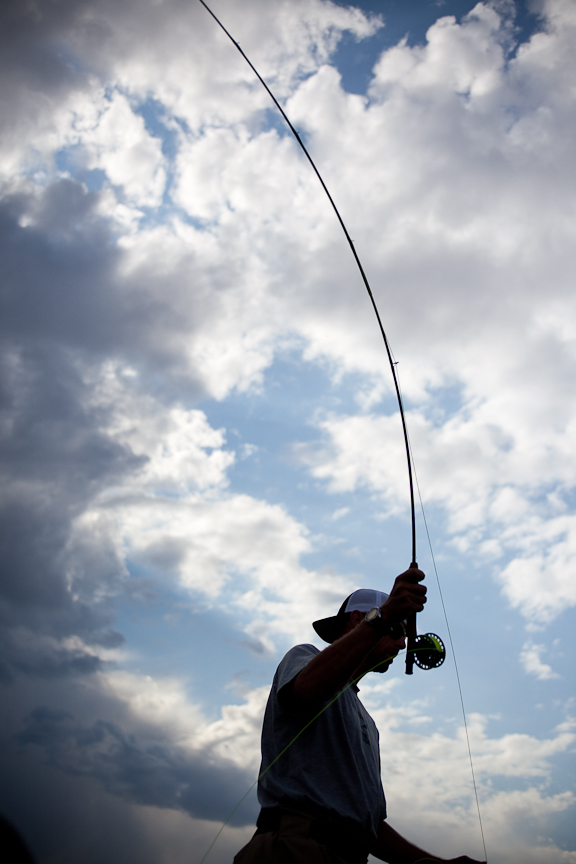 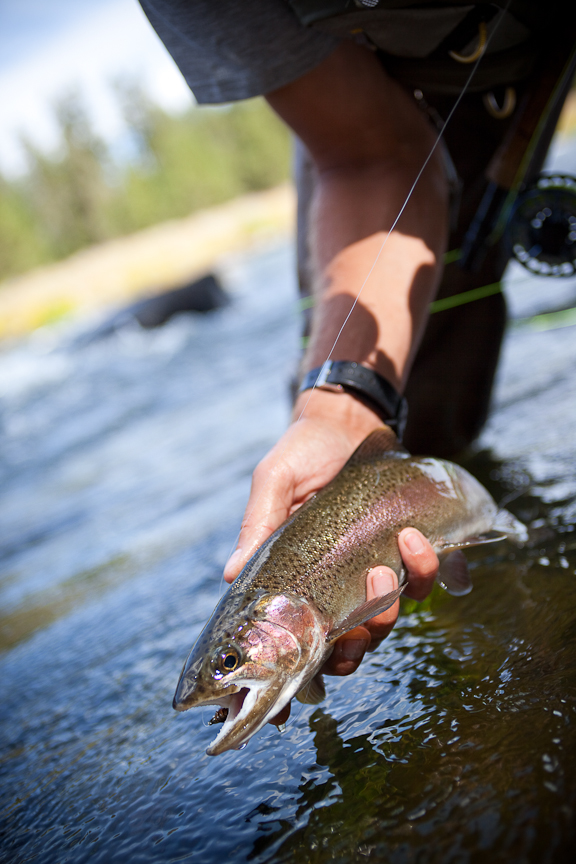 Please enjoy this handful of images for now, and keep checking back for updates.  Matt will surely be creating manuscripts of his own interpretation of our experience that you can check out at www.fishingpoet.com.  As in all of the posts published here, you may click once on an image to see it larger.

None of the fish encountered during this entire expedition were injured, harmed, insulted, or otherwise maligned.  Except, maybe for a few of the Snake River whitefish.  We called them some pretty colorful names from time to time.  Their feelings may have been hurt a little bit.  Still, they swim.

Matt’s photograph of me hooked to a bruiser of a trout that’s making upstream tracks for Montana.  South Fork of The Snake.  Thank you so very much for that beautiful moment, Colby! 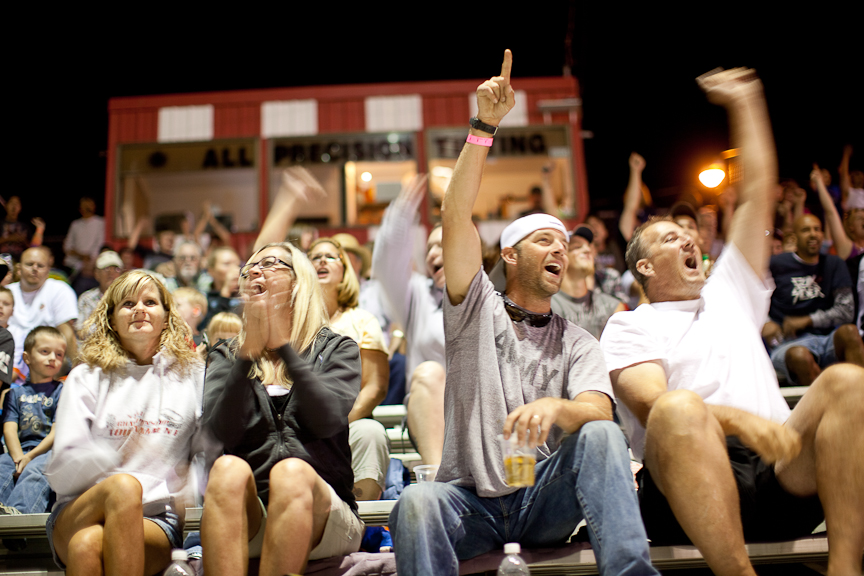 Thanks for stopping by.  Tight lines!

Having lived in Idaho for 5 years, I am so happy to read about your experiences in this beautiful state. I have since moved back to my childhood home – Los Angeles. Thank so much for protecting the name of the River that must not be named – River X. I have such fond memories of fishing there with Rich Schaff, Mike Nutto and Stephen Vance. In fact, one month before Rich passed, he sent me a photograph of River X he took on our fishing adventure.

Grant, I greatly enjoyed the sneak peak of some of your photos posted on FB. The photos say it all – what a great trip you guys had. Looking forward to see more of your work, more from your trip.

Great pictures Grant. Sure looks like you had a ball.

Grant,
Can I say it again?

I miss you guys!

I’m so glad you took so many pictures to capture the memories. Maybe by the time you get back here, I’ll have figured out how to focus the camera properly.

The Voldermort of rivers, love that!
Rebecca