It All Begins With an Egg 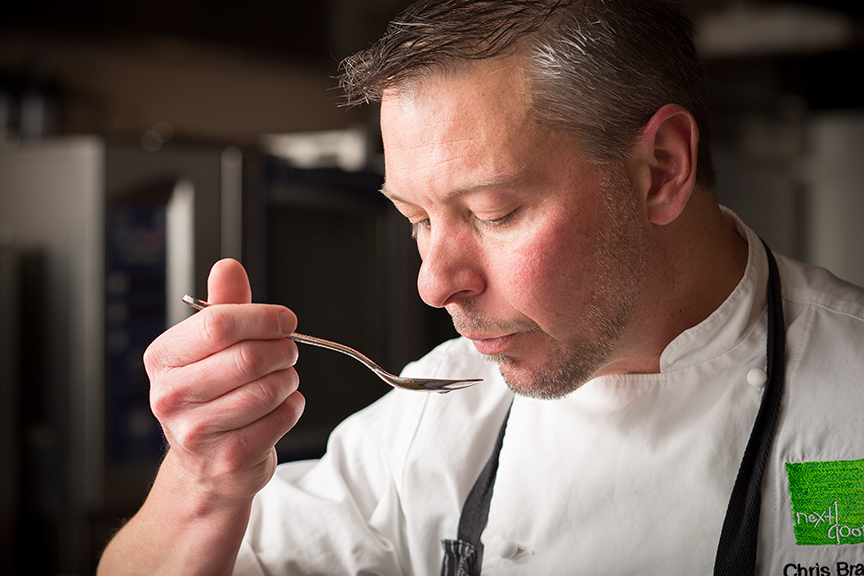 One chilly, Friday afternoon in early January, I had the fortunate circumstance of being able to work alongside chef Chris Brandt, of Wegmans Food Markets, in the cozy confines of the Test Kitchen at Next Door Bar and Grill.  I was there to create images that would help to illustrate a magazine article being produced for Post, and was working closely with Sue Gardner Smith, who was gathering up all of the important details, and would be writing the article. 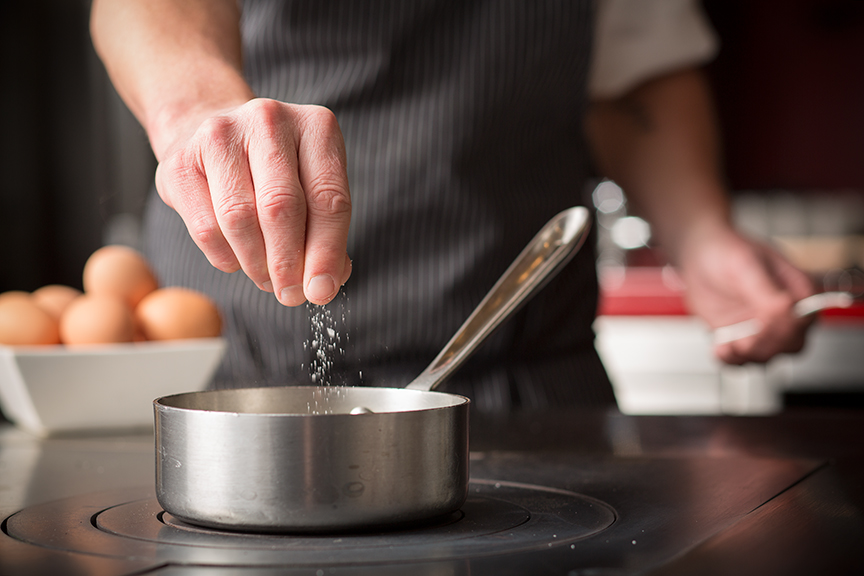 Adding a healthy sprinkle of salt to the water in the pan.

The article was to be of an instructional nature, and in this case, would guide readers through the steps necessary to properly poach an egg.  In the first sentence of the published article, Sue touches upon the fact that chef Chris has likely poached ten thousand eggs during his career.  Ten thousand!  Yikes!  My jaw dropped when he’d told us that during the shoot.  I’d say, though, that undoubtedly makes him a true expert on the subject. 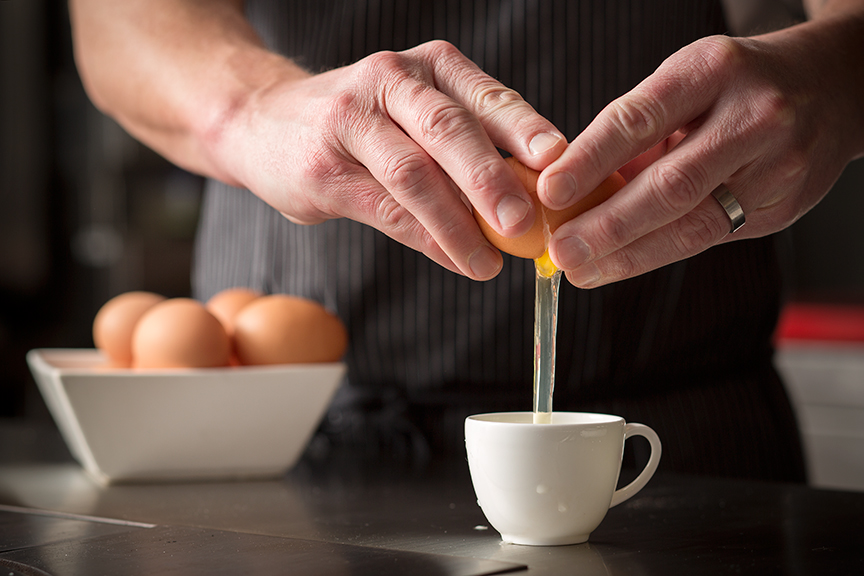 Cracking an egg into the teacup that will help provide a gentle immersion for the egg, into the swirling, simmering water.

Chef Chris talked to us for a little while about all the different steps he’d lead us through, so we knew what to expect.  I messed around for a few minutes, getting my camera and lighting all set up and tweaked, and experimented with a few different camera perspectives and lens options, while Sue continued to interview Chris, collecting all of the particulars for crafting her manuscript.

Just as we were about to get cracking, everything suddenly ground to an abrupt halt.  It turned out that all of the eggs in the restaurant’s coolers were white eggs.  Well, I’d had visions of gorgeous, little, classic brown ones in my mind for the background in the photographs, and so I decided to run across the street to Pittsford Wegmans to buy a couple dozen.  Once I’d returned with them tucked under my wing, we began our work. 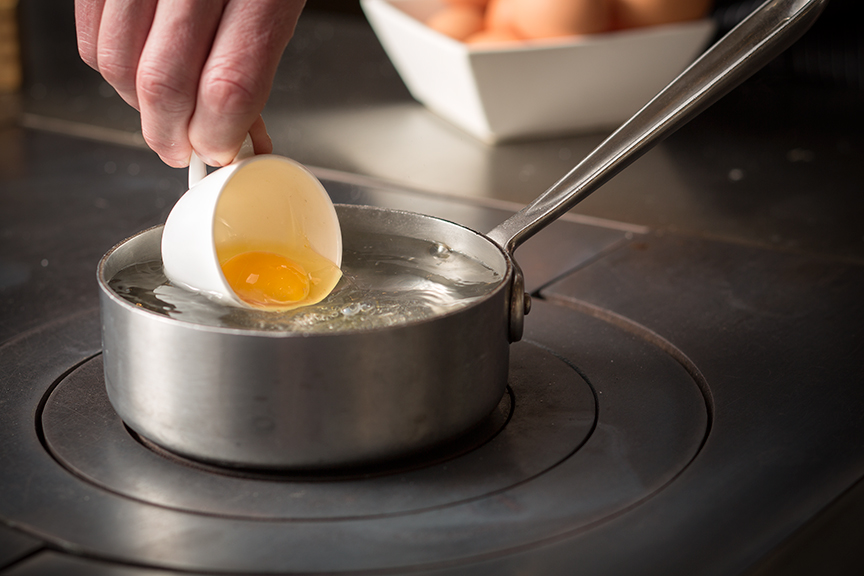 Easing the raw egg into the simmering brine.

It all seemed to just come together very simply and smoothly, with chef Chris going through the process of each individual step.  Right away, in the first little group of images, I found the perspective and look that I really liked the feel of, and that set the tone for the rest of the images to come.  I was reviewing images pretty frequently, making sure that I was capturing the right overall look of each step, and that all of the little details were just the way I had wanted.  On more than a few occasions, I had asked chef Chris to repeat the same step a handful of times, so I could capture some variations of the shot, or to get the raw egg running out of the shell just-so.

The format of the magazine is a good deal different from the format of my camera’s sensor – it’s rectangular, but not as long a rectangle as what the camera captures.  Because my instinct is to purposefully compose an image in-camera, and because there’s always a chance that one of the images would be used full-bleed, I needed to keep that different ratio in mind.  During our shoot, there was a great deal of “Alright, let’s move the egg bowl over this way a few inches, Chris, your hands need to be just here, and not any higher, let’s pop this plate up just a little more, and now, let’s move the eggs back over this way some, and put that teacup right there, please.”  Oh, and smile. 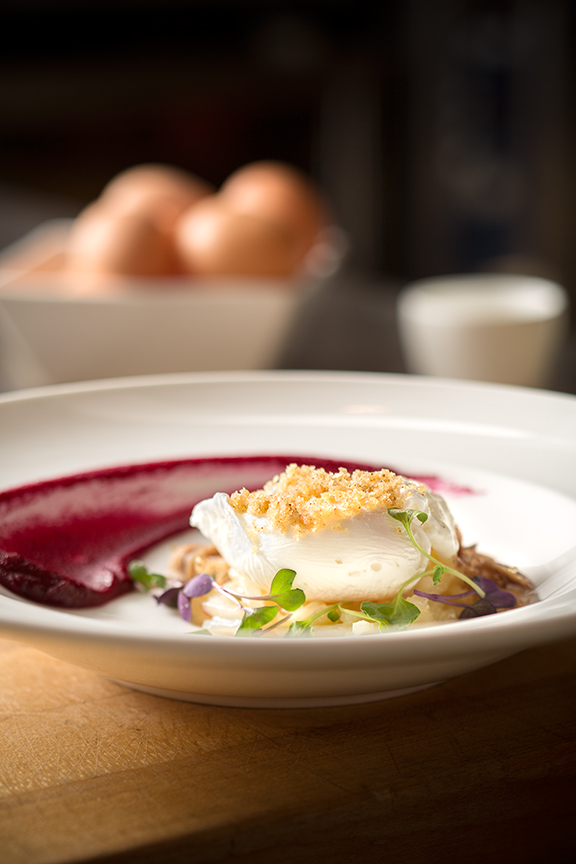 From Next Door’s dinner menu – a Poached Wegmans Organic Farm Egg accompanied by all the right stuff.

After I felt that I’d had what we needed for the instructional part of the article, Next Door‘s Chef de Cuisine, Zachery Dick brought in a plated appetizer recipe that he had developed, (found on the restaurant’s Dinner Menu,) that featured a poached egg from Wegmans Organic Farm, potato “risotto,” red beet purée, brown butter bread crumbs, and duck confit.  Accompanied by a sprinkling of beautiful, little Organic Farm micro-greens, the colors and textures on the plate were really just wonderful, and I was imagining that it all tasted just as good as it looked.

I had wanted to make some nice, relaxed, candid photographs of chef Chris to be used in the article, and we worked at that for a short while next.  I began with some straightforward portraits, having him look right into the camera, and then we changed things up slightly by having him carry on a conversation with Sue, who was standing off my left side, closer to my light.  Those were the shots that I really gravitated toward, and were among those submitted for further selection by the Post‘s newly-appointed Photo Editor, Hannah Betts.  One of those was chosen for use on the magazine’s Contents page, just inside the front cover.  This was a really, really fun project to work on, and I’m so looking forward to the next one.  This had been the first “food-instruction” article that Post has published among its nine issues, and it sounds as though the intent is for the piece to be a permanent fixture – featuring food preparation instruction from some of Rochester’s top chefs. 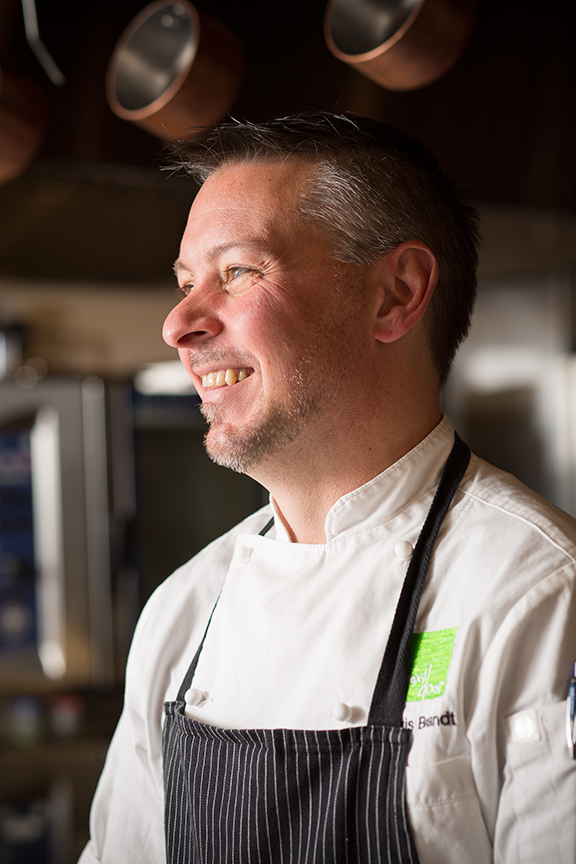 Chef Chris Brandt, visiting with Sue, in the Test Kitchen at Next Door Bar & Grill.

The March / April issue of Post, that includes this instructional article, and a wealth of other interesting and beautiful things, just hit newsstands on Monday, and can be found at most local Barnes & Noble locations,  Abundance Co-Op, Hart’s Local Grocers, Lori’s Natural Foods, and area Wegmans locations.