Jinelle, Her Saw, and a Good Tree 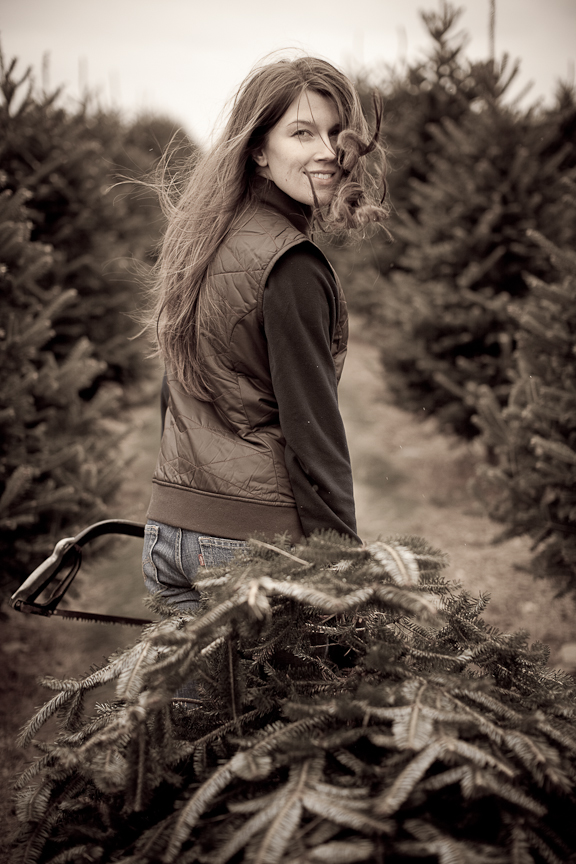 Though windblown, hungry, and colder than heck, Jinelle is very proud of her perfect Balsam Fir.

The heady scent of the Balsam Fir pitch on my hands still hangs in the air, and I’m not going to wash it off.  I’m savoring it as long as I can.   Just this morning, “Stage Two” of the new personal project was underway at Stokoe Farms, in Scottsville, NY. 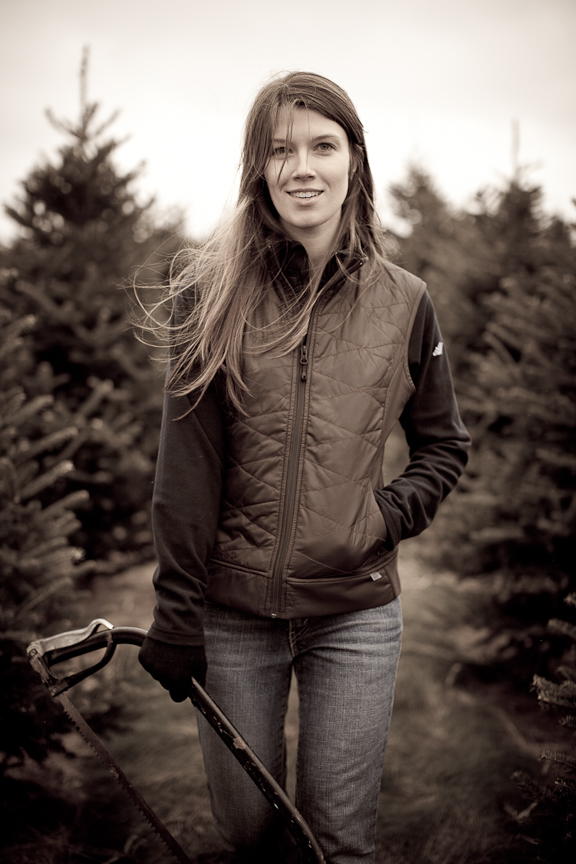 I had connected with Jinelle Shengulette a short while ago because I was interested in photographing her for this new outdoor lifestyle portfolio that I started to build a couple weeks back.  Today’s activity and story revolved around the hunt for and harvest of a beautiful Christmas tree.  Surely, I had wished for some snow on the ground, and in the air.  Sometimes, though, the ideas come to the brain a bit on the late side, and for us, this time of year, the weather seems to be on a warming trend, with no snow predicted in the foreseeable future. 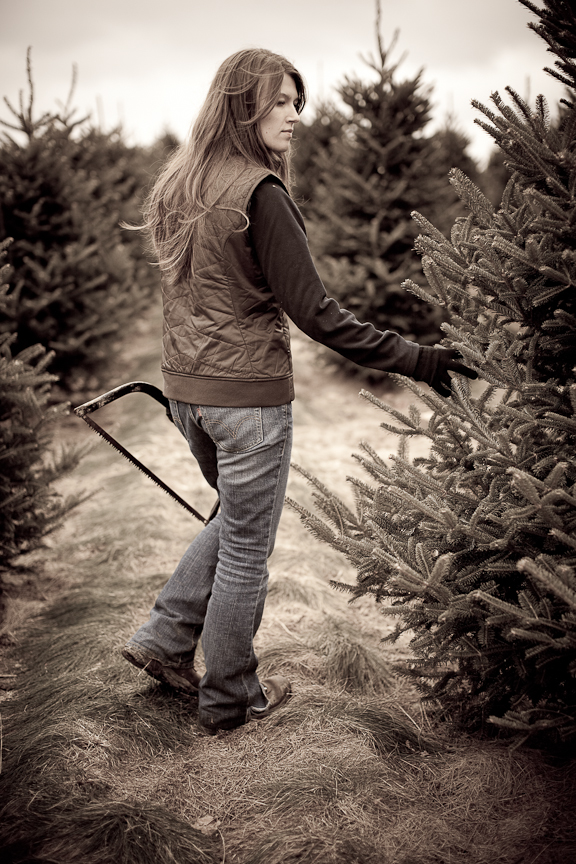 When I picked Jinelle up at 8:30 this morning, the cloud cover was thick and dark gray.  The air was chilly with a damp wind.  It was just plain gloomy.  I was focusing on the knowledge, though, that sometimes the conditions can change abruptly, and that if you’re very fortunate, magic still happens.  Somewhere, deep down, I knew that the snow I had wished for would come.  It didn’t, in the end, not until late that night, but it was that hope that kept us moving forward.

The Slayer of Spruce.

We pulled the Tundra up to the Starbucks at Monroe and Oxford, and piled in to pick up a Venti Pike, (black,) Tall green tea, two bottles of water, and a pair of turkey bacon and egg white sandwiches.  Good to go.  The trip to the tree farm in Scottsville would only take about half an hour.  Hopefully, by then, the sky would be brightening some. 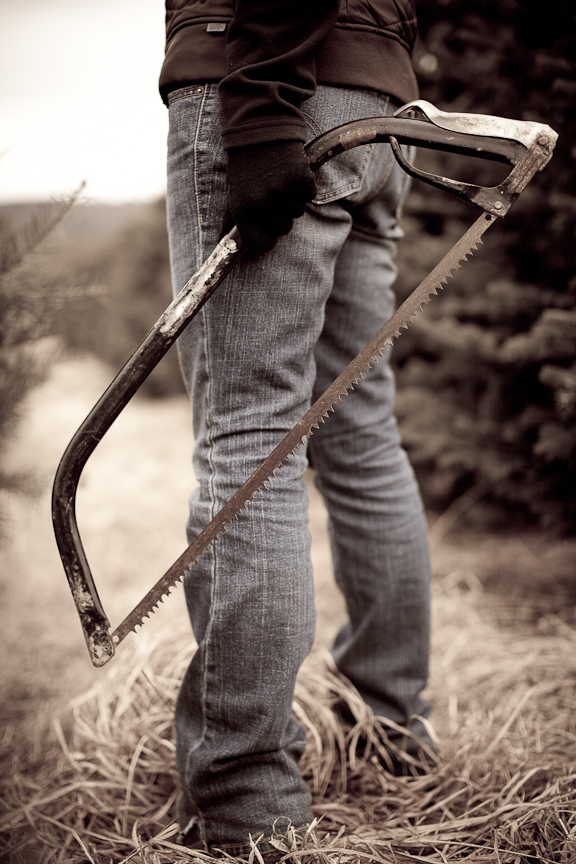 I took great pleasure in the thought that we might be the only people on Earth cutting a Christmas Tree today.

We arrived a bit early at the farm. Jinelle and I  sat in the truck, visiting about music, sipping our hot beverages, and waiting for Larry Stokoe to show up.  I had made arrangements with him earlier in the week for our shoot, and needed to hand him some money for the tree we had planned to cut.  Larry showed up smiling ear-to-ear, in his red Chevy pickup, and I think his smile might have brightened a bit further when I introduced him to Jinelle.  I suppose she has that affect on a fella.  The three of us talked for a bit about our intentions for the shoot, about how the deer have been wreaking havoc with some of the farm’s young Douglas Firs, about the long winter, and the approaching spring.  Larry bade us farewell and headed off to church.  It was just Jinelle and I now, with a good saw, a story to tell, and a few thousand trees to choose from. 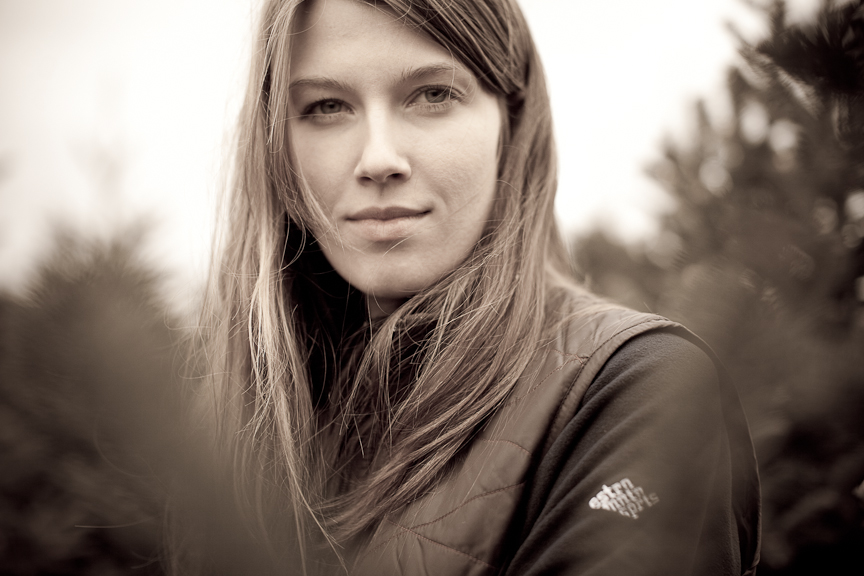 Jinelle doing her “Radiating from Within” look. 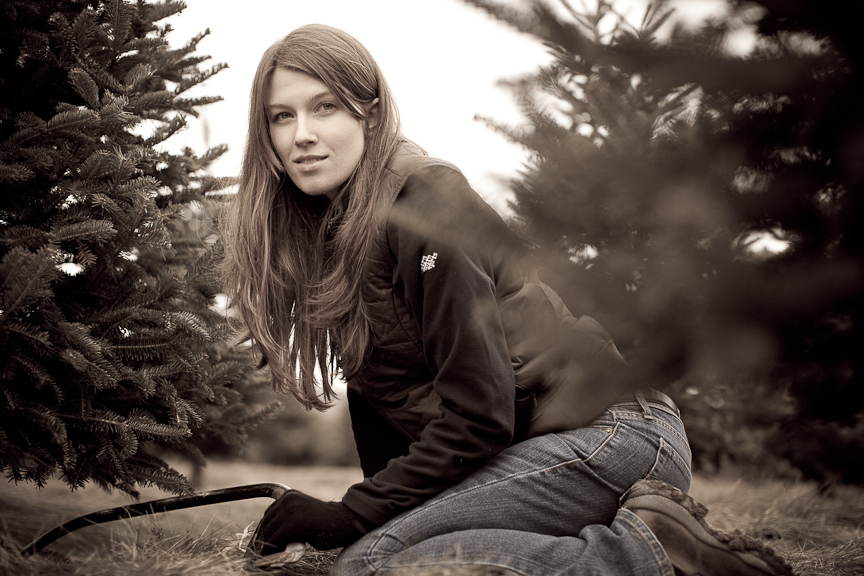 At long last, the perfect tree was found.

I had formed in my mind, the stages of the story that I wanted to create images for, and we set out to start the process.  Though it’s new, and not “perfectly defined,” I’m thinking of this body of work as an outdoor lifestyle piece.  The resulting images might be similar to those you’d see in a point-of-purchase display at Eastern Mountain Sports, an LL Bean catalog, fashion editorial, that sort of thing.  It’s evolving and growing by the week, and I’m enjoying it tremendously.  I want the images to have a balance of guts, spontaneity, expression, serenity, heart, and fun. 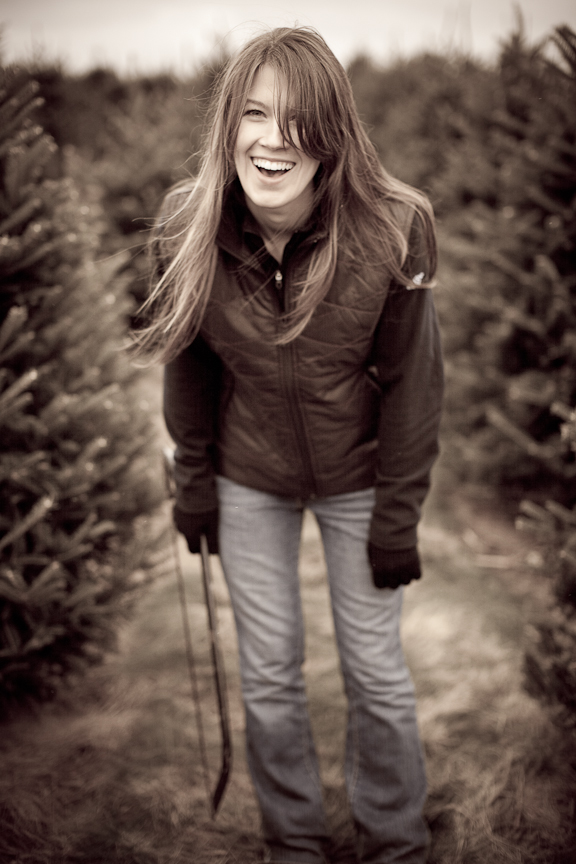 This is a woman who loves a good saw.

The wind was damp and cold today.  It got through to your bones.  The “Little Hotties” I had picked up for Jinelle’s pockets kept her hands warm, but didn’t do the rest of her much good.  We’d shoot for a bit, and then, when I saw Jinelle start to shiver through the camera lens, I’d call a break, hustle back to the truck, crank the heater, and load images from the CF card into the laptop.  The pulse or rhythm of the day seemed to work really very nicely.  Cued by Jinelle’s shivering, we had the opportunity to create, pause, evaluate, make changes, and shoot more, until I was certain I had the images I wanted.  In the truck, we indulged in Snickers bars as we ran through the images in Adobe Lightroom.  As I watched the images pop in to the contact sheet on the laptop, I could see Jinelle in the periphery, sitting in the passenger seat, shuddering occasionally from some deep internal chill. 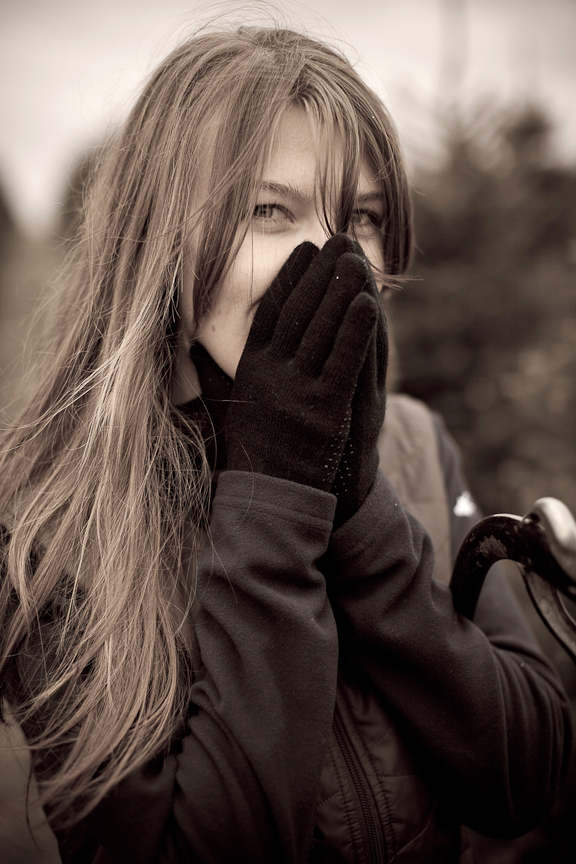 Finally, we found just the right tree to harvest.  It’s a really sweet Balsam Fir that had a personality Jinelle gravitated toward.  It smelled just wonderful.  Jinelle did an expert job of cutting it.  I had her haul it around for a while, as I photographed her for the last segment of the story.  Back again to the laptop in the Tundra.  We reviewed the images and decided that we were done.  Done and hungry.  On a day like today, with damp, chilly, windy conditions, we both had a hankering for some good, hot soup.  We made the drive back to Rochester, and walked into Magnolia’s around 3 PM.  Jinelle had ordered their amazing tomato/basil/artichoke soup, and I opted for my favorite chicken vegetable with pastina.  We split a Baker Street sandwich, (grilled roast beef,) and were very, very satisfied with all of it!  After dropping Jinelle off, and despite my desire for a good nap, I came home to edit our 700 images and write this post.  I’ll continue to share the rest of the project here as it develops, and look forward to figuring out the next step!  Thanks for a great day, Jinelle!  I had a blast out there with you! 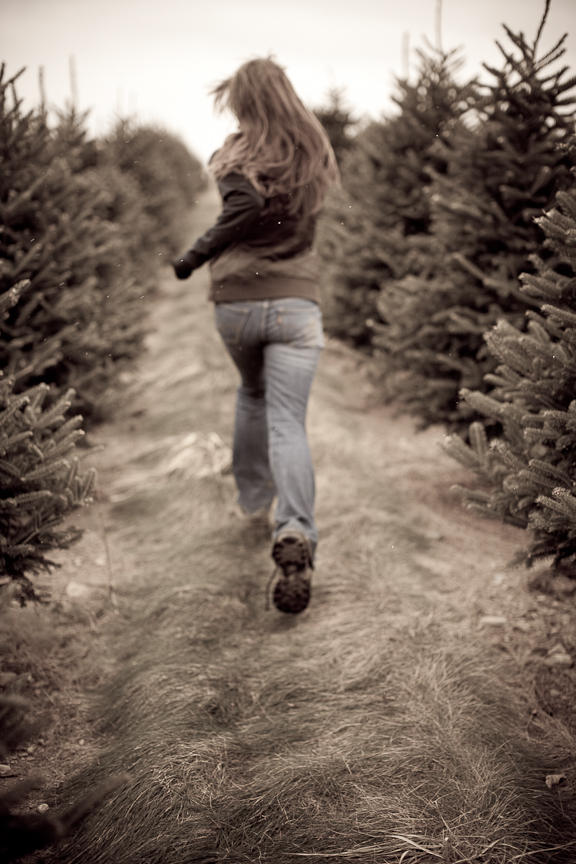 Running up and down the rows of trees was Jinelle’s “Cold Remedy.”

For now, Jinelle’s tree sits in a bucket of water in the garage, hoping for some unforseen snowstorm to come along.  We’ll see what happens!