Late morning. Hooking up in the lilypads.

As I type this post, I am really hit hard by how very quickly summer has passed.  Somehow, it has escaped me.  These photographs were made in mid-May and early June.  In just three short hours, fall will have officially arrived. 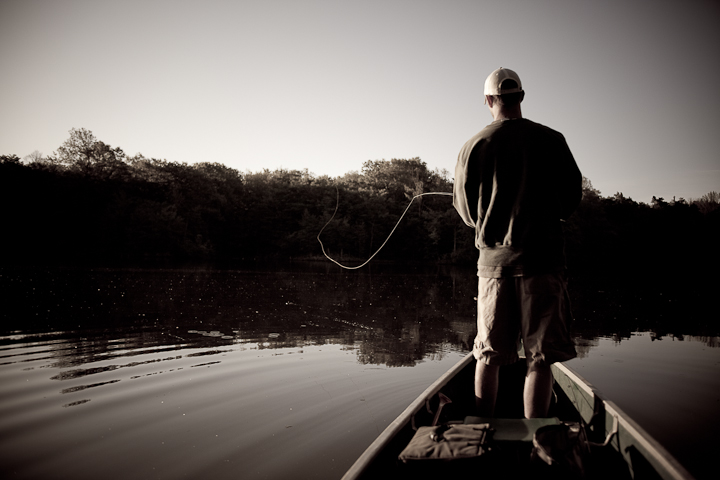 First casts of the morning.

My good friend, Matt Smythe had contacted me back in May to talk about an idea he had for an article submission to Blood Knot, an online fly-fishing magazine.  He would be writing about growing up in Upstate New York, fishing for anything that swam, a deep passion for the sport, and a reclaiming of youth.  Matt needed photographs to support his writings.  That’s where I came in. 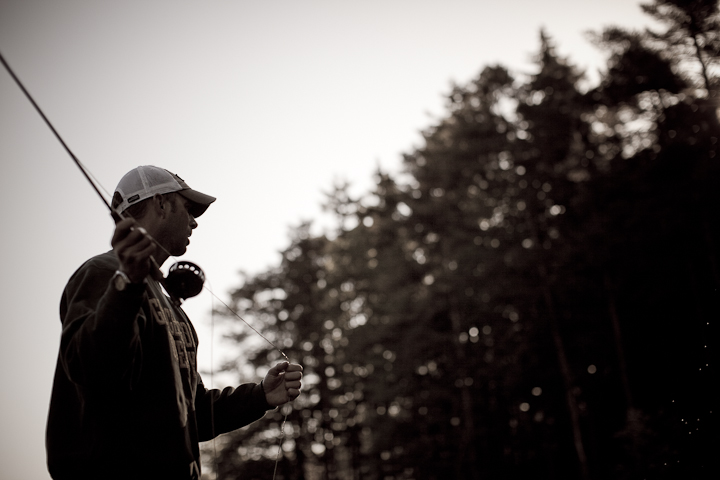 Finding fish in the sweet spots.

I picked Matt up early that first morning, May 16th.  We grabbed some coffees and egg sandwiches at the Tim Horton’s in Canandaigua, NY, and headed over to Matt’s in-laws place to pick up his canoe.  By the time we put in at the lake, the Sun was coming up.  Geese were coming off the water.  We felt a sense of urgency, I think.  At least I did.  I wanted to get some great shots while that gorgeous morning light was still with us! 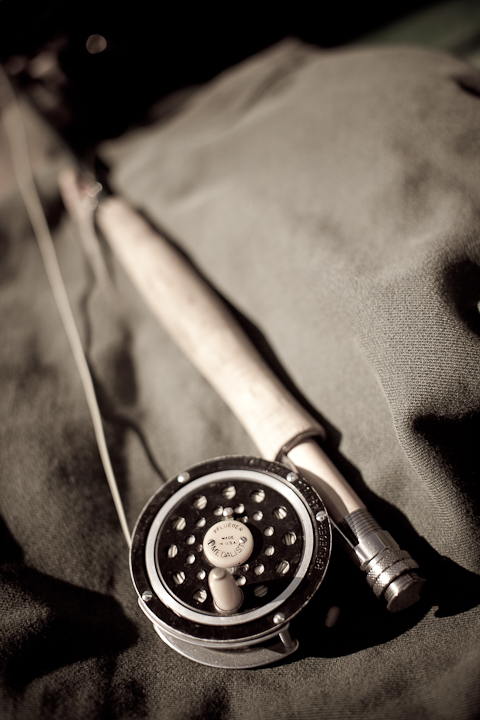 Matt’s old Pfleuger® reel would be put to the test. 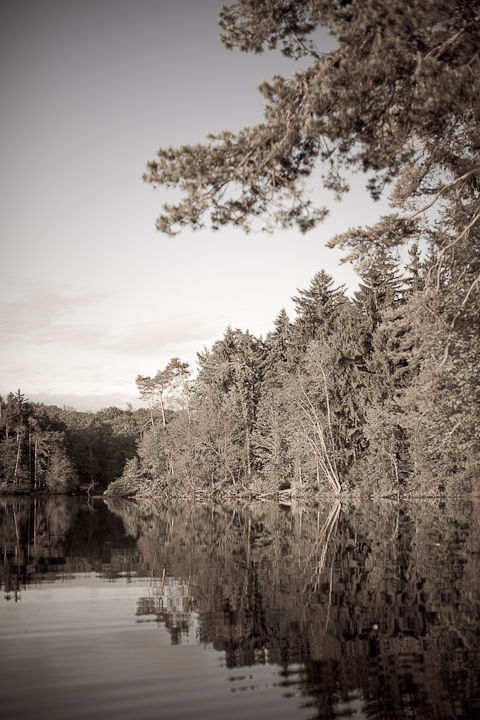 We paddled, scouted, fished, and photographed.  Matt was determined to boat some fish, and for a while, the damn things just didn’t cooperate!  Finally, we found a sweet little spot.  Matt made a couple of casts.  Nothing.  I remember saying to him at one moment, “Matt, to your right.  Inside that little pocket that’s in line with that submerged branch.”  Just one of those gut feelings. Matt cast his fly, beautifully on target, there was a stout swirl, and he came tight with his line.  And there it was.  We had a good fish!  Paddles down, fish and cameras up.  We’d make some great shots, check the histograms on the back of the camera, release the fish, shake hands, and go find another.  We found ourselves in a wonderful little cyclic, creative process.  It was very therapeutic, and it was fun.  I think we felt like we were kids again. 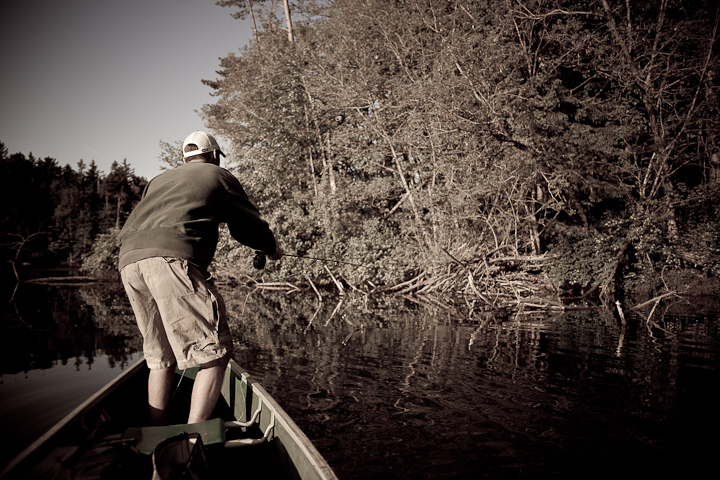 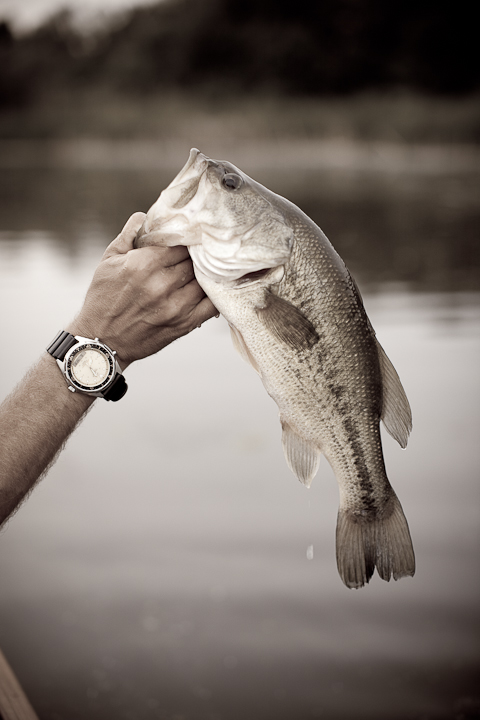 We’d had such a beautiful day on that body of water!  I don’t think I could have conjured up a more perfect Spring day.  I hated to drop Matt off that afternoon.  Didn’t want it to end just yet.  Fortunately, after editing the images and talking things over, we found ourselves wishing for more fish images, and planning another outing! 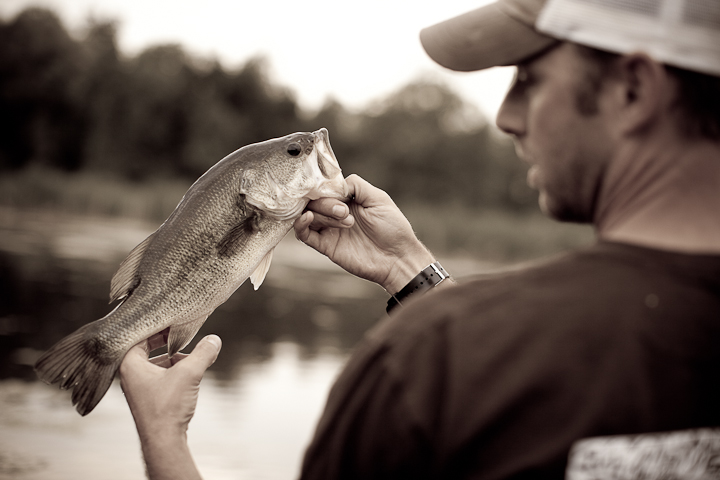 The previous Summer, I had found a great spot that I had done very well in with the Largemouths and Northern Pike.  That’s where we were headed.  Not long after we entered the wetlands creek, Matt was into some good fish!  There were some pretty solid bass to be found that evening.  It was amazing to us how in just two weeks time, the weather had dramatically transformed itself into summer.  We had even remembered, this time, to bring a little beer with us in the canoe!  This trip gave us a better opportunity to create some “fish forward” or “fish-centric” images.  I just wish that Matt could have boated that “horse” Northern Pike so we could have photographed it!  It wasn’t much under 40 inches!  We put my canoe back on top of the Tundra in the dark that evening, and since, during all the excitement, most of the beer had tipped over and spilled in the bottom of the boat, we decided to head down the road.  I was at the wheel, and Matt rode “shotgun” as he reviewed our new images on the laptop. 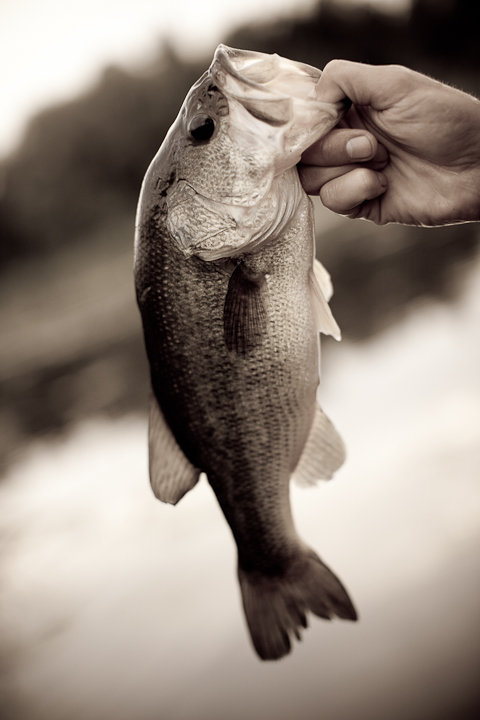 In the process of writing this evening, thinking about Matt’s article, life, and the onset of Autumn, I find myself filled with a deep sense of nostalgia.  Time, lately, has been passing far too quickly for my taste.  I yearn for those missed Summer opportunities, the talked-about fishing plans that never got made, the good buddies of years past, old Vermont waters, 18-inch native Brookies, and a far simpler time when we were all just ten years old. 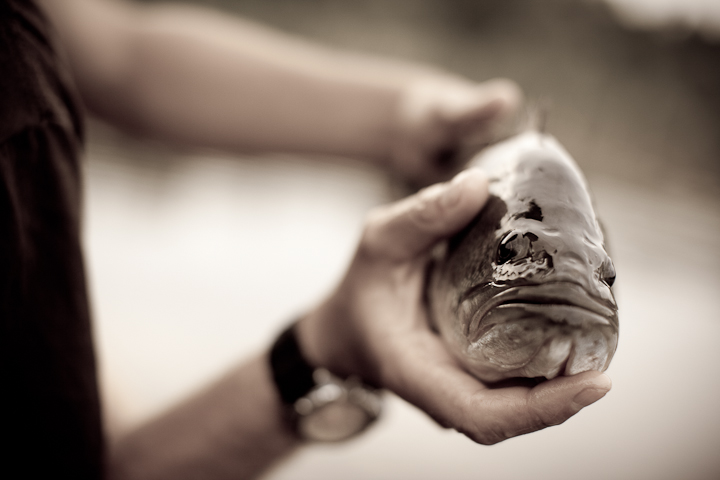 This dude was just plain mean. Look at that mug.

Matt Smythe is a writer, creative soul, and avid outdoorsman.  More of his work may be explored through his website, www.fishingpoet.com.

Monday through Friday, Matt’s days are spent among the many other creative souls at Jay Advertising in Rochester, NY.