There has always been something special to me about autumn.  The fresh energy of cooler days, the changing colors in the landscape, the subtle sense of urgency that builds with winter’s approach, and the countless days spent afield, hunting and fishing during those weeks have made me wish that the month of October was at least twice as long as it is.

This past October brought a really cool opportunity to create new imagery for a nearby manufacturer’s new line of hunting-related products that were soon to be revealed.  Crosman Corporation, of Bloomfield, NY, known for its extensive line of recreational airguns – was now about to break into the hunting crossbow marketplace with three different models of crossbows under their Center Point brand, along with some new optics offerings, and another, very unique, Benjamin-branded airgun named the Pioneer Airbow, that was developed to propel a hunting arrow, rather than a pellet. 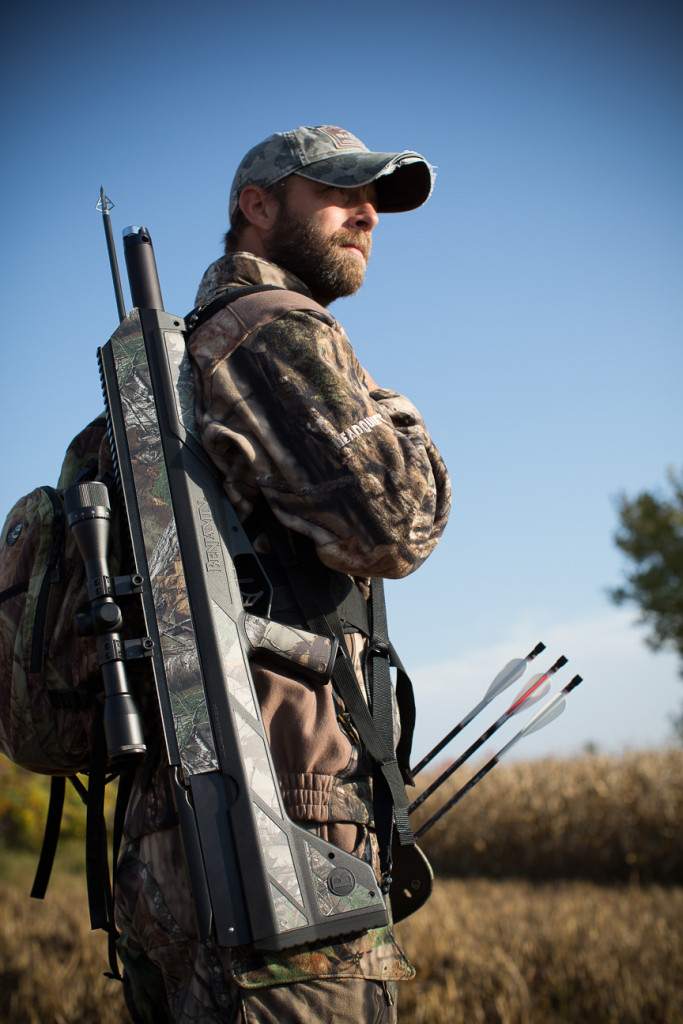 Crosman was in the midst of developing their campaign to announce and advertise these new products when they had first reached out to me, and through the course of a couple meetings, we planned for a mid-October photo-shoot that would meet their need to create an image library encompassing all of the new products, for use in printed catalog, the Crosman web site, social media platforms, and trade-show displays.

A great deal of preparation needed to take place before any photography could, and we had some time on the calendar to make that all happen fairly comfortably, while we also waited for those classic October days.  People were wrangled for the upcoming shoot, locations were scouted, tree stands were hung, hunting clothing was gathered, product was allocated and set up, and all the other little details were attended to.  Knowing that we had a great deal of imagery to create for numerous products in different situations, I had decided to try and keep our locations in close proximity to each other, so that we had all the different scenery we needed, and didn’t have to spend too much time traveling in-between each site. 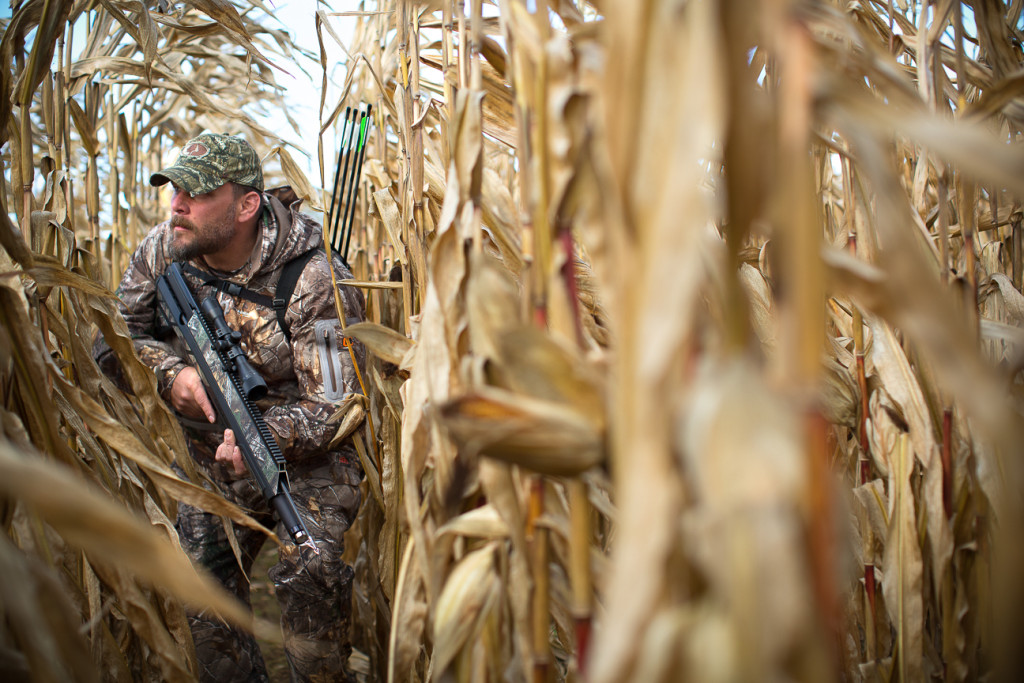 On our property alone, I had hung several tree stands, strictly for the photo-shoot, and also had access to a couple neighboring farms that offered up just what we needed to create the scenarios on our to-do list.  Everything was in place.  Now, we just needed some favorable weather and good light.  We’d planned on a day-and-a-half of shooting, and wanted to accomplish as much as we could during that time.  A bit of a schedule had been developed, with some flexibility added in, but the real approach was to simply begin at the top of our list, make some gorgeous photographs with the first of the products, and just keep on truckin’. 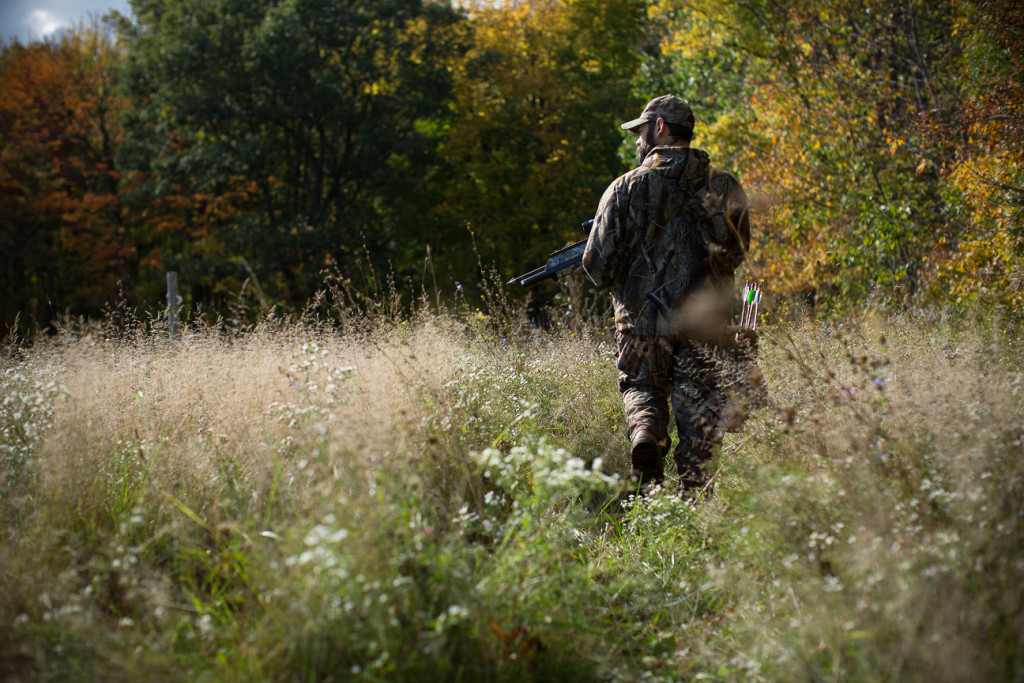 The day prior to the photo-shoot, I felt really good about the way things had fallen into place.  I had hung some tree stands specifically for use with morning light, and others for end-of-day light.  During scouting, I had decided when the light direction would be best in the different crop fields and wooded areas, and had decided to kick things off at sunup the next morning in a gorgeous-looking soybean field at our closest neighbor’s place.  That night, wanting to go to bed at a decent hour to get rested up, I let the dog out the back door about 10:00 to let her do her thing before shutting things down for the night.  I walked out onto the back deck as Sienna squatted out there in the dark.  The not-too-distant sound of heavy farm machinery filled the air.  Pretty common this time of year out here – everyone’s trying to get their crops off when the moisture levels are right, and before any foul weather comes in.  I could see the lights of a combine moving along through the trees.  Wait a minute.  What?  They were cutting the beanfield I had planned to use in the morning!  NOOOO!  My heart sank for a minute, but then I remembered another, larger field of beans farther down the road that was planted on wider rows and had taller plants.  No problem.  Didn’t really NEED those beans anyhow.  They were just going to look pretty in the photographs.  (It wouldn’t be until later the following afternoon that we’d find the second beanfield had also been cut that same night!)  GAH!

Everyone showed up on time the next morning, and we got right to work after having a little coffee.  We loaded up the trucks and ran down the road to the second farm and headed out to some fields to begin our day.  We had nice light in the morning, and it really turned into a gorgeous October day.  By 9:30 or so, I had shucked off my hoodie and was just in a t-shirt.  It was that warm.  Some rain was coming in, though, and within a couple of hours, the sky began to darken.  Dramatically.  Shifting gears quickly, we ran back up the road and entered some different crop fields that were arranged on a hilltop to take advantage of that dark western sky, and the sunlight that still shone from the east.  Once the rain finally hit, we broke for an early lunch back at the house, and got right back to work when the weather had passed. 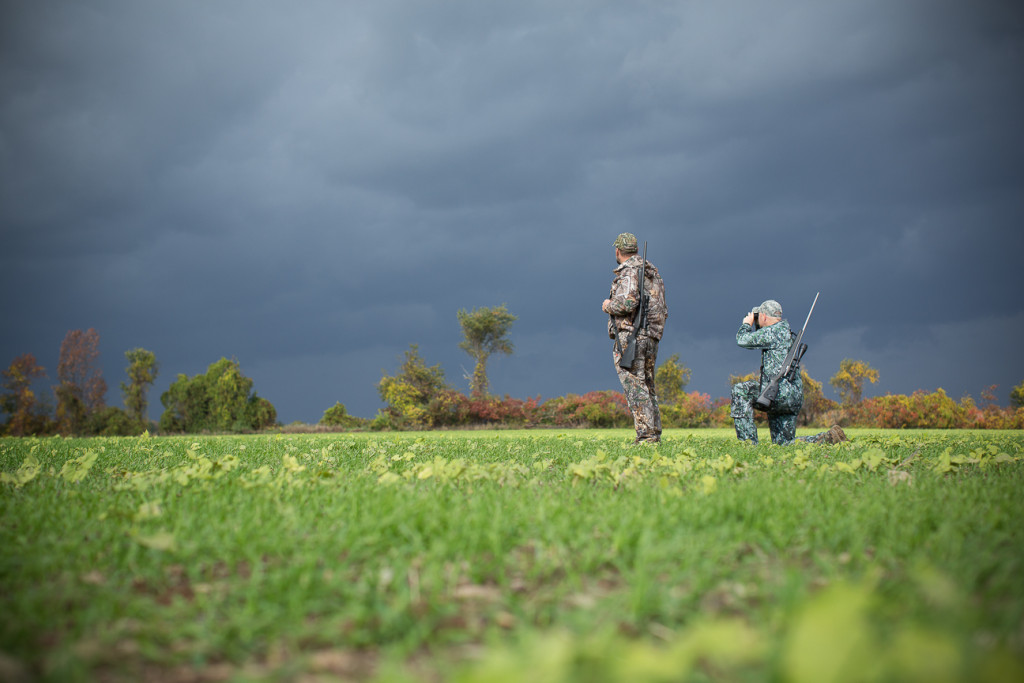 During the course of a day-and-a-half (plus a little,) photo-shoot, we accomplished capturing thirty different scenarios with different combinations of people and equipment.  Intermittent overcast skies during both days robbed us of some of the more dramatic lighting I had hoped for each evening, but was still very workable, and still resulted in a really nice body of photography.  In all, just over 6000 images were captured, and I narrowed it all down to the top hundred or so the following day.  The client made their selections, around 50 images, and I spent time with each of those, giving them the usual “hands-on love” to tweak the tone and color, and take care of any retouching items that were necessary. 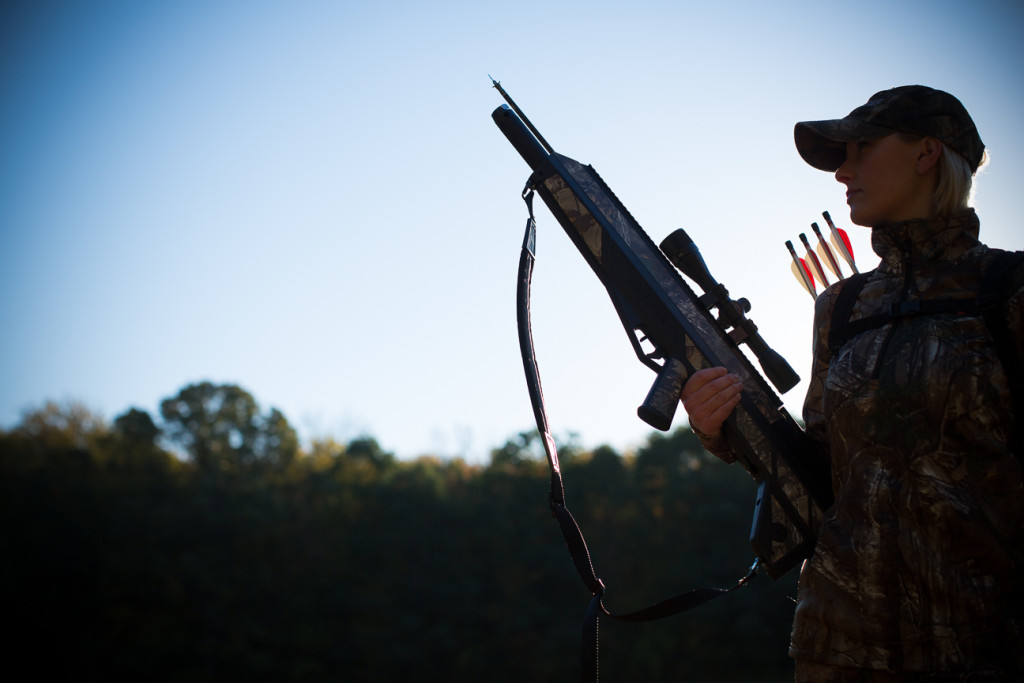 Many of the crossbow-related images, depicting the Center Point Tormentor, Sniper and XR175 crossbow models, were put into immediate use on the Crosman web site, as those products were becoming available for order very soon after our photo-shoot.  Imagery of the Benjamin Airbow would not be revealed to the public until the product was launched at the ATA (Archery Trade Association) Show, held in Louisville, Kentucky, from January 5 – 7.  I had received a few of the 2016 Crosman catalogs in the mail, and through images posted on social media channels, I was also able to see some of the imagery from our shoot used in large-format trade-show displays in the Crosman booth at the ATA show.  I always get a kick from seeing the various ways that my photographs are used for different purposes.  During this particular project, maybe a little more so than usual, I had to keep in mind the different formats the folks at Crosman had in mind for final reproduction, and had to try and create compositions that allowed for flexibility among those formats, also anticipating the right amount of negative-space for any headlines or copy would be introduced. 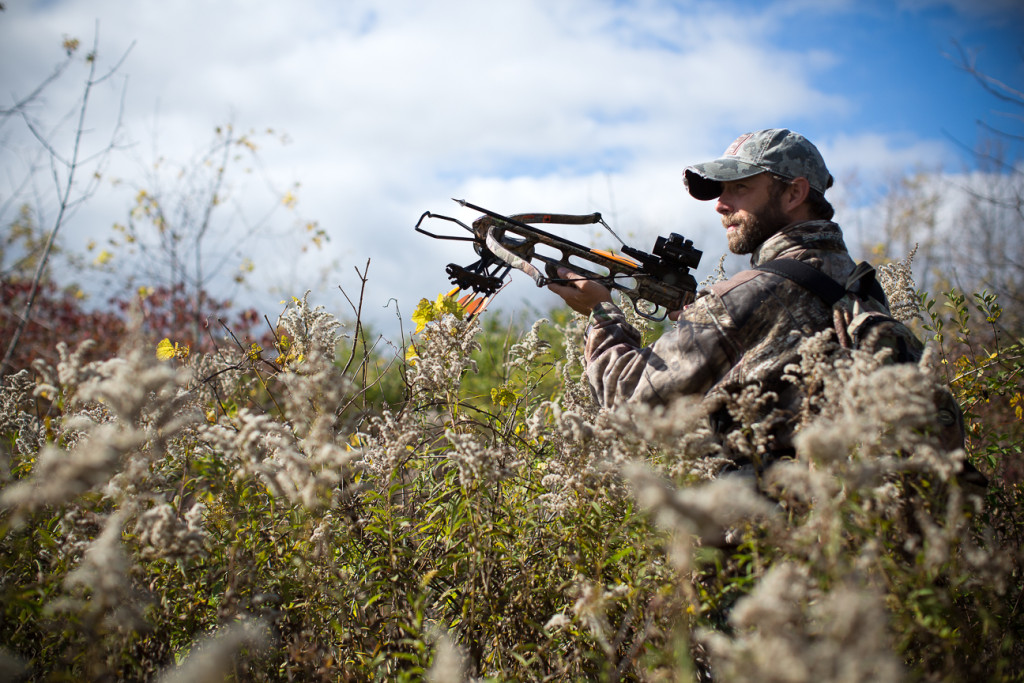 The days of October are behind us for a while, and yesterday’s change in the weather here reminded us of what time of year it really is.  We’ve been fortunate with the season so far, though, and I almost feel as though more than a month of our typical, real winter has been erased with the warmer-than-normal patterns we’ve enjoyed until now.  Having spent some time today with the images for this post has, for a few moments, helped to transport me back those days in October when the sun was on our faces, the smell of autumn was in the air, and the fields were vibrant with color.  During those moments, when I’m able to block out the cold scene outside these walls, and ignore the hum of my office heater, I can almost feel the itch of October, and I wish that for maybe just a day or two, I could rewind a couple months, discard the responsibilities, and pop out into one of my hunting stands to sit and enjoy those October woods.  My time doing that this past season was agonizingly short, and I crave for those days. 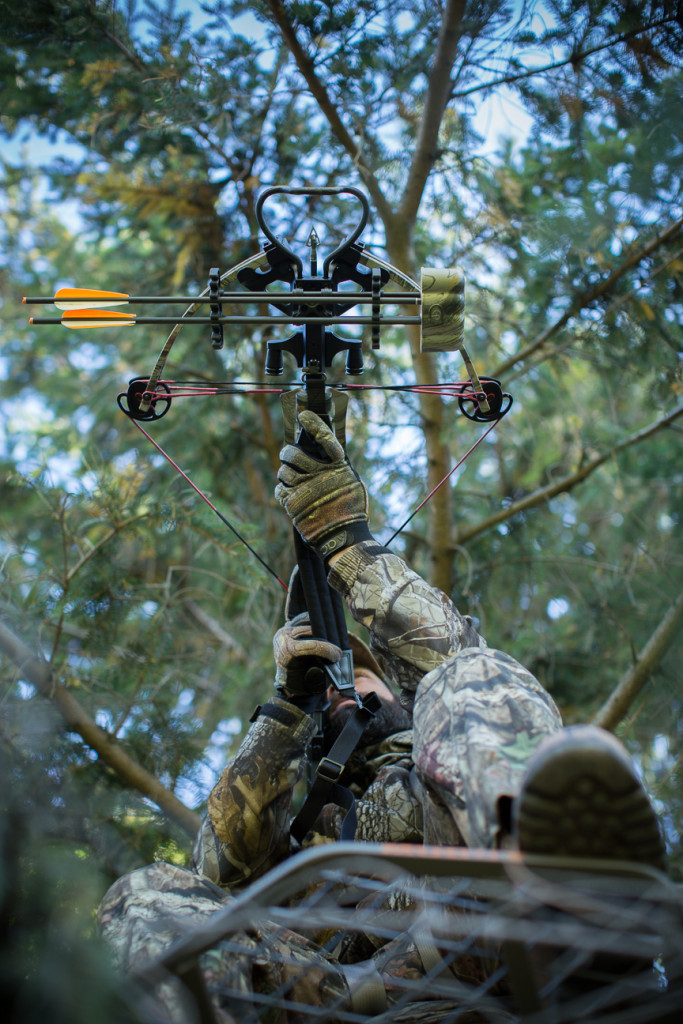