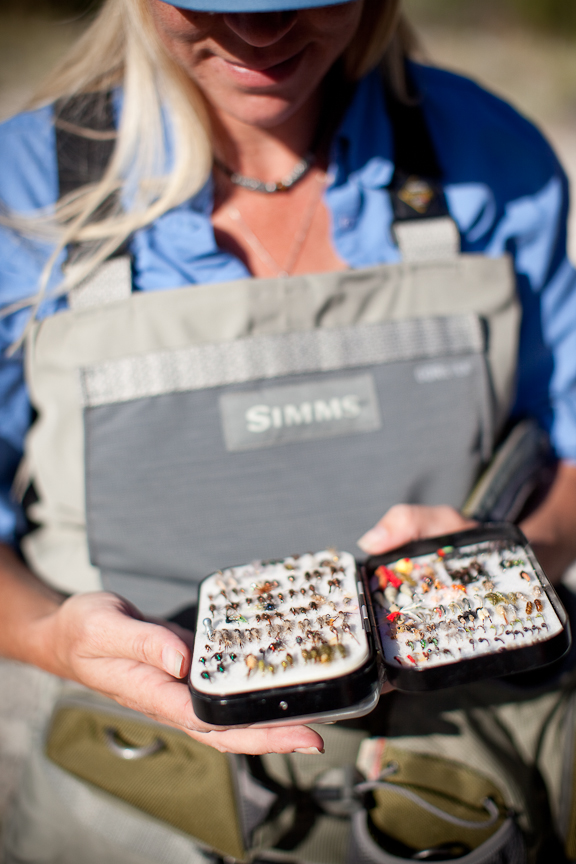 Rebecca had the most wonderfully organized fly boxes I’ve ever seen.

The morning of September 3 saw Matt and I all geared up and standing in front of the hotel in a state of bleary-eyed readiness when Rebecca pulled in to pick us up.  We were a man down today.  Our good buddy, Robert had the launch of  a client’s web site to oversee, and had left the fishing to the three of us.  So, after stopping for coffees and more ice for the cooler, Rebecca drove us west again, into Oregon and toward River X.  We were sure going to miss Robert (and his grill,) particularly when lunchtime rolled around!  Luckily for us, we’d get to see him later in the day. 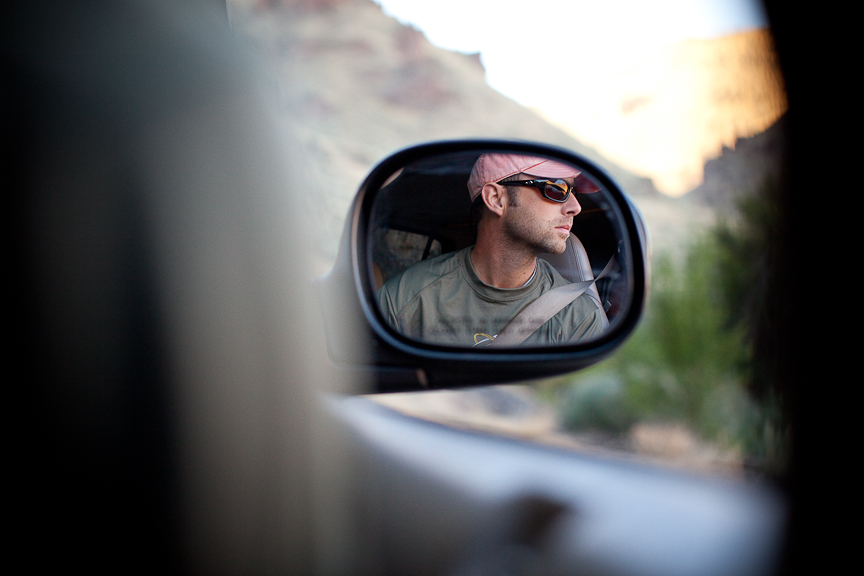 Heading into the canyon and land that is the home of River X.

After the performance of the previous day, I was feeling pretty optimistic about connecting with some more good fish.  As there often is, though, there was a bit of an internal struggle to balance my desire to fish with my need to photograph.  I usually have to allow one of the two a small victory, and so far this year, I had more images than fish to my credit.  I decided to take pictures while we were all getting ready at the truck, but then I’d stow the camera into the backpack and pick up the fly rod and see what I could do with the trout.  Today, the camera pack would come along and sit on the riverbank, just in case.  Priorities were now in order.  Sort of. 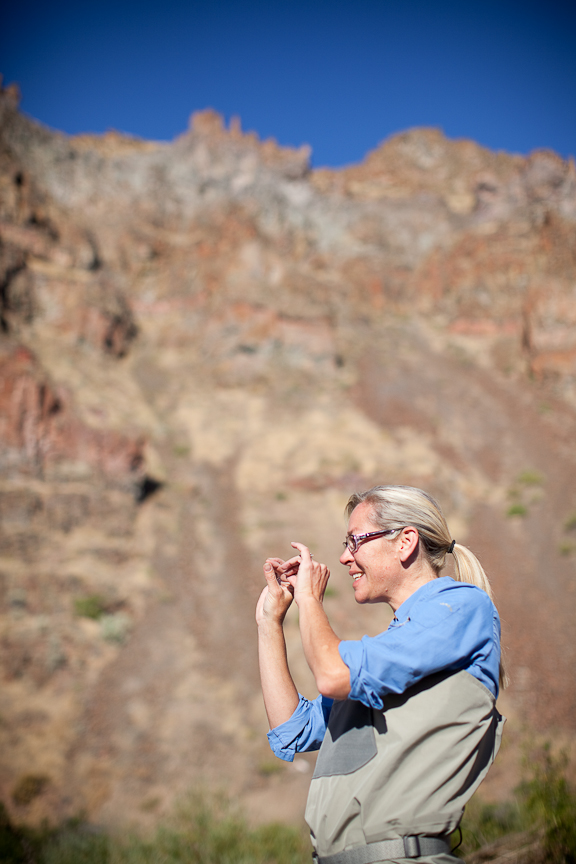 Morning lessons in the canyon.

We had planned to leave the river early that day and head back to Rebecca’s folk’s house to watch the Boise State Football game with them.  Truth be known, (and please don’t tell Rebecca I said this,) I was struggling internally a little bit with the thought of leaving such great waters to go sit on a couch and watch football.  I mean, Hell, I’m not even a football-watcher, and I sure as heck hadn’t flown across the country to sit on the sofa to chonk popcorn with Grandma!  I submitted without too much complaint, though, and rolled on with the rest of the crew.  Our fast new friend, Rebecca Garlock, was obviously being an incredible host to us, and I was pretty certain that if we were hanging out with her and her family, we’d probably enjoy ourselves just a little bit.  So, for now, we fished. 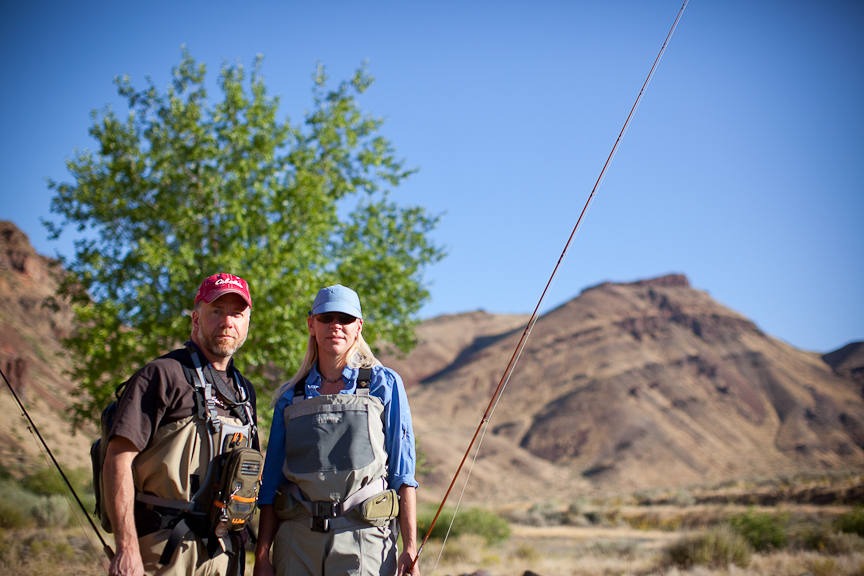 Rebecca Garlock and I, September 3, 2011.  Photograph by fishingpoet.

Because I was fishing this morning and not right next to Rebecca with the camera, I missed the chance to photograph her first fish of the day.  The morning seemed a little slower than the previous day had been, but we were still really excited about being on this amazing river.  Matt was downstream working on catching a trout that had been rising steadily for a while, so Rebecca and I sat on the riverbank for a bit, getting to know each other over Diet Coke, Coors Light and Snickers Fun Size.  We watched Matt change flies occasionally and continue in his pursuit of some unknown beast of a trout.  It was nice just to sit for a while and really soak it all in.  The aromatic smell of the surrounding sagebrush came to us on a perfect breeze, the sun felt great, the river and canyon were just gorgeous, and we were only on the second day of fishing.  Rebecca and I laughed together, popped another Snickers, and watched Matt some more.

Rebecca and Matt during the morning portrait session. “Can we fish now?”

Then, Matt hooked up.  I grabbed the camera and pack, and followed Rebecca through the rocky riverbed downstream toward Matt and his arcing fly rod.  We could tell it was a good fish.  I was excited to get there with the camera, but choosing my steps really, really carefully so I wouldn’t go down.  Rebecca got there just ahead of me and positioned herself to grab the fish when Matt could swing it toward her.  The trout flashed, all golden and beautiful in the water.  Nice fish, too.  All of 23 inches, easily, and stout.  Really pretty fish.  And then, he was gone.  As expertly as Rebecca had got her hands on him, though, he just spit the fly, and flopped free.  I had only been able to rattle off a few quick frames of him as he abruptly scooted to resume his search for bugs. 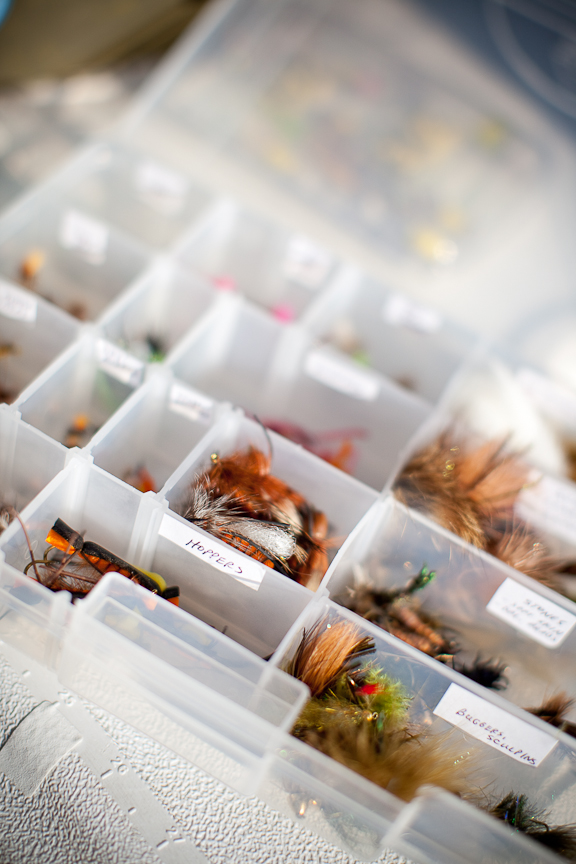 We all took a break and visited some more, then decided to fish a little farther upstream.  I took the farthest upstream point with Rebecca below me.  Matt was around a bend in the river, and I couldn’t see him any longer.  I sat for a bit, and watched for rises.  After a short spell, I had located four rising fish.  One was directly across the river from me, underneath some overhanging willow branches.  The others were a little farther away, so I figured I’d give this one a shot first.  I tied on a size 14 or-so winged-ant pattern, knowing that many of these willows were laden with similarly sized black ants.  My target fish took the ant after just a few presentations, stayed there long enough to bend the rod for a few moments, and then was gone. 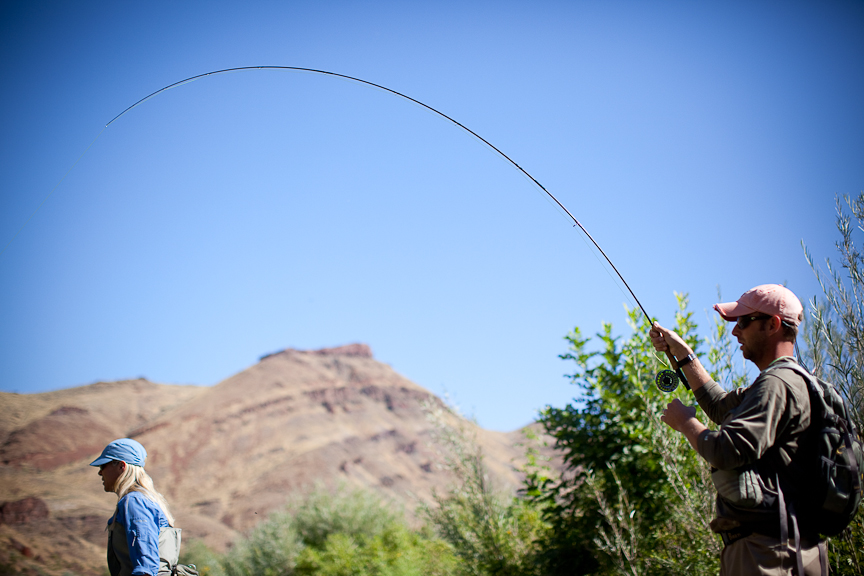 Matt with a good brown on. We didn’t quite get to photograph this one.

Pretty much the same deal with the others.  The fish, I mean.  I couldn’t seem to hook one today, no matter what I tried.  Rebecca hooked two good ones, but again, they came off.  She would later lay the blame on a faulty hook, though, for it had no point!  We decided to head back to the truck and drive up the road to where we had fished the day before, to The Land of Lunker Browns.  From high up on the bank, the three of us stood and located a BUNCH of good fish, rising with regularity to sip flies off the water’s surface. 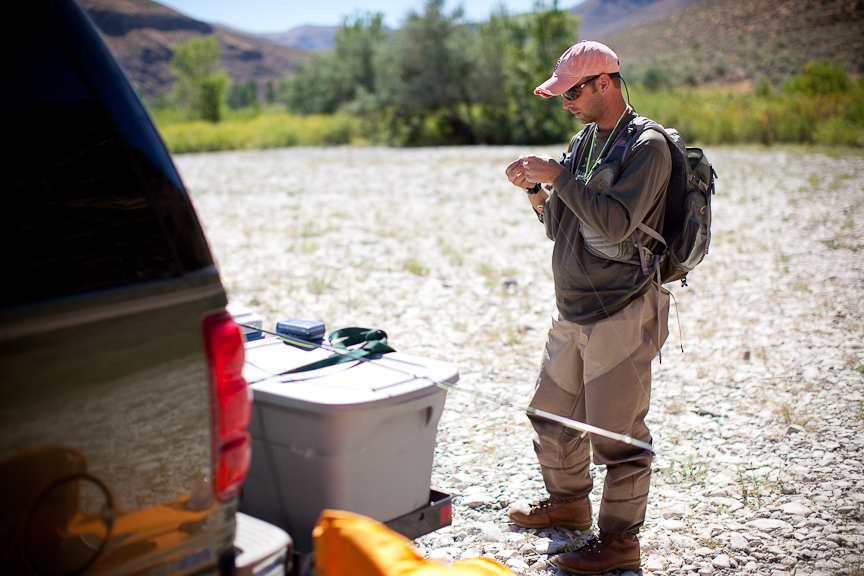 Matt made his plan of attack, choosing a spot that should put him within reach of a few fish.  I headed upstream to the area where I had caught mine the previous day.  I worked at it for a while, but in the end wasn’t able to bring any fish to the net.  I was enjoying listening to Rebecca’s direction and banter with Matt as she watched over him from her high perspective and told him where the fish were, relative to his position.  It almost sounded like a game of Battleship.  Well, curiosity and loneliness finally won over, and I clambered uphill over the boulders and ants to join Rebecca with a couple of cold drinks from the cooler and a folding chair.  Then, I started chiming in.  To help Matt, of course.  “Matt,”  I’d start, “There’s a Toad about twelve feet upstream from you, just on the other side of that submerged rock.  Wait, here he comes.  (Sip-slurp.)  There!  See him?”  “He’s got to be at least 26 inches.”  It went on like that for a while.  I was waiting for Matt to throw something at me, but he never did.  At one point, I’ll bet there were easily a dozen SERIOUS browns within reach of Matt’s cast.  Unfortunately, these fellas were being ultra-selective, and were stone-cold focused on whatever they were gleaning off the surface of the water.  I never did actually see what they were taking.  It sure as heck wasn’t anything that Matt was dishing out. 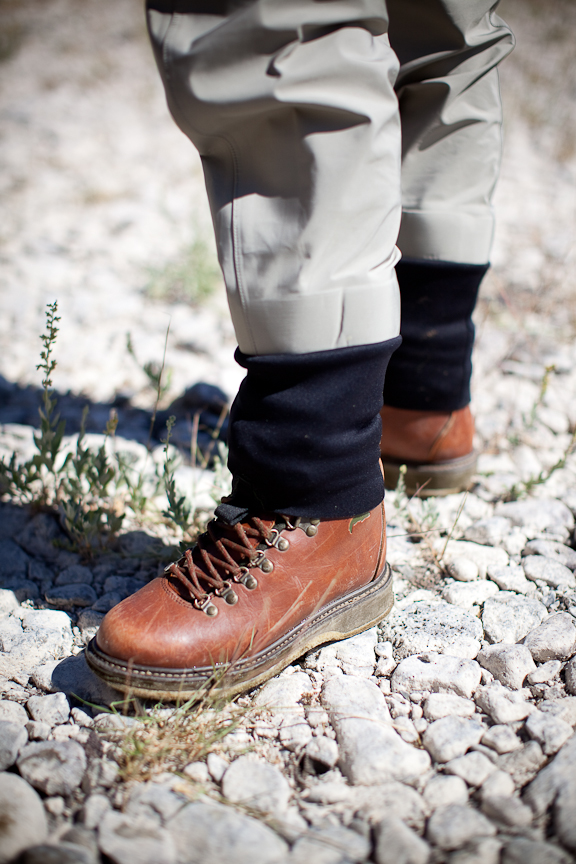 I suppose the hands of the clock were what really got Matt out of the river at that moment.  We had to get headed back to Idaho in time to watch the football game with Rebecca’s folks.  Had it not been for that distraction, we might have sat there until dark “helping” Matt in any way we could have.  I can remember feeling a bit empty inside when I saw the last little bit of River X out the rear-passenger side window of the truck.  I had hoped Matt and I could get out on that water again before we flew back East, but a busy schedule on other rivers would win over, and we’d have to back-burner that idea for our next trip.  Besides, we still had five more days of fishing to do and four more rivers to see. 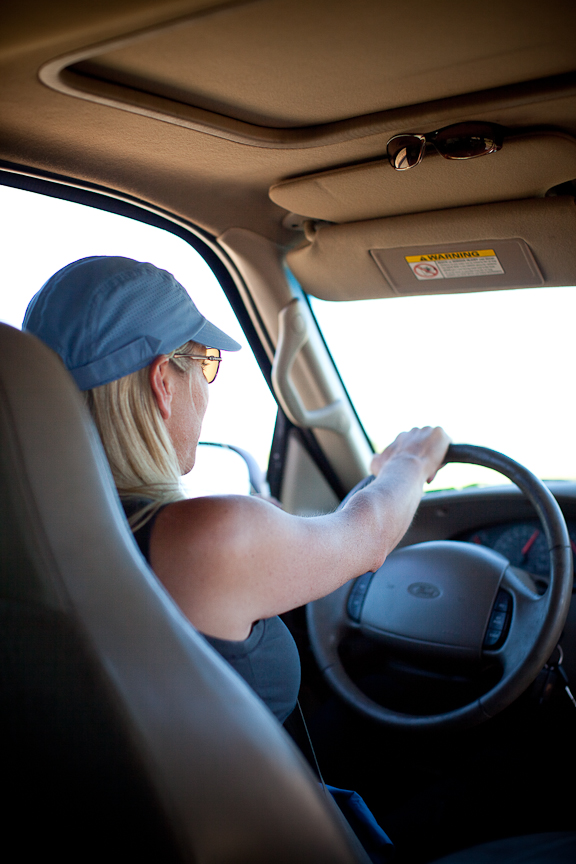 Heading home for the football game. Boise State would win. 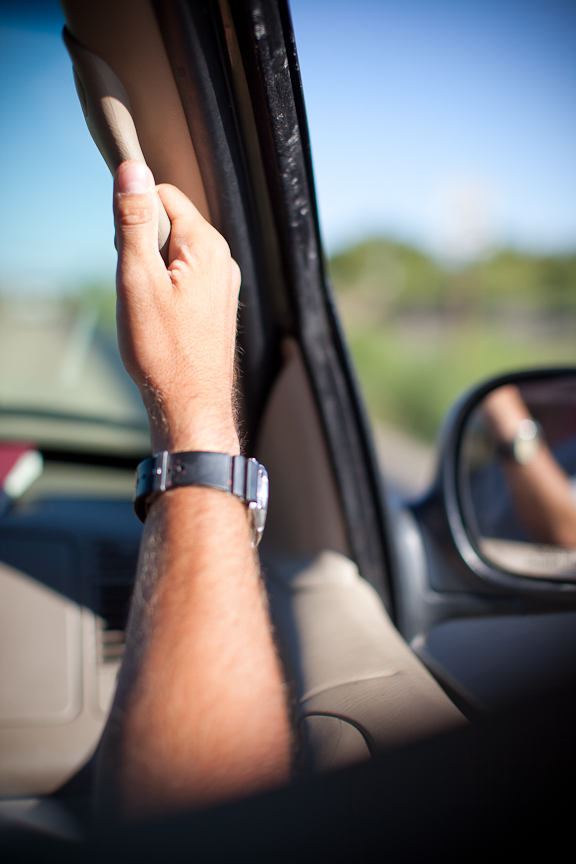 Robert Nelson Aka (The Flamboyant Fisherman)

Grant,
What does a man say about pics…they are worth 1000 words. Thanks again for taking the time to write up, we so loved having you and Matt out with us for a few days and cannot wait to do it again.
-Tight Lines and Fast Shutters-