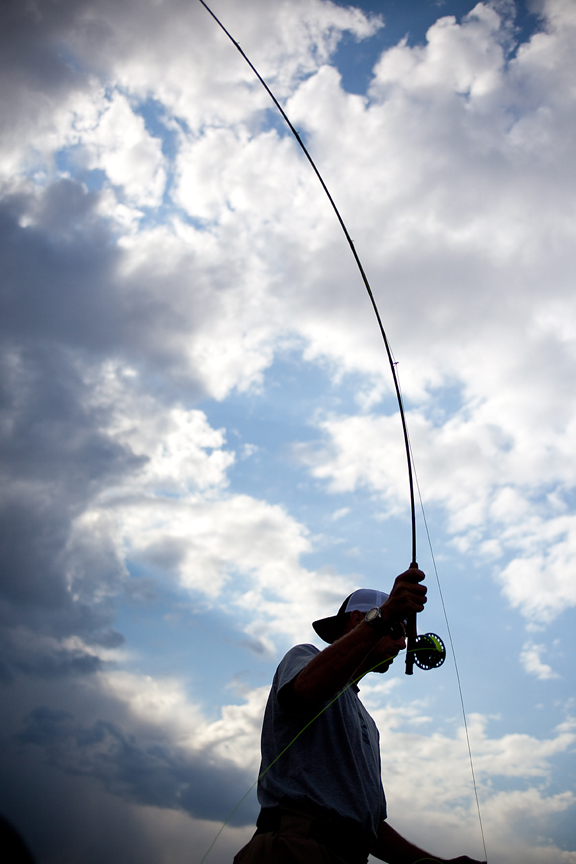 Matt, in the bow of the boat, chucking a Sex Dungeon to likely spots along an undercut bank during a drift.

Neither Matt nor I were moving very quickly this morning.  It actually felt pretty nice not to have to be geared-up before sunrise, hustling out of the hotel with camera bags and peanut-butter toast.  We enjoyed a leisurely breakfast, got the room all squared away, loaded the Highlander and checked out of the hotel.  Our drive to Idaho Falls would take about four hours.  On the other end of it, we’d be meeting up with Colby Hackbarth of Kast Gear, and fishing with him on the South Fork of the Snake River. 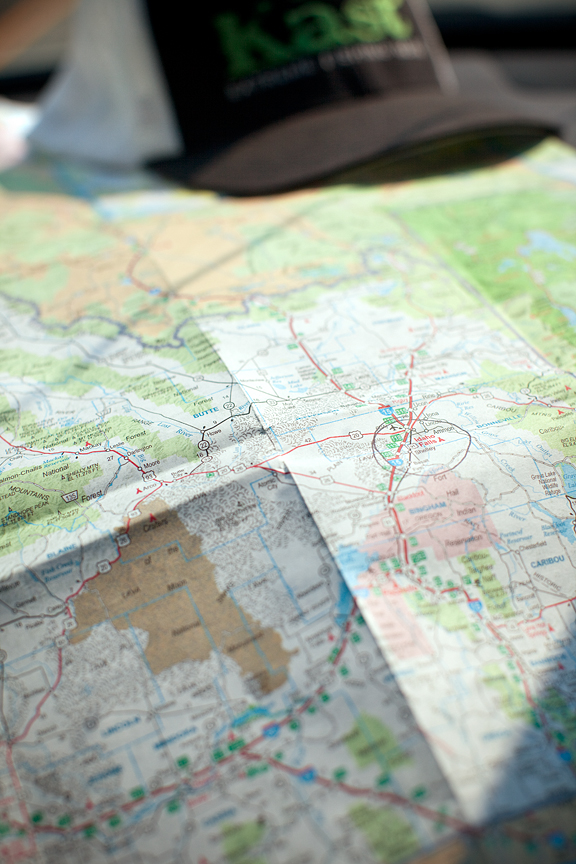 The road to The Snake.

Matt was at the wheel as I was editing images on the laptop and running the iPod playlists on the car stereo.  Johnny Cash, Soundgarden, Ryan Bingham, Led Zeppelin, Grace Potter and The Nocturnals, Townes Van Zandt, Reckless Kelly, Beastie Boys, Alice in Chains, Chamberlin, Alison Krauss.  Oh, and Iron Maiden.  We passed through the lava fields and on up to Idaho Falls.  If you ever find yourself traveling this stretch of highway, be sure to pull in to the truck stop at the exit for Eden.  It has all the regular truck-stop stuff, but also boasts a “Garden of Eden” themed sit-down café, complete with a giant, red-eyed snake.  The bathrooms were pretty clean, too, as I recall. 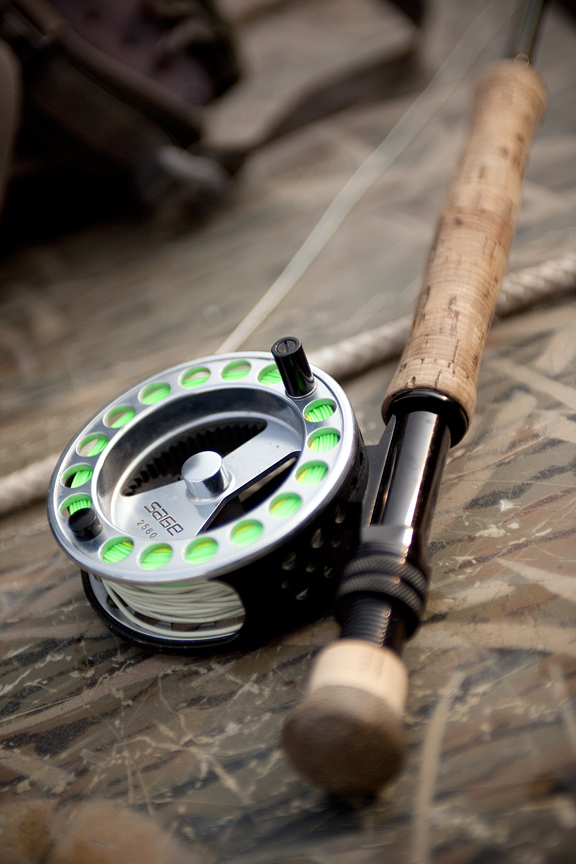 Colby’s 8-weight rig that I would later use to hook my “freight-train” brown.

Once we had checked in to our new digs, Matt raised Colby on the phone and arranged to meet up with him in a church parking lot about 20 minutes away.  We found the place eventually, exchanged handshakes and introductions with Colby, shot the bull for a few minutes, and transferred our necessary gear into his truck for the ride to The Snake.  Colby had so very graciously offered to take us out on the river in his jet-boat, and we were not the sort of guys to turn an offer like that down.  While most of the other folks fishing the river would be floating along with the current in drift-boats, Colby’s rig would allow us to cover more water with far greater ease, and to re-fish hot stretches that we had drifted through just minutes before. 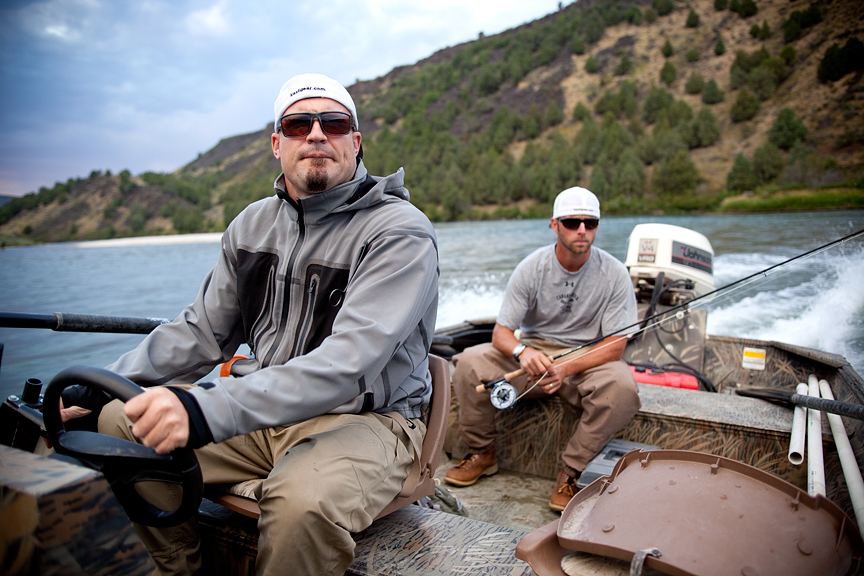 Jetting back upriver to find some new water.

On the way up the road, we stopped at South Fork Outfitters to gather a selection of flies that were the “hot tickets” for this river.  Sex Dungeons.  We found them in brown, olive, black and white color variations.  Gorgeous, fat, drive-the-trout-crazy flies filled the sectioned drawer that the shop attendant had set on the counter for us.  Somebody had been busy at their fly-tying vise.  Matt also found himself a cool Simms camo hoodie that, as far as I know has been on him (or his daughter, Aleida,) every day since we got back east. 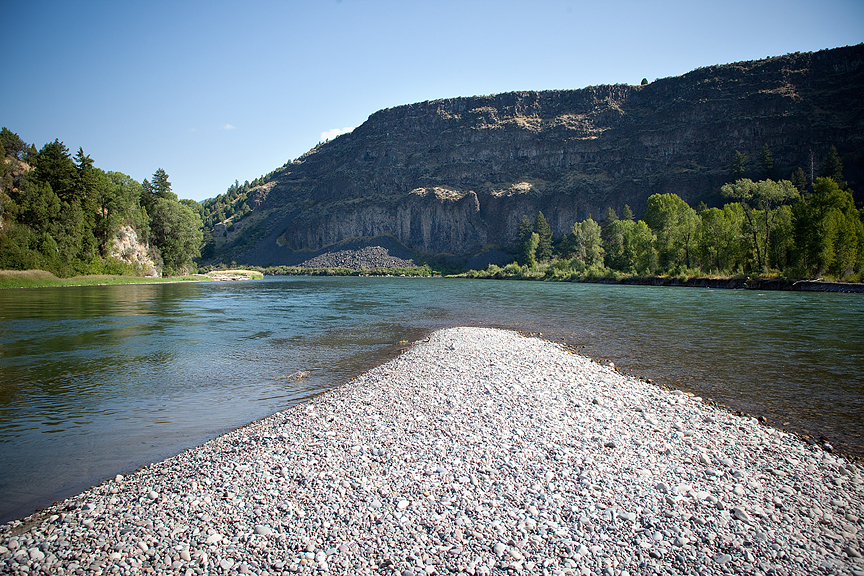 Countless gravel bars on the South Fork offered great opportunities to beach the boat and wade some really gorgeous stretches of water.

At the boat launch, Colby filled out the necessary paperwork while Matt and I transferred gear into the boat and got into our waders and boots.  Once the boat was in the water, Colby took us downstream to give us the lay of the land and find a good spot to start fishing.  From the very beginning, I was really impressed by Colby’s knowledge of these waters and his relaxed prowess as he navigated around boulders and challenging currents.  Occasionally, he’d pull the boat onto a gravel bar and have Matt cast flies along a good looking run.  If there was no action within a short period, we’d move on.  It wasn’t too awfully long before Matt had his first fish. 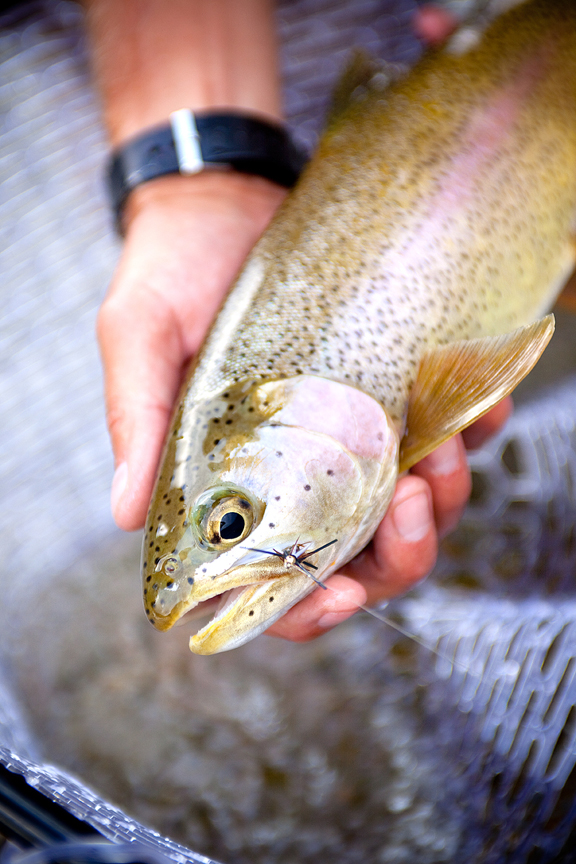 Thunderstorms were threatening in the skies to our South, but they never came close enough to be of any real concern.  We just kept fishing as the afternoon wore on.  I was keeping pretty busy with the camera and laptop as Matt cast and cast and cast.  Gravel bars, undercut banks, hot-looking stretches, bald eagles, and several really good fish.  Rainbows, browns, cutthroats and cutty-rainbow hybrids.  Oh, and those stupid whitefish.  Yet, for every good fish brought to the net, there were probably something like ten strikes or slashes that weren’t capitalized on.  That made the netted fish even more rewarding.  Furthermore, they were absolutely gorgeous. 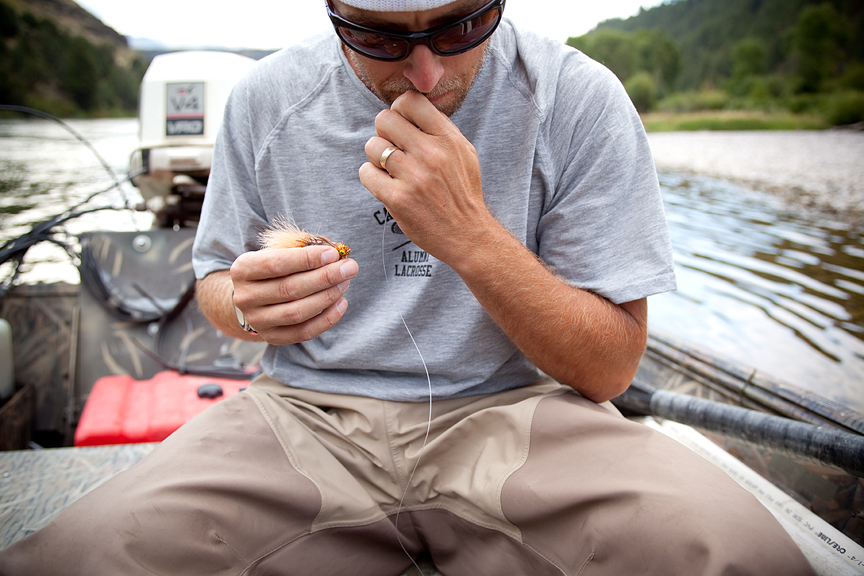 Rigging up the big stick with a Sex Dungeon and preparing for a drift.

Just before dark, Colby ran us upstream to show us a pretty cool waterfall on one side of the river.  As the boat ran swiftly upriver, our eyes and faces had to be covered against the blast of all the caddisflies that were coming off the water.  Millions of them.  The next day would be similar in structure, but on a section of The Snake that was farther downstream.  It was this morning that I would hook a fish that will probably haunt me for the rest of my life.  It likely would have been the largest trout I’d ever caught, probably a 28″ class brown.  Only, I didn’t catch it.  Oh, I hooked it soundly, alright, and that sumbuck ran hard upstream for Montana, putting a gorgeous bend in the 8-weight rod that I had borrowed from Colby.  My “moment of greatness” lasted all of ten seconds.  The fish decided he’d had enough of that nonsense, and broke off in the rocks.  Gone.  Deflated.  Humbled.  God, I love Idaho. 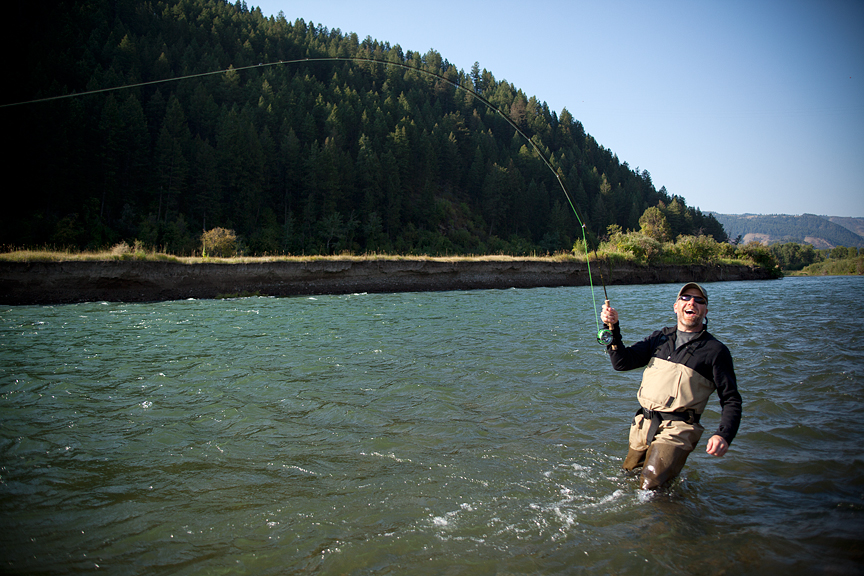 The last, and happiest, image in a short sequence that Matt captured just before the “unbuttoning.”

We had a really great second day.  The fishing was quite good, I was pretty excited with the photography I was getting, and the setting was stunning.  We were in a dream-world.  Gorgeous land, perfect weather, and fantastic people surrounded us.  Oh, and the fish!  I fished more today than I had on the previous one, but never did bring one to the net.  I was enjoying photographing Matt’s successes, and all of the goings-on, and that was alright.  For years, I’ve been torn by the sacrifices made when laying the fly rod down for the camera, but somehow, on this trip, I had come to terms with it a bit more than usual.  Perhaps the photography aspect has become more important to me as time has gone by.  Great successes can also come when the camera is in-hand.  Still, it felt awfully good to have a handful of cork and a solid fish on the other end.  Some days, though, it’s still a painful struggle. 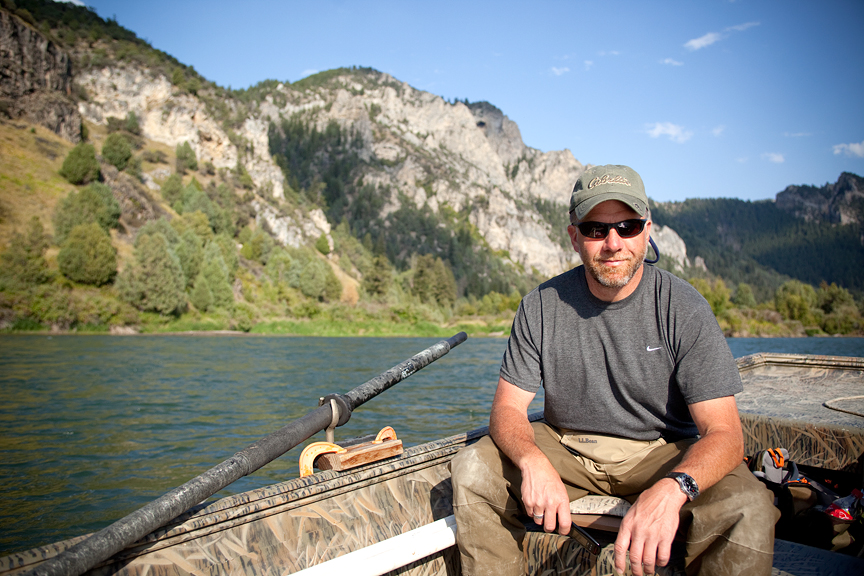 Relishing every moment and stowing it all away for vivid recall during the long months of winter.

This river offered so many opportunities for different styles of fishing.  I said to Matt at one point that Colby seemed to have a nearly “tactical” approach to his methods.  Not overly aggressive, but decisive and purposeful.  Well thought-out.  Always moving, seeking good-looking water, deciding how to fish it, getting it done, and if it didn’t produce, you moved on to the next thing.  This approach surely comes from years and years of experience.  Colby has fished these waters since he was just 8 years old.  We waded and fished gravel bars, we drifted and cast into sweet runs and undercut banks, but not once during those two days did we stop moving.  Not once.  Colby’s camouflage boat and its 90-horse Johnson seemed to add a poetic attitude to the whole tactical approach, and was far removed in style from the relatively graceful Hyde and ClackaCraft drift boats that navigated their own ways downstream.  It allowed us to get to where we needed to be.  It got us there swiftly and surely, and with just the right amount of attitude. 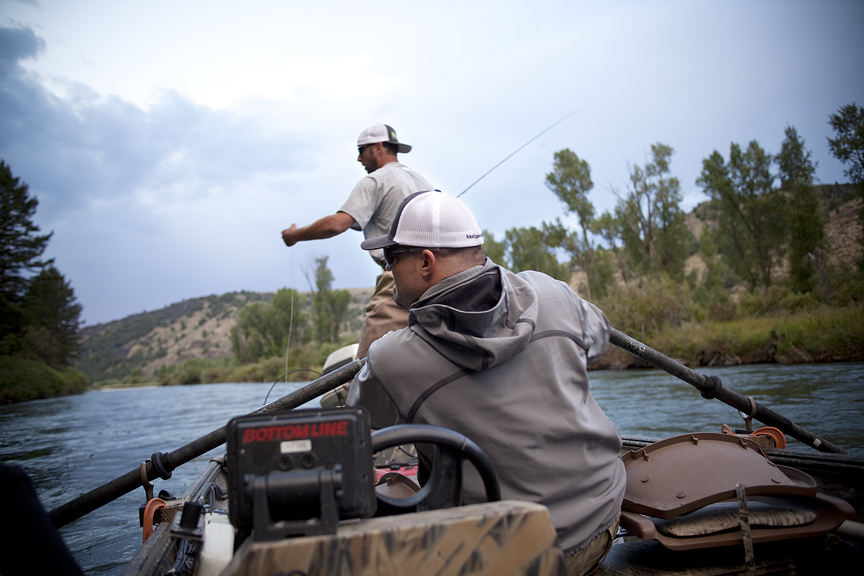 Rapidly switching tactics. Matt, whopping Sex Dungeons at the riverbank while Colby controls the boat during a fast drift.

I hated to see these days with Colby end.  We were just starting to get in a really solid groove.  Over the past week, Matt and I had begun to establish a routine.  A lifestyle.  On this trip, each segment had been quite different from the one before.  Different in landscape, fish species, energy, fishing style, attitude, technique, and feel.  We were getting close to the end now, and in many ways, both of us hated to see it coming.  Matt was looking forward to seeing his wife and kids back home, surely, but I was really kinda wishing for another month or so out here.  There must be some way.  For now, for a couple more days, we would continue to live in this wonderful dream-world and soak up as much of it as we possibly could. 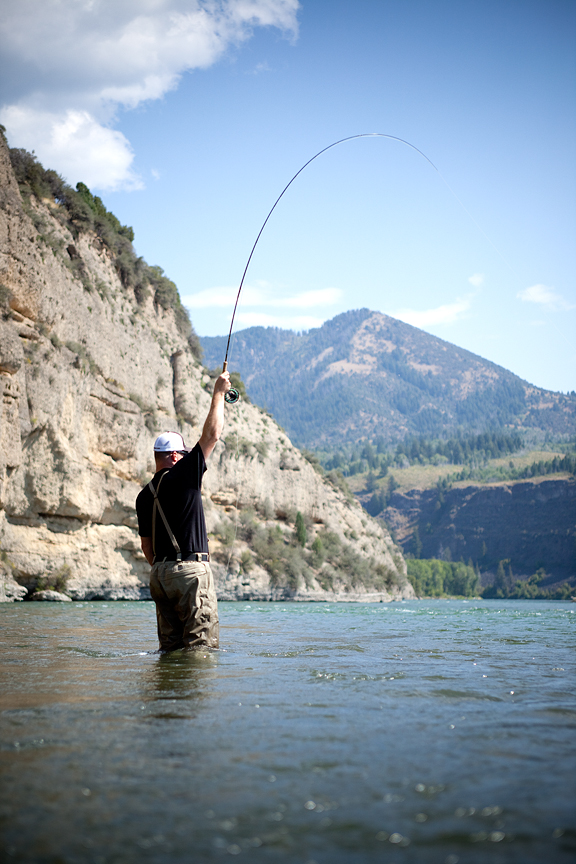 Colby hooking a really pretty Cutthroat along the canyon walls. 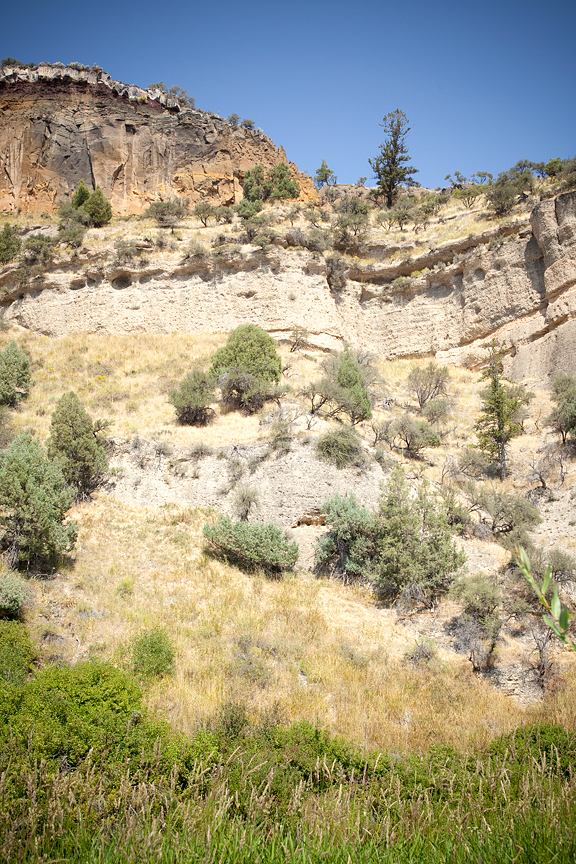 Canyon walls that describe the type of terrain we were encompassed by during our second afternoon on the South Fork of The Snake. 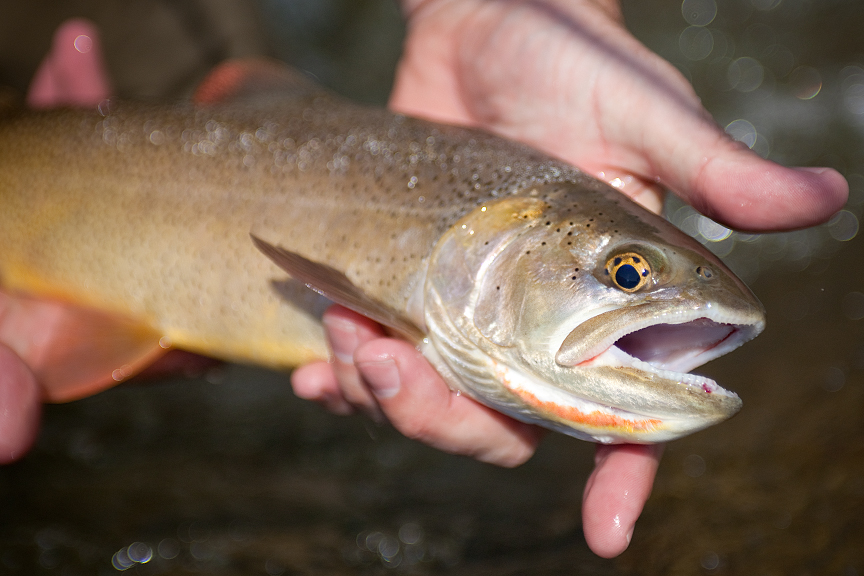 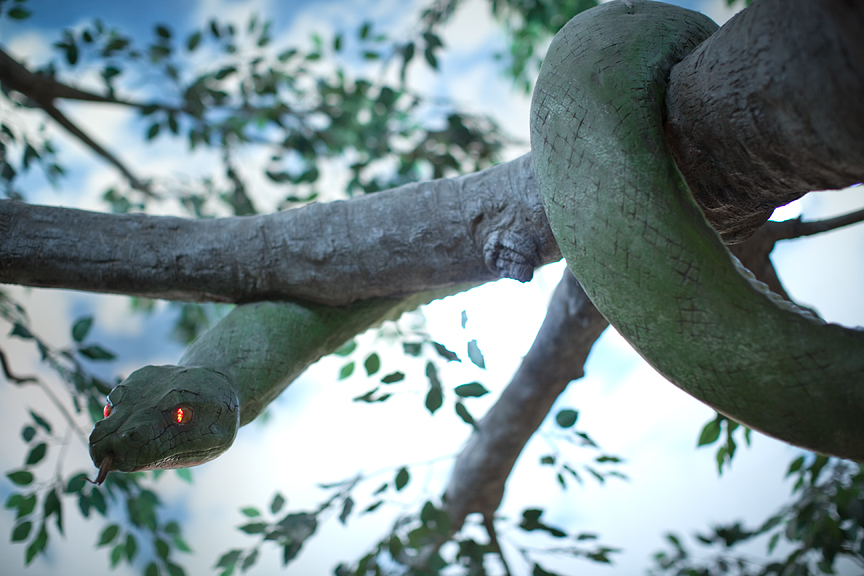 The snake at the truckstop café in Eden, Idaho. Ultra-cool. So help me, he had red eyes.