The Chamberlin Interview at WBER 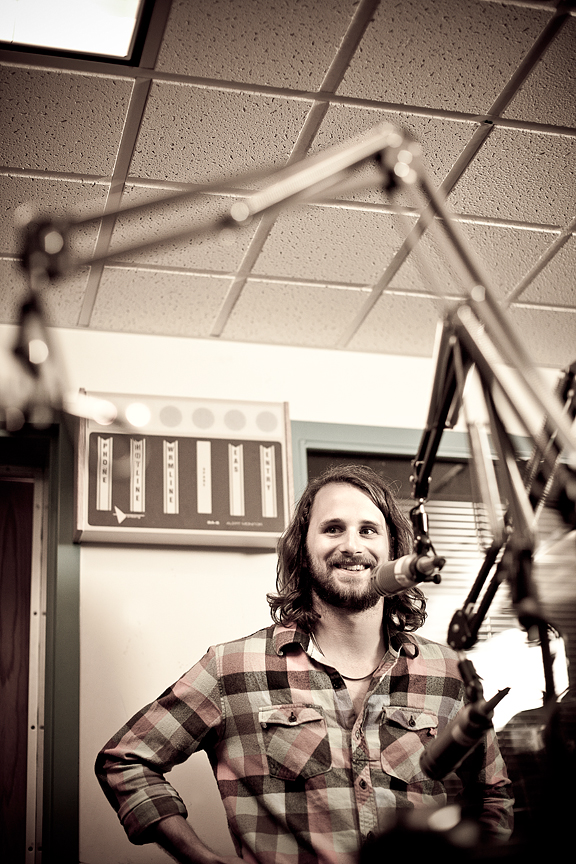 Mark Daly, Chamberlin’s front man, at ease among the cluster of microphone arms of the WBER studio.

Back in mid-September, I had the wonderful opportunity to join my good buddy, Joe Mayernik, aka “The Mayor of Nikville,” in the broadcast studios at WBER during his live interview with the Vermont-based band, Chamberlin.  I was along to photograph during the broadcast, and for me, it was one of these great little “dream-projects” that comes up every now and then when things are clicking and the stars align just-so.  It was one of those inspiring and re-energizing projects that tend to come along and give you a little “creative energy boost” right when you need it the most. 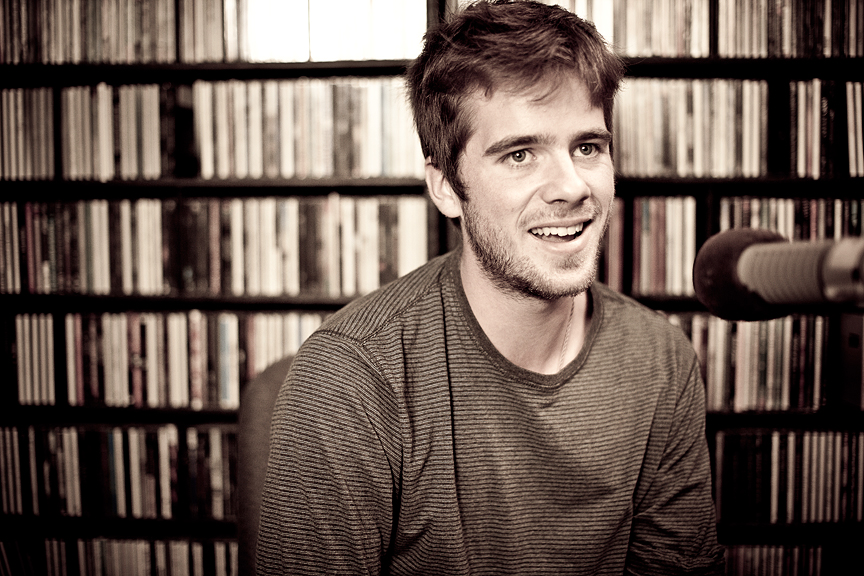 I had first seen Chamberlin perform at Water Street Music Hall on June 24, when they opened for another (dynamite) Vermont-based band, Grace Potter and The Nocturnals.  I was toting five friends along that night, Joe included, and, truthfully, we were there to see GP&N.  I, at that point, unfortunately, had known nothing of Chamberlin.  That, though, was soon to change.  Big time.  During the second song in their set that night, I can vividly recall Joe and I looking at each other with expressions that betrayed our unpreparedness for how truly great an “opening band” could be.  Wow!  Where’d these guys come from? They were really amazing.  I still (and quite emphatically) proclaim that the entire show we saw that night at Water Street was the best live performance I’d probably ever seen, and I’ve seen some pretty amazing shows along the way!  When I arrived home that night after the show, around 2 am, the first thing I did, before going to bed, was to log on to iTunes and buy their debut album, Bitter Blood.  Chamberlin has quickly come to be one of my absolute favorite bands to listen to.  Raw, pure, fresh, powerful, and just plain awesome.  The music this band produces has real guts.  Sand.  Interestingly, I discovered the following day, that the Bitter Blood album had been produced by Grace Potter and The Nocturnals guitarist, Scott Tournet.  Good, good stuff. 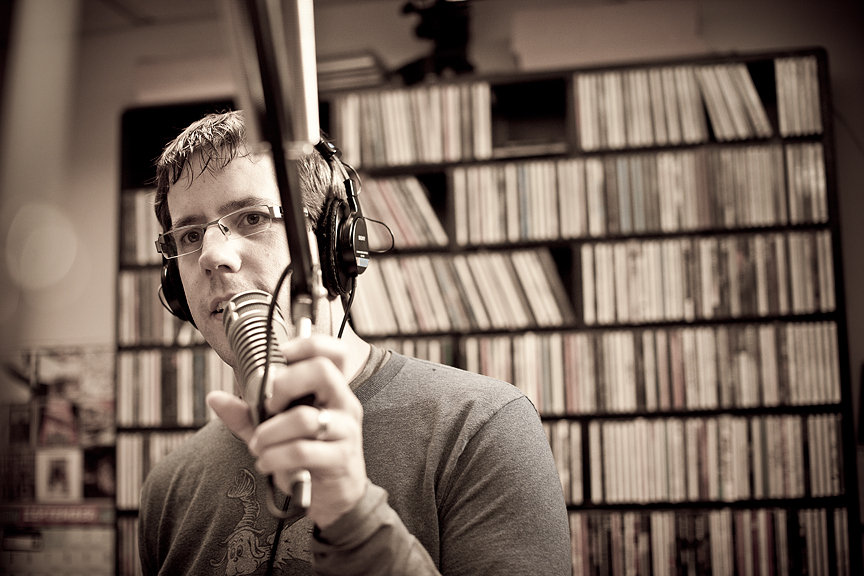 Joseph Mayernik, “The Mayor Of Nikville.” 270 degrees of gut-punching awesomeness.

During the interview that afternoon, as I recall, Mark Daly, the band’s front-man, described Chamberlin’s music genre as “Indie-Rock with a Folk influence.”  I would probably add that there is a modern twist in the unique blend of sound and energy that Chamberlin puts forth, and I really, really dig it.  There are other elements too, in much of what they do, that I might describe as natural or organic.  Combined with sweet rhythm changes, powerfully moving shifts in intensity, and dynamic, strong vocals,  Chamberlin exhibits a really interesting and nicely-gelled blend of traits that each of the musicians contributes to.  Eric Maier, the pianist and “supplemental percussionist” for Chamberlin was also along for the interview that afternoon, while the band’s other members:  guitarist, Ethan West; percussionist, Jamie Heintz; and bass guitarist, Charlie Whistler were downtown at Water Street setting up and doing sound-checks before the evening show. 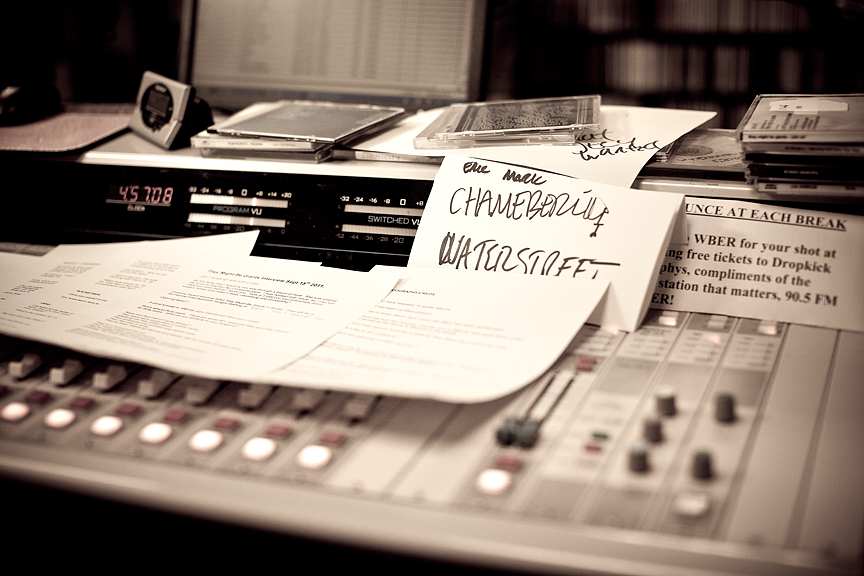 I had arrived to the WBER site a couple hours earlier in the day to set up a very modest lighting arrangement.  The studio space was tight.  The ambient light consisted of yucky, overhead fluorescent.  This photographer’s nightmare.  So, to add some life to the scene, I had brought along a single Lowell Caselite 4, a daylight-balanced (and bright) fluorescent source, and jacked it up high in the right corner of the room on a sandbagged C-stand.  This would give me the direction of light that I wanted, add some contrast, put sparkles in the eyes of the subjects, that sort of thing.  Simple, but effective.  Just right. 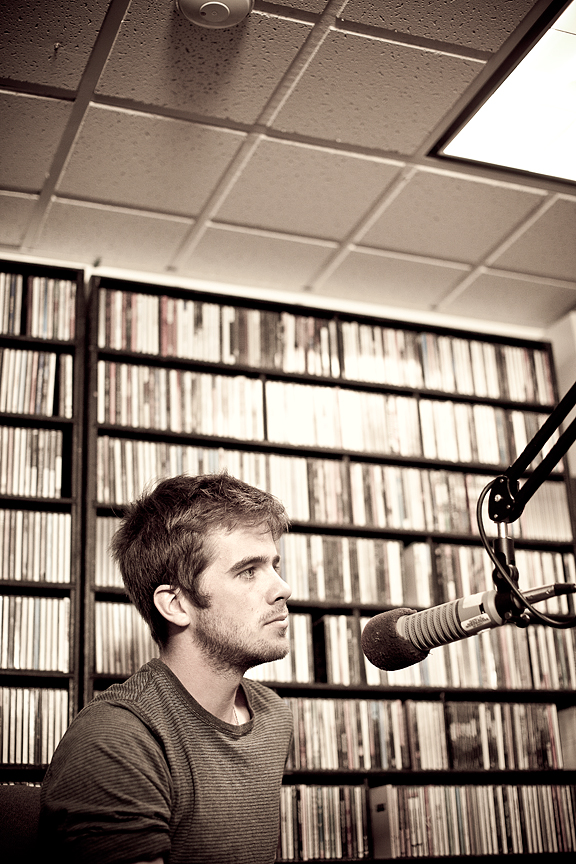 Eric, absorbing and contemplating Joe’s “Would You Rather” question.

I so enjoyed having the opportunity to experience and photograph the whole interview process.  The studio space made for a wonderfully intimate setting, both for the photography and for the music.  Mark had brought along his Taylor acoustic / electric guitar to play during the hour-long, live-broadcast, and wound up performing the songs “Turn Around,” from the Bitter Blood album, and Chamberlin’s cover of Passion Pit’s “Little Secrets” from their just-released Cabin Covers EP.  In that small space, it sounded and felt really fantastic.  Stripped down to the basic elements.  Pure, powerful and perfect.  One of the things that impresses me most about Chamberlin is their dedication to making recordings that are live.  From what I understand, overdubbing in their studio recordings is very minimal.  The result is that what you hear on the CD’s you buy, or on iTunes downloads you carry in your pocket are wonderful representations of what you’d get from these cats at a live performance.  These guys are not only purists.  They’re very, very talented musicians. 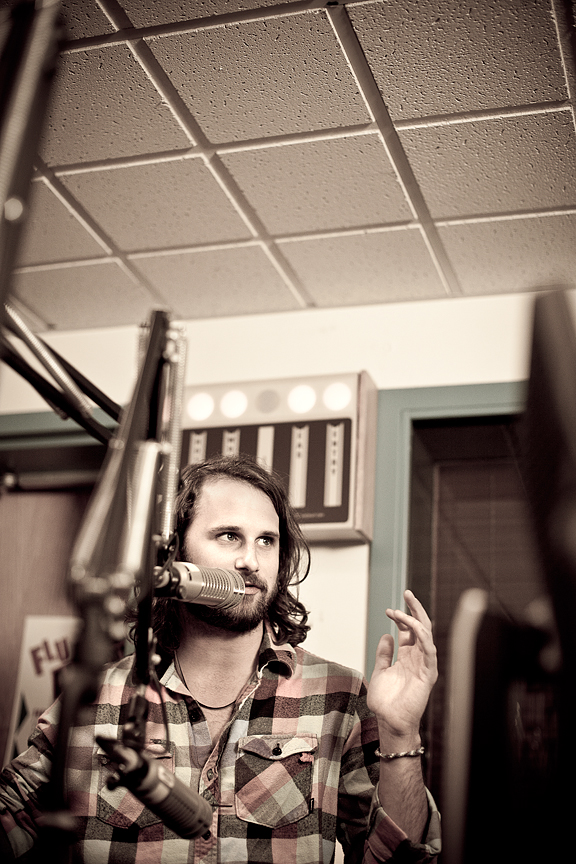 Mark, on training the “vocal muscle,” and lessons learned from their friends, Grace Potter and The Nocturnals.

I worked around the tiny room during the interview, shooting with nearly wide-open apertures, and trying to catch natural, candid expressions, interesting compositions, the energy of the moment and the process that was unfolding before me.  I didn’t have a sound blimp for the camera body, so I was trying to be conscious of my proximity to the microphones, and trying not to shoot too much during the quiet pauses in the conversation.  Joe, the consummate professional, had inadvertently left his well thought-out list of interview questions at home earlier that afternoon, and was very gracefully improvising and going “off the cuff” during the live broadcast.  Awesome! 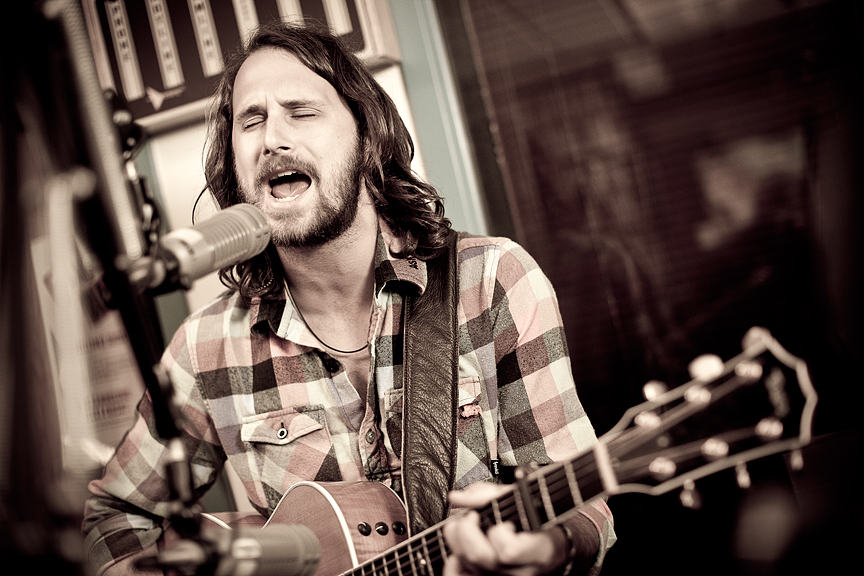 I was really happy with the body of work that came from this short hour of photography.  The collection of images shown here represents only a fraction of the “good stuff,” and it’s been difficult to edit down much further.  For me, one of the greatest successes of this shoot was in its simplicity.  I really love to work with pared-down lighting and camera gear, photographing people who are comfortable and in their natural element – especially in environments that convey a sense of intimacy or ease.  The combination of these things seems to help me create images that allow the viewer to feel as though they were part of that moment, right there, among those who were photographed.  Cool stuff. 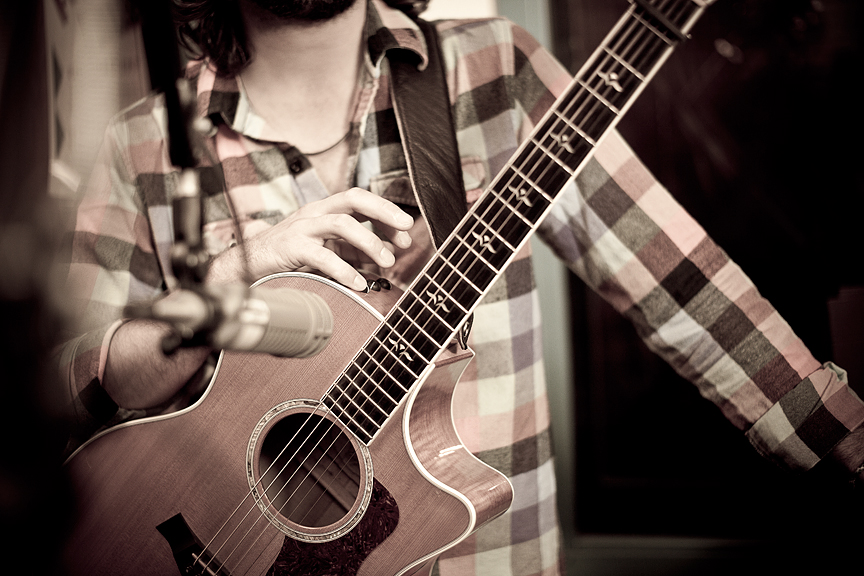 Mark and his sweet Taylor 614 (I think) acoustic / electric. 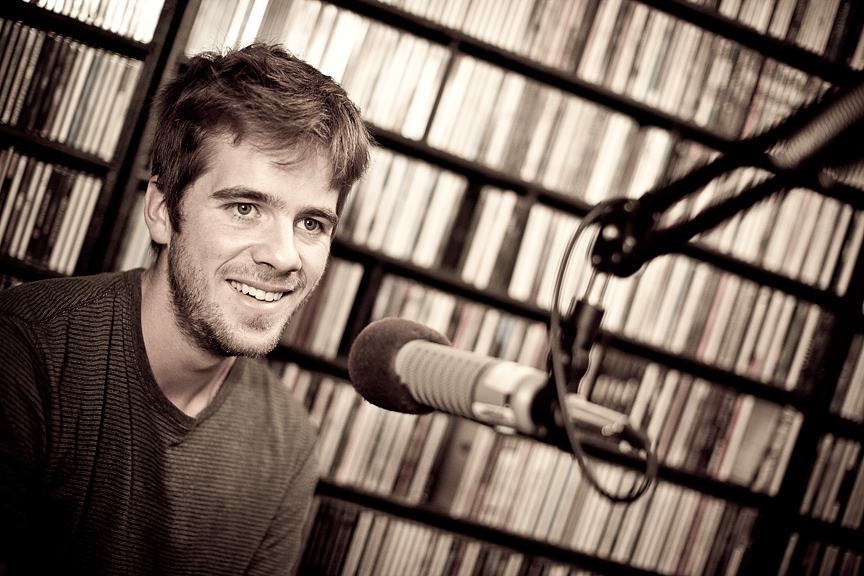 Eric, on touring, and what makes Chamberlin tick.

The timing of this blog post is not entirely unplanned.  Chamberlin, you see, is currently headed East on the back-end of a nation-wide tour and will once again grace the stage at Water Street Music Hall. One week from this evening, on Thursday, November 3, the band will be right back here in Rochester, NY.  This time, though, Chamberlin is headlining and their guests are Wildlife.  We will surely be attending with a larger group of friends this time!  Tickets to the show can be purchased at Water Street Music Hall’s site. Hope to see you there! 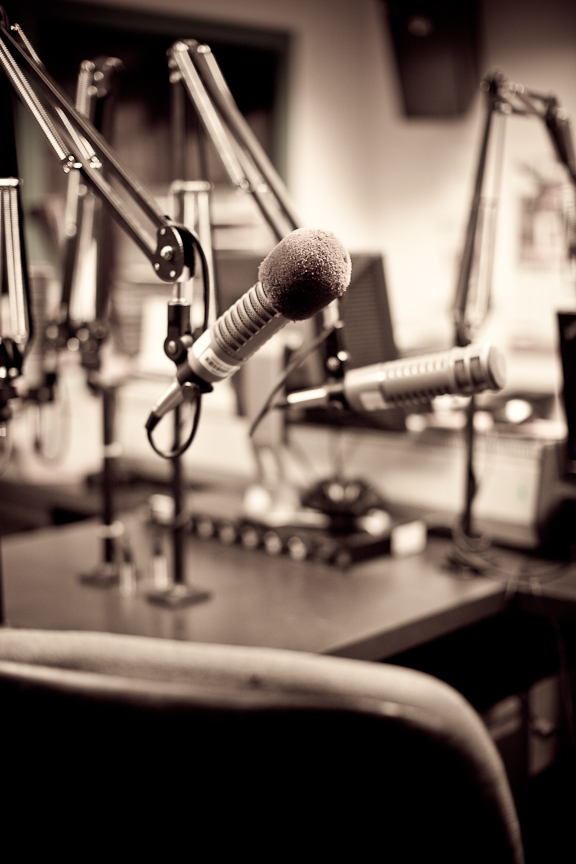