The River of Secrets 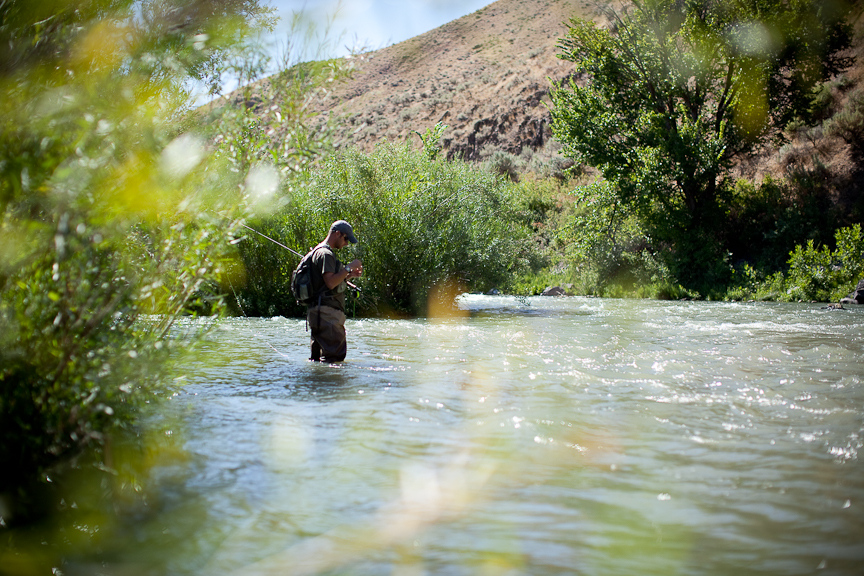 Matt tying on a new midge, just moments before tying into a really, really nice brown.

I never suspected that I would have found myself flyfishing for trout in what struck me as such a harsh climate and unlikely location on the map.  I am, quite frankly, still in amazement that those fish not only exist among that landscape, but seem to flourish.  Brown trout.  Big ones.  This river, for me, would, in part, set the “symbolic tone” for the rest of a journey that would exceed my expectations on many levels, especially in the very pleasant surprises it would reveal to us along the way. 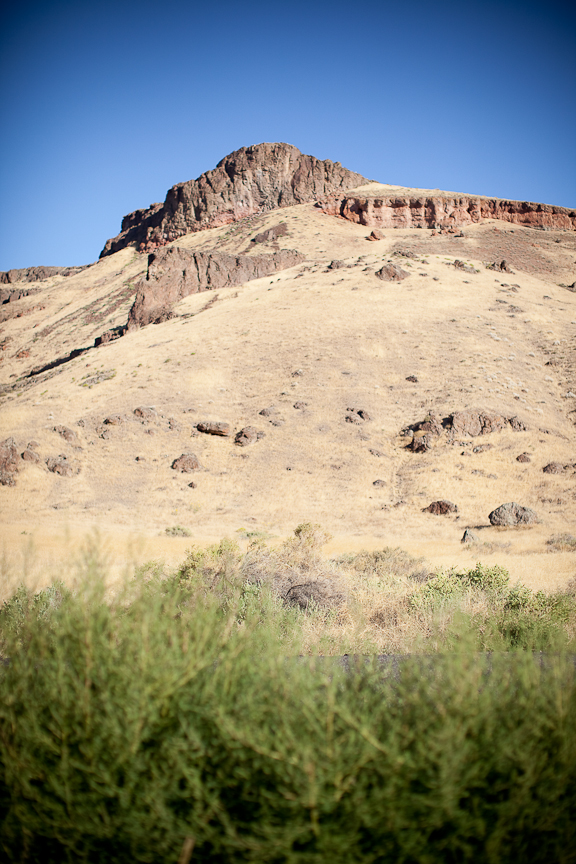 Getting closer to the river.

The river that Matt Smythe (who also goes by the flashy, five-dollar handle, fishingpoet,) and I began our “creative expedition” on was one that we found to be swathed in secrecy.  It really has kind of a cult following among the hardcore flyfishing addicts of the area.  It seems to me, to be a very tight-knit group.  People who are “in-the-know.”  Our guides for the first few days of this journey were Rebecca Garlock, aka The Outdooress, and her (very cool) husband, Robert.  The two had invited us to fish and photograph these seemingly sacred waters with them, and in doing so, had generously allowed us into the fold.  The catch was, we could never utter the name of the river once we returned home.  From the moment we first wet our waders in that cold, rushing water, we had signed a blood oath.  This water would forever be known as River X. 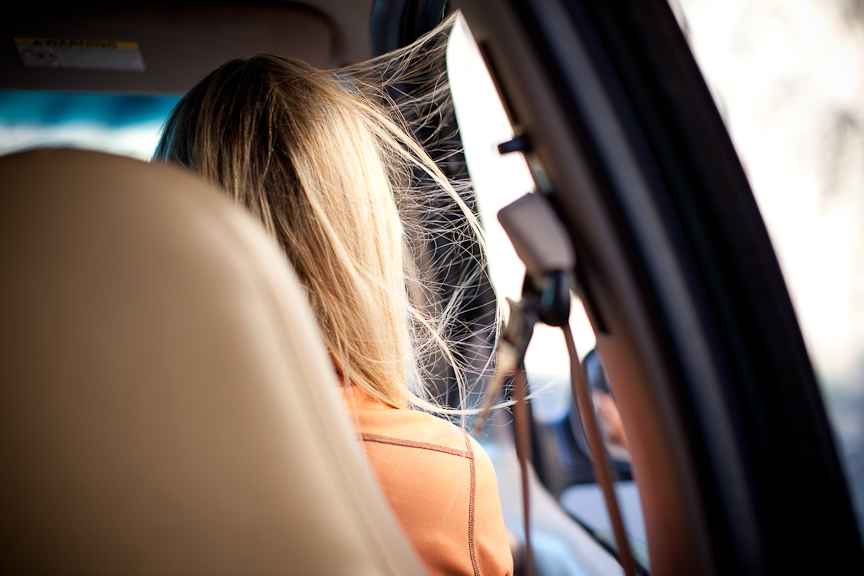 When Rebecca and Robert picked Matt and I up at the Hampton Inn / Meridian, Idaho that morning, we were all pulsing with the excitement of the coming day.  We’d had such a wonderful dinner the night before with Jason and Vicki Lindstrom of Flytooth, and had made our plan of attack over some really delicious food at a Basque joint called Epi’s.  Matt and I had rushed through our breakfast at the hotel that morning.  So much so, that I didn’t even have time for the “Make-Your-Own-Waffles” machine.  Rats.  Well, they didn’t stock Vermont Maple Syrup anyhow, and yeah, I’m a syrup snob.  So, jet-black hotel coffees in hand, we hustled our gear outside so we wouldn’t be late.  We had a bit of a drive to get to where we were going, and we were all excited to get there and start catching some good fish.  I was traveling fairly lightly with the laptop, one camera body, and a small handful of lenses, and was anxious to start getting some great photographs under my belt.  On the way to River X, we stopped off for fuel, ice, coffees, a huge Diet Coke for Rebecca, and a few bags of Jack Link’s Beef Jerky.  This would become the morning ritual for much of the remainder of the trip.  Matt and I must have eaten sixteen pounds of jerky that week.  Lord knows how much coffee. 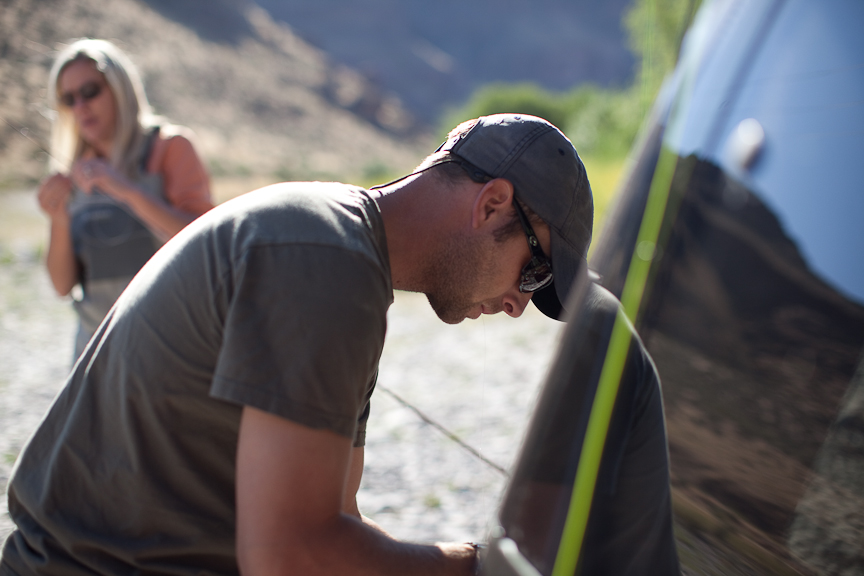 Rigging up for the first morning on River X.

Matt and I were in awe, gawking out the windows of the truck and taking in the amazing, changing landscape as we headed into the desert canyons of southern Oregon.  Sagebrush, willows, rocky terrain, rugged hills and canyon walls.  To us, coming from the Northeast U.S., this was such a foreign landscape.  Fascinating and alluring.  It seemed to me, though, an unlikely area to find a river teeming with chunky  trout.  It was far too dry, hot and inhospitable for fish.  It went against everything I knew about trout habitat.  That’s what was going through my head as I rolled the rear window down to take a few shots with the camera.  That’s when we came around a sweeping bend in the road and got our first glimpse of the river.  It was gorgeous. 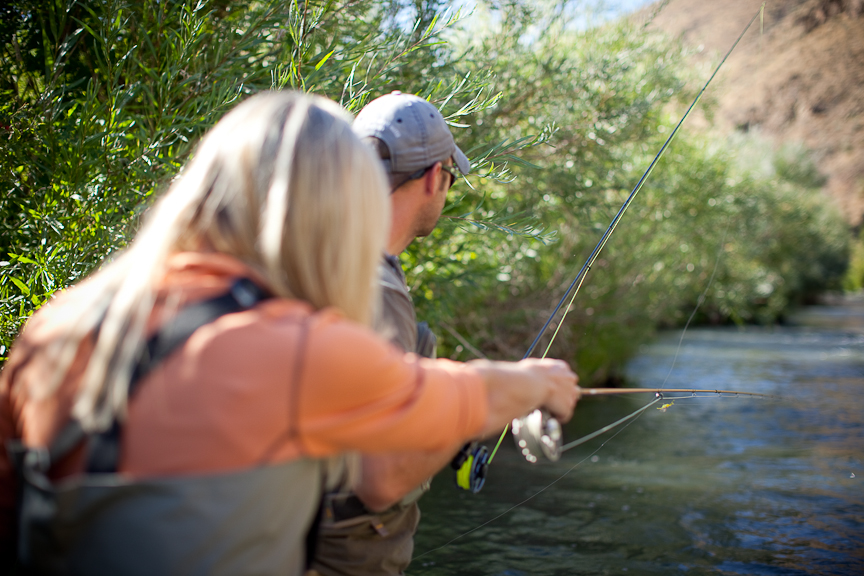 Amidst a great deal of chatter, we parked the truck at a pull-off near the river, and geared up.  It was busy, energized activity.  At least, that’s how it felt on the inside.  I was pressuring myself to bring my “A-Game” today.  Kickoff time.  Outwardly, though, all of us seemed pretty relaxed.  Rebecca was rattling off a list of flies and tactics for Matt to try as he meticulously pieced his Scott 5-weight pack rod together.  I had my hands full with my waders, boots, camera rig, and a waterproof sling pack that turned out not to be very waterproof after all.  Thank goodness I had taken an extra level of precaution.  After a firm warning from Rebecca about the ant-laden willows, we clacked over the rocks in our studded wading shoes, through the bushes and to the water’s edge.  Robert had scoffed at us “water-swatters” and headed upstream with his spinning rig.  Slipping into the current, I was amazed at how very cool the water was.  I’m sure it wasn’t even 60 degrees.  Fed by snow-melt from a heavy winter in the mountains, River X flowed in stark contrast to the relentless sun striking our backs.  In the rising heat of that morning, the water’s coolness was welcoming. 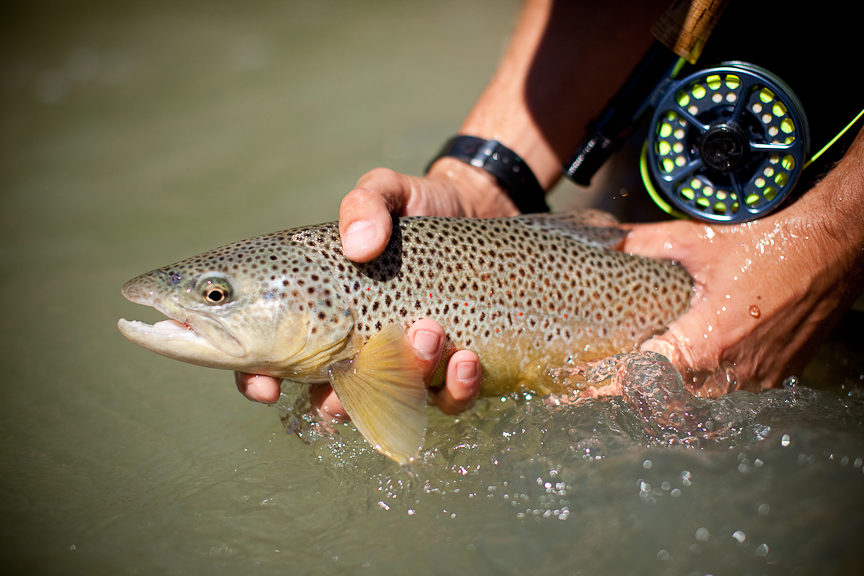 I photographed around Rebecca and Matt while they fished different seams, and targeted pockets around structure, maybe a hundred yards or so from each other.  We talked, laughed, and got to know each other.  Rebecca was the first to connect with a fish, and then Matt would, a short while later.  Then, they each caught some more.  In the strength of that slightly milky current, with slick underwater rocks of different sizes and shapes, carrying the camera, I chose my steps very carefully, not getting anywhere too awfully fast.  Back and forth, between the two anglers.  Casting shots, portraits, landscapes, and pictures of some gorgeous fish!  Every now and then, I’d leave the river and head back to the truck to load image files into the laptop, chug down a cold bottle of water, grab a couple hunks of jerky, and head back through the willows for more action. 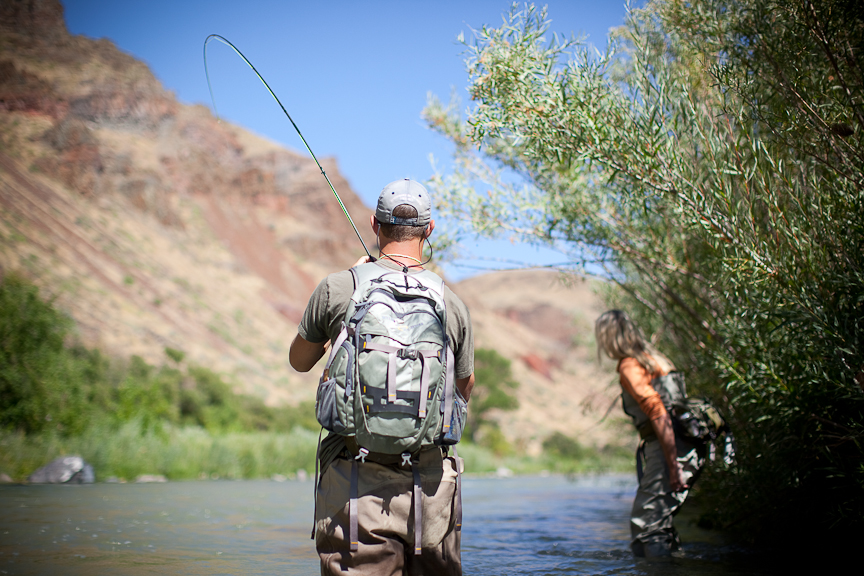 Good fish on.  Again.  About now, my rod hand is starting to get itchy for some cork.

That afternoon, in the shade of a big tree next to the river, Robert grilled us an incredibly tasty lunch of sausages and bacon-wrapped tenderloin.  All the fixin’s, too.  It was delicious.  Still, we didn’t sit too long.  I was ready to think of doing some fishing myself, and rigged up my Scott 6-weight, heading down to the water for a little practice session.  I was feeling pretty rusty.  Not long after, the others hollered to me, and we all hopped in the truck to head up the road to another spot, farther upstream, on River X.  Interestingly, this place offered a very different scene, where, from a high, boulder-strewn bank, we could gaze into the river below us and see the forms of large browns suspended in the water, feeding.  At different intervals these fish were rising to gently slurp unseen insects off the water’s surface, giving us a good look at each one of them.  Some of them were true horses.  Toads.  Bruisers.  It was so cool.  Again, more planning.  Further anticipation. 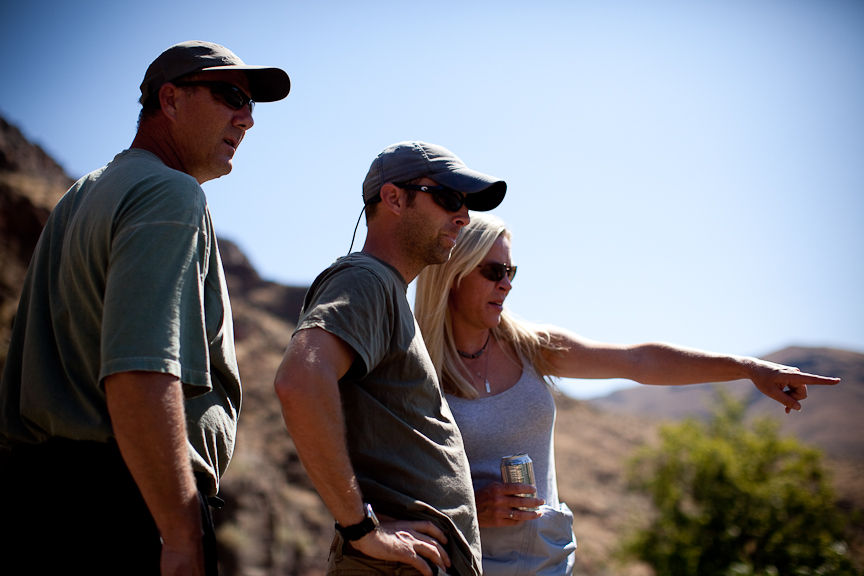 After getting our non-resident licenses checked over by a friendly-enough, (but diligent) Oregon Fish-and-Game Warden, Matt chose his path to what looked like a prime spot.  Leaving the camera in the truck, I grabbed my gear and headed upstream from him to see what I could do with these bruisers.  I heard Matt holler something to Rebecca about ants, but quickly refocused my attention to a pair of side-by-side Salmo Trutta that were working on their lunch.  With my back to the bank, I cast out ahead of them into a nice looking seam, again and again.  Nothing.  But they were right there! 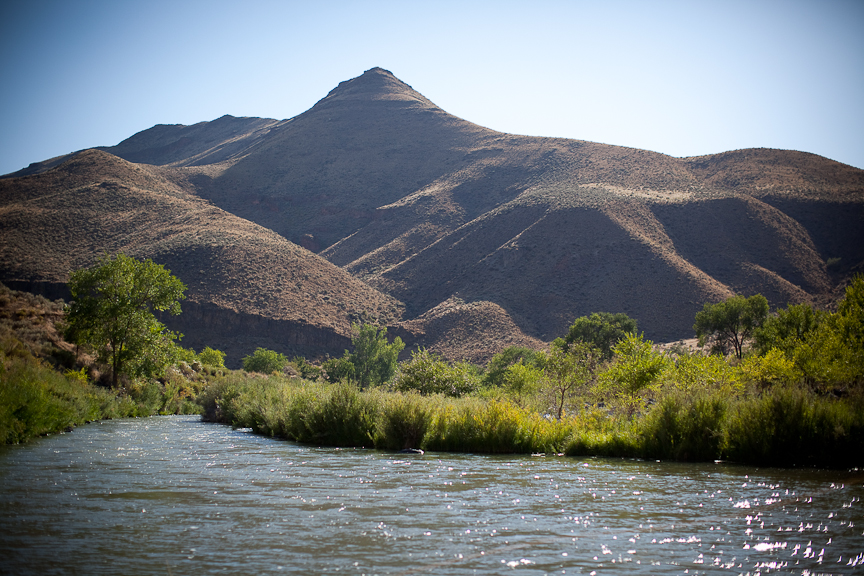 Farther upstream, where Robert would do well that afternoon.

Moving slowly upstream every couple of minutes, still nothing.  At one point, I heard a wet slurp behind me and to my left.  I could see the remaining swirl in the water when I turned.  I redirected with a couple of false casts, and laid my “hopper / dropper” rig, very sweetly, about twelve feet upstream from where the rise had been.  The foam grasshopper imitation I was using as an indicator floated along past the unseen fish, and suddenly disappeared.  Gloop! With a strip-set and a raised rod, the line came tight.  I had just hooked my first brown trout.  Ever.  He had taken the miniscule size 20 midge that Rebecca had given me that morning.  I whistled to Rebecca, and she came down the bank with the camera to get a few pictures of me with my fish.  One of her shots would be among my favorite photographs of the trip.  One that I wish I had taken!  That fish had some real character to him that seemed to fit what I was feeling inside about this place.  There might have been far bigger fish in that river, but to me, he was a real bruiser.  A beauty. 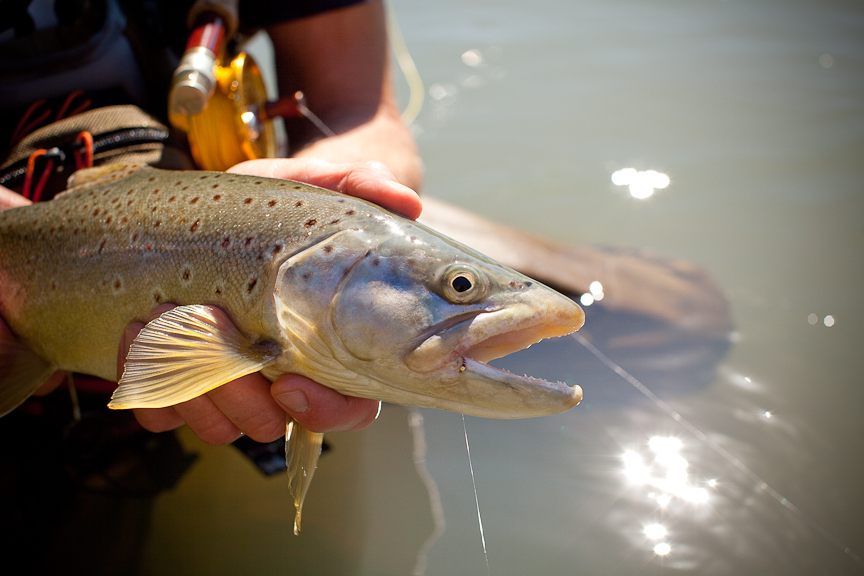 Rebecca’s photograph of me with my very first brown trout.  22 inches of attitude.  A wonderful “First.”

Now armed with a flyrod, Robert was doing pretty well for himself upstream.  We could hear him hoot now and then when he hooked a fish.  From several hundred yards away, I could see arc of his rod reflecting in the Sun, and the flash of a good trout in his hands as he released it.  I hustled upstream and joined him with the camera shortly after, but no more fish came along for him.  Hike back to the truck, and drive farther up the road for a relaxing sit in the grass, a Snickers bar recharge, and a visit before fishing a new spot to end the day. 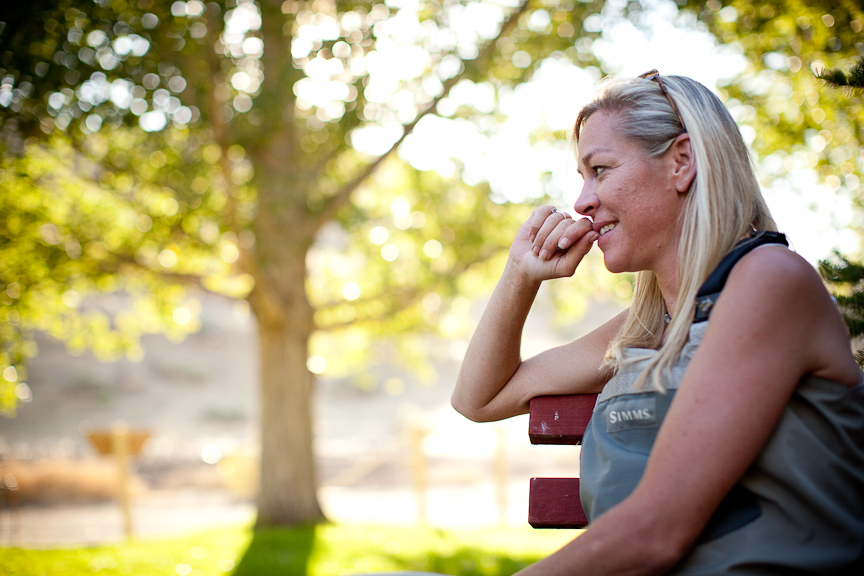 While the middle part of the day had reached the mid-80‘s,  the evening air in the desert had a coolness to it that made it necessary to wear a softshell jacket under my waders.  The water seemed colder upstream here, too.  Noticeably so.  Taking photographs from low angles, I realized, made it necessary for me to submerge further into the chilly water to where it threatened the top of my waders.  I shivered uncontrollably a few times as the rushing waters of River X sucked the heat from my core.  The light was flattening out anyhow, as the Sun slipped past the surrounding hills.  Time to put the camera away, get moving, warm up, and fish. 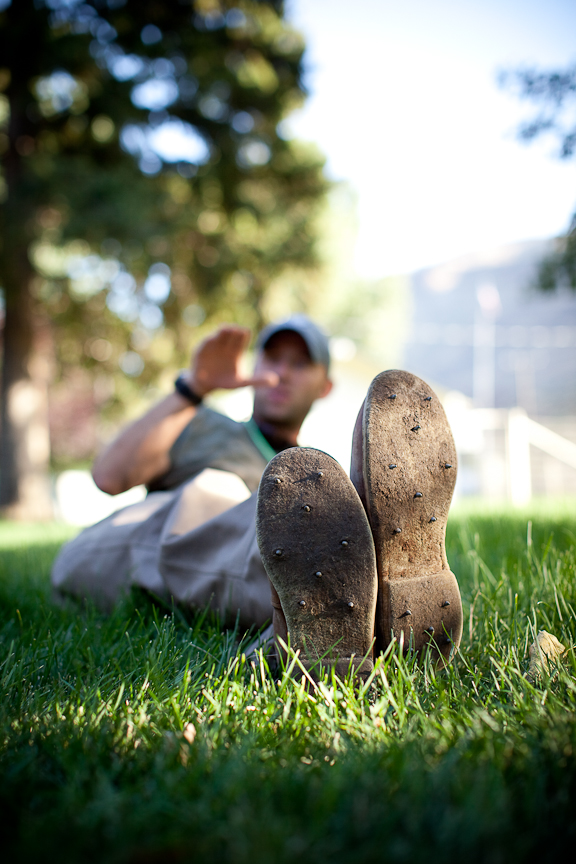 I gathered my gear and waded downstream from Rebecca and Matt, but we were all still in sight of each other.  Robert sat on the bank watching the camera bag and relaxing some.  I had only gone about 20 yards when I spooked a big mule-deer doe that was bedded among the willows just feet away from me.  Sorry, darlin’.  Didn’t mean to make you jump.  I cast my line again and again into good looking spots as I worked along the river, a few swirls and half-assed hits here and there, but no solid hookups that I could claim as any kind of success.  In my mind, I reflected back to my first and only fish of the day, my first brown ever, and recalled how he’d felt on the end of that line, the bend in my rod against that stellar blue sky, and how the strength of him felt to my hands as he slipped back into the current. 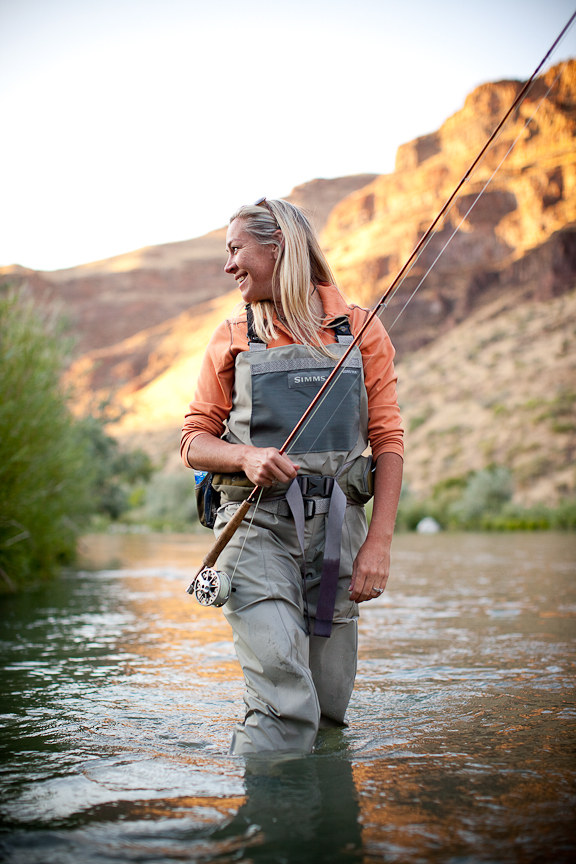 We still had another day on this river, and now, we were in the groove.  Immersed in it.  Tomorrow would be an epic day. 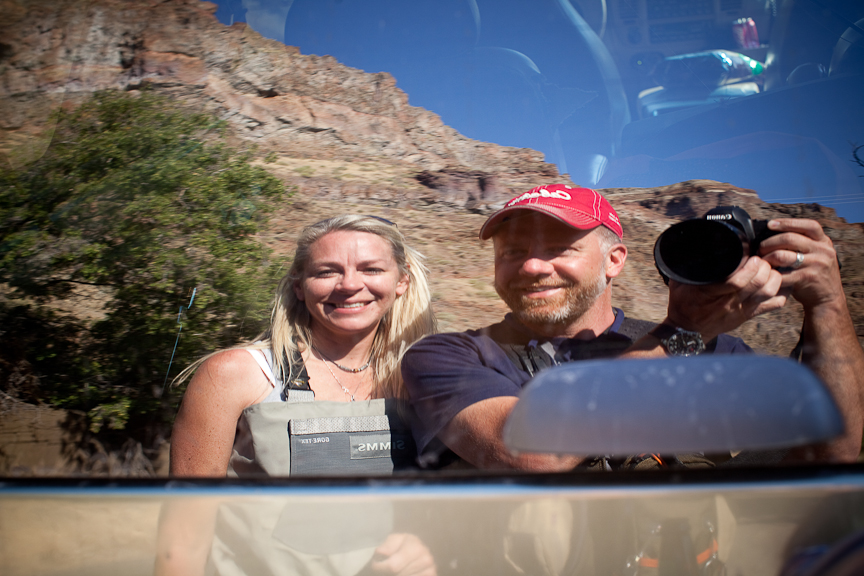 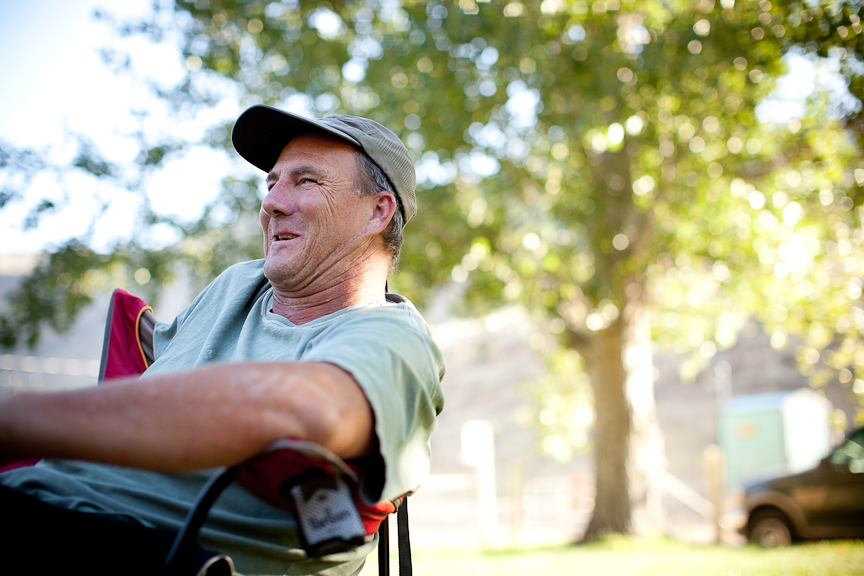 Our very good buddy, Robert. One Hell of a streamside chef. 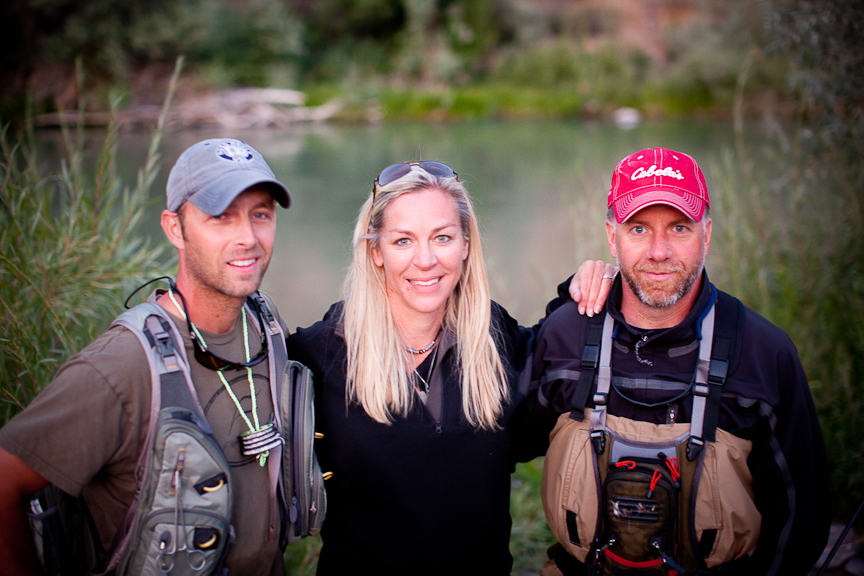 Robert’s photograph of us with Rebecca, at dusk.

[…] Grant Taylor from the blog Grant Taylor Images Weblog has written about our meet up here: Idaho on the Fly and  The River of Secrets […]