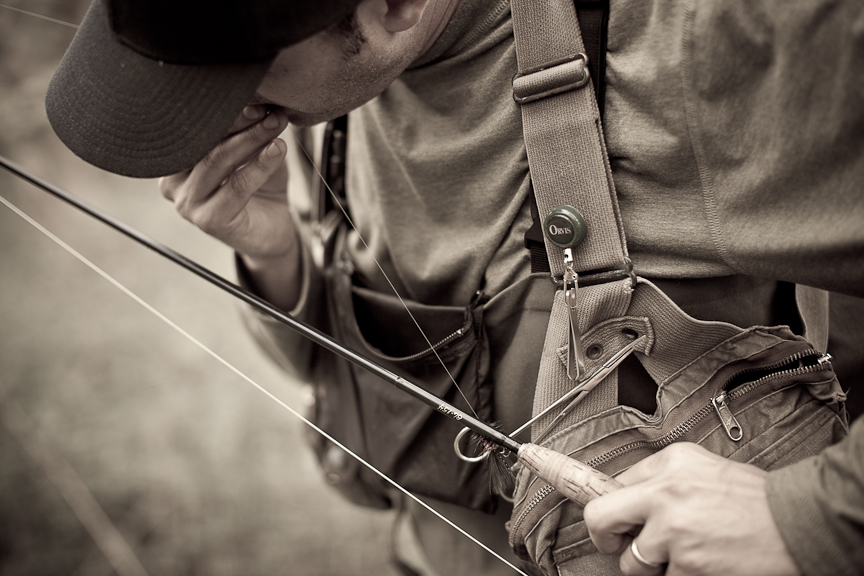 Dean adding split-shot to his leader.

May 14, 2011.  I met up with Dean Milliman early that morning in our normal spot.  I had arrived early this time, and was already in my old Simms waders when he pulled off the road.  Matt Smythe had commitments for the morning, but was planning to join up with us later in the day.  This would be our second outing to fish and create photography for our Trout Unlimited-Seth Green Chapter project.  We were into it fully now, and had some great work under our wader belts already.  A handful of posters for the campaign had taken shape, and we had begun to talk about shooting footage for a video component or two. 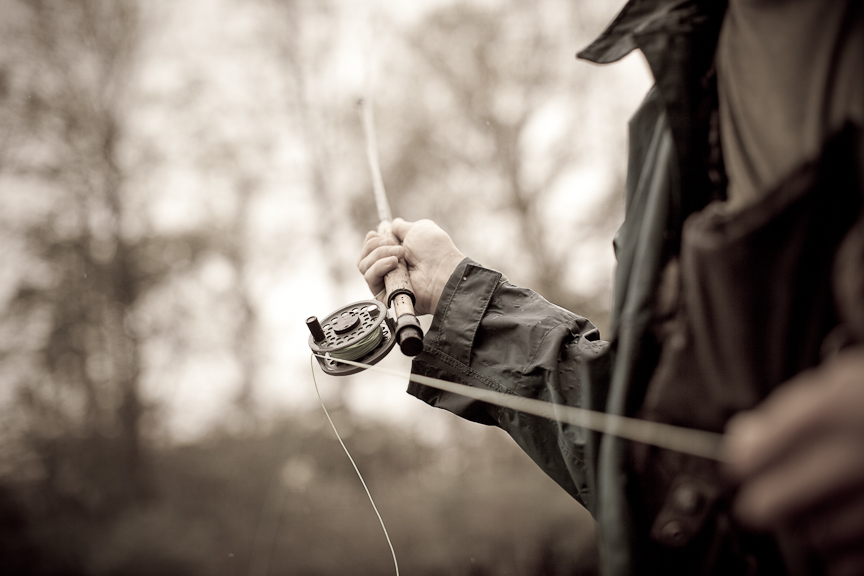 Coaxing one up on Spring Creek in the late morning.

With the wet Spring we’d had in Western New York and most of the Northeast, the ground was already pretty heavily saturated, and water levels in the creeks were on the high side.  Thunderstorms and steady rain had pounded our area all night long, and in the morning, arriving at Oatka Creek, we realized that the fishing conditions were going to be pretty unfavorable.  Dean had used his iPhone to check the Oatka Creek Water Level Charts, and had seen that the last reading at the USGS-Garbutt, NY reading station was around 3.2 feet.  The watershed that feeds The Oatka still had to drain all of the moisture from the night before, so Dean knew that the sucker was going to rise some, and muddy up.  Not good for fishing.  Not one bit.  Still, we pressed onward. 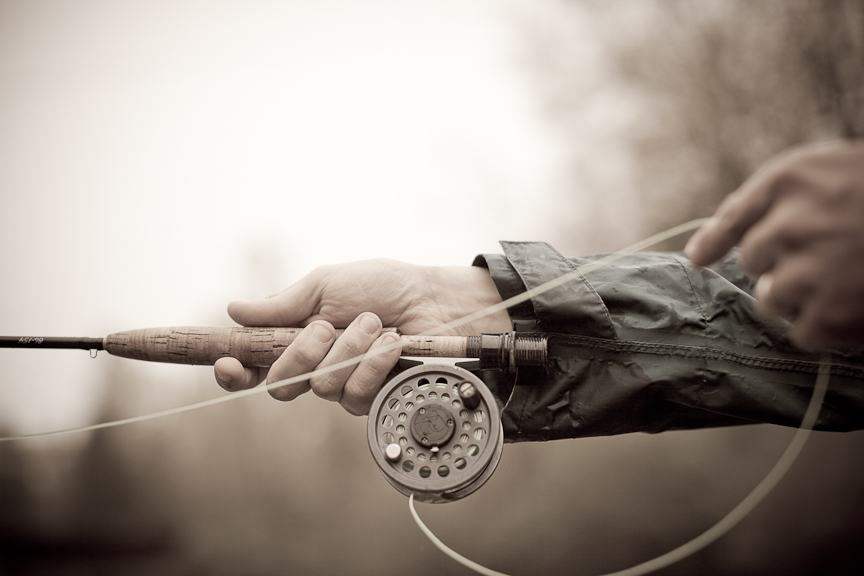 We spent the morning working together, casually at times, conversing and laughing while Dean peppered some good-looking runs of the creek with bead-head nymph patterns.  Roll cast after roll cast, mend after mend.  Not much action.  I still worked around Dean with the camera, shooting details, environmentals and landscapes, crouching in such a way that the creek’s cold, moving waters threatened to find their way over the top of my chest waders.  At times, only an inch or two of neoprene protected me from a very wet and chilly awakening.  About mid-morning, I had felt it was getting increasingly difficult to hold my footing among the rocks in the creek bed.  The flow of water had increased noticeably.  Dean had the splendid idea of leaving the now rising and silty Oatka, and heading down the road a couple miles to Spring Creek in Caledonia.  This spring-fed creek boasts notoriously gin-clear waters and does not have the massive watershed that affects Oatka Creek with runoff.  Spring Creek wouldn’t likely be under the same, unfishable conditions, even on a nasty day like this. 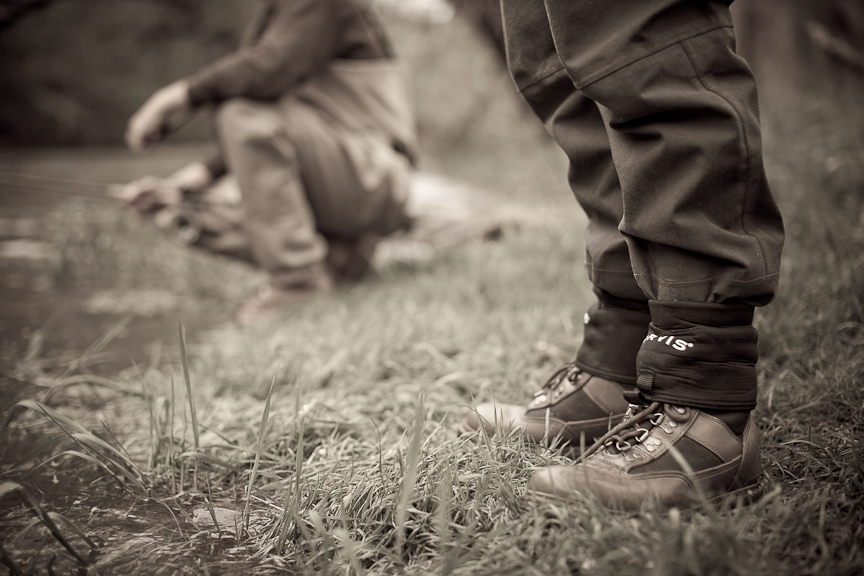 Dean and Matt reading the water on the “Private Run.”

We were the only ones there.  At least initially.  We re-rigged, hiked in to one of Dean’s favorite spots, and got back to it.  Dean, intent on nymphing a very specific run, and me kneeling in the waters just in front of him getting some great shots.  It was raining again, relatively lightly, and the sky had darkened considerably.  Our bellies were growling, and it got our minds churning on lunch and good, grilled burgers.  Wait!  No!  Dismiss that thought for now!  Back to fishing. 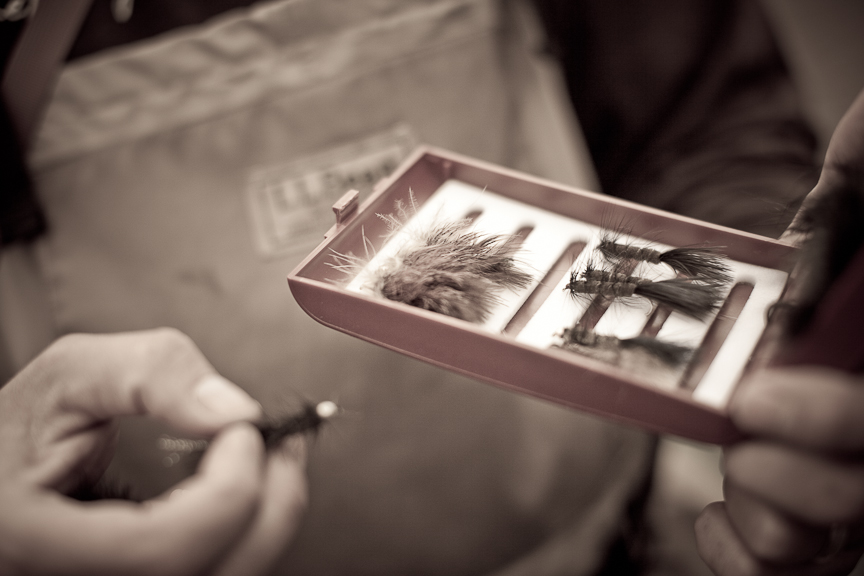 Eventually, Dean came tight to a really nice brown.  The trout of Spring Creek are known for their color, and this one was very handsome.  He had some decent meat to him, but still wasn’t who we were hoping to run into.  After a few camera shots, Dean released him and began casting again.  About now, our area on the creek was starting to get a little popular with some of the other guys that had rolled in.  Before too long, our cravings got the best of us, and we hiked out to the truck.  We hit the grocery store on the way back to Dean’s house, and picked up the necessities for a good cheeseburger lunch.  One with all the fixin’s. 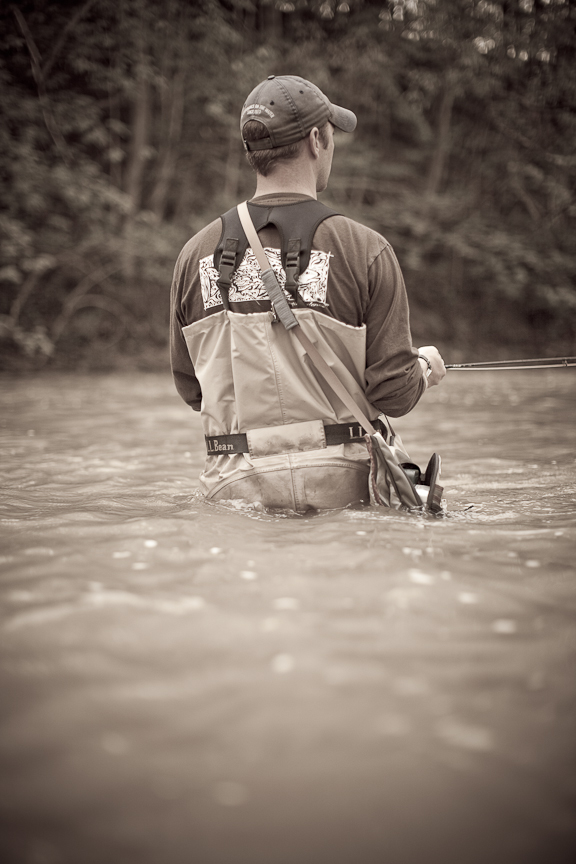 Matt working a run in the afternoon.

Fed and happy, we enjoyed a couple cold beers and a nice visit with Dean’s wife Jane, their daughter, and their two ferocious hounds.  Matt showed up some time later, and after making a plan, we trucked out to a piece of property that was owned by a friend of Dean’s – one that would provide us access to a somewhat restricted stretch of Oatka Creek that is known to hold some truly big brown trout.  As good as a creek might be, though, unfishable is unfishable.  The waters on The Oatka had risen even further, and were just plain opaque with silt from runoff.  Rather than nymphing, the guys mostly chucked Wooly Buggers into the current, knowing full well that some beasts were there to be caught.  Problem was, the beasts weren’t very likely to see the Wooly Buggers in all that murky water.  No dice. 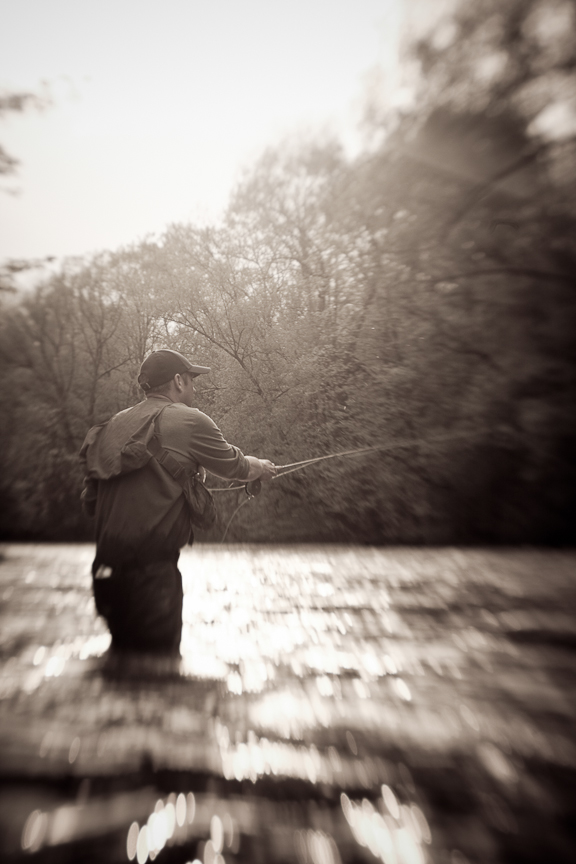 Dean casting in a spot of late-day sun.

We did get a spot of sun late in the day, and plenty of really nice images for the campaign.  That evening, we were treated to a delicious, hot dinner of tuna casserole that Jane had worked up for us.  It was a beautiful and well-deserved end to a long day.  We visited on their front porch later that night as thunderstorms revisited the area.  These storms, and the rain that would come in the following days would cause Oatka Creek to rise another two-and-a-half feet in the next 48 hours, and the creek would not be fishable for another two-and-a-half weeks. 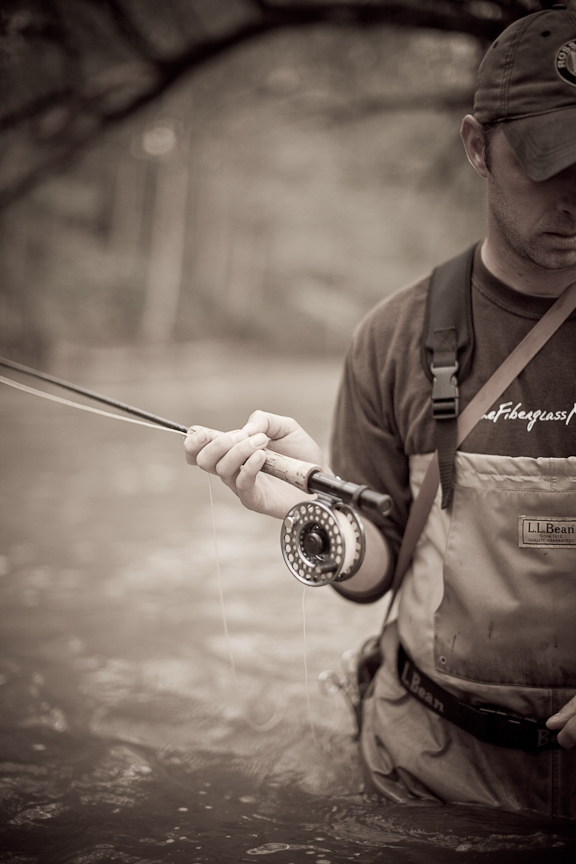 Heading back to the bank for a creekside creative meeting.

As I write this post on the evening of June 15, we are planning to fish the “private” stretch of Oatka Creek in the morning.  Matt’s meeting me at the Starbucks in Henrietta again, at 6.  We’ll coffee-up, and head south in Dean’s direction.  Hopefully, tomorrow will bring some better luck, and some bigger trout.  Fish with shoulders. 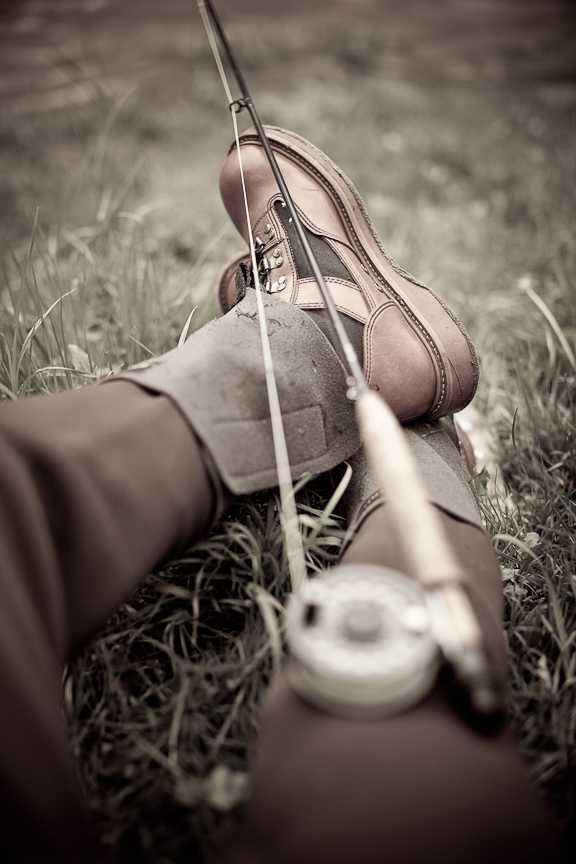