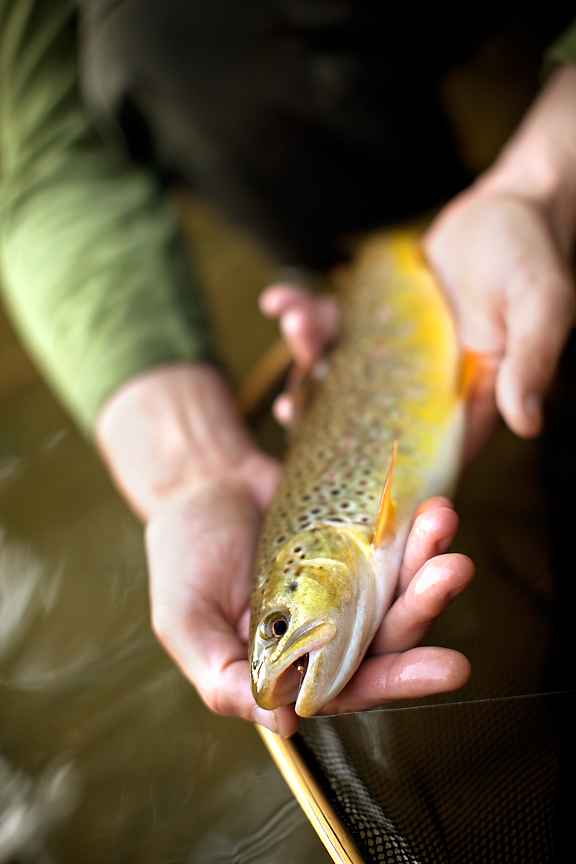 The first fish of the day, a beauty of a brown trout.

After several outings for creating photography and several more for videography, our project for the Seth Green Chapter of Trout Unlimited was getting pretty close to wrapping up.  We had a great body of images to pull from for the poster series and for the downloadable wallpaper set.  Now, being guys that love to fish, though, and being guys that pay great attention to detail, and, well, just being guys, we collectively agreed to go back out for one more trip to see if we could catch some larger brown trout.  A couple of the images in particular, while already beautiful, in our minds might carry more impact if they’d been made with some “more solid” fish in hand. 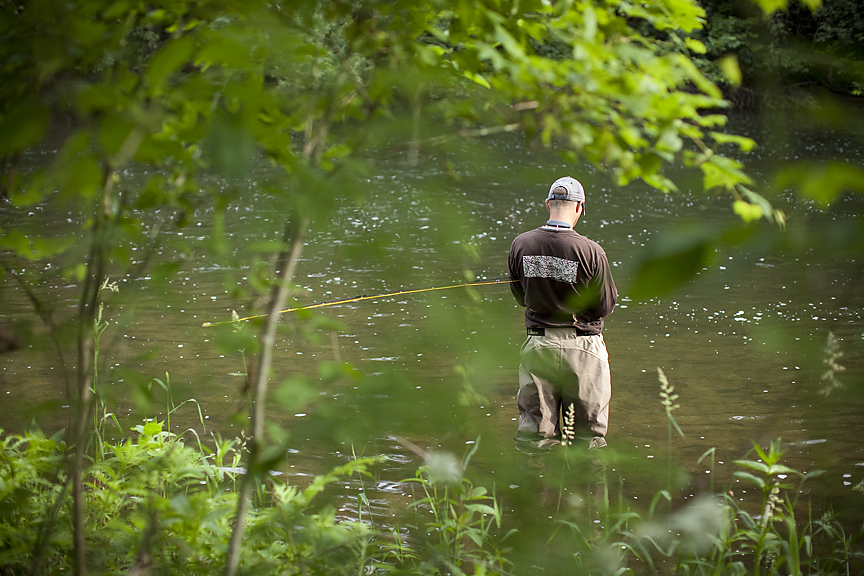 Absorbed in a moment of tranquility, Matt pokes through his fly box for something yummy-looking.

Going along with the wonderful little morning routine we had developed through the course of our project, Matt drove up from Canandaigua to meet me at the Starbucks in Henrietta, grab coffees, hop in the Tundra and head south to meet Dean at Foxy’s in Scottsville.  Now, for the record, the parking lot at Foxy’s had merely become a convenient meeting spot for us.  We didn’t venture in.  Ever.  Besides, at this time of day, it’s doors are locked up tightly.  See, Foxy’s is a little “exotic dance” type of joint.  At least that’s what we had heard from others that had experienced it. 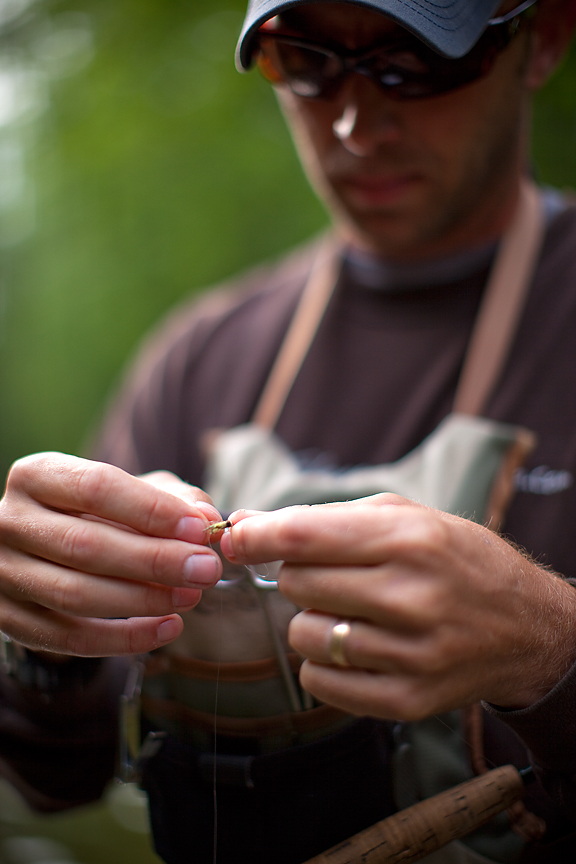 Matt tying on the nymph he had selected.

Dean rolled in to Foxy’s, added his waders, boots, rod and reel to the growing pile in the truck bed, and hopped in the back seat.  This morning, we were going to fish a stretch of Oatka Creek that is really only accessible through private land, doesn’t see much fishing pressure, and is known to hold some good fish.  We were all pretty excited at the prospect and the possibilities that this place held.  With Dean’s connections, we were actually able to drive down a utility road on his friend’s land and park right next to the creek.  Not exactly “roughing-it,” but we sure weren’t complaining! 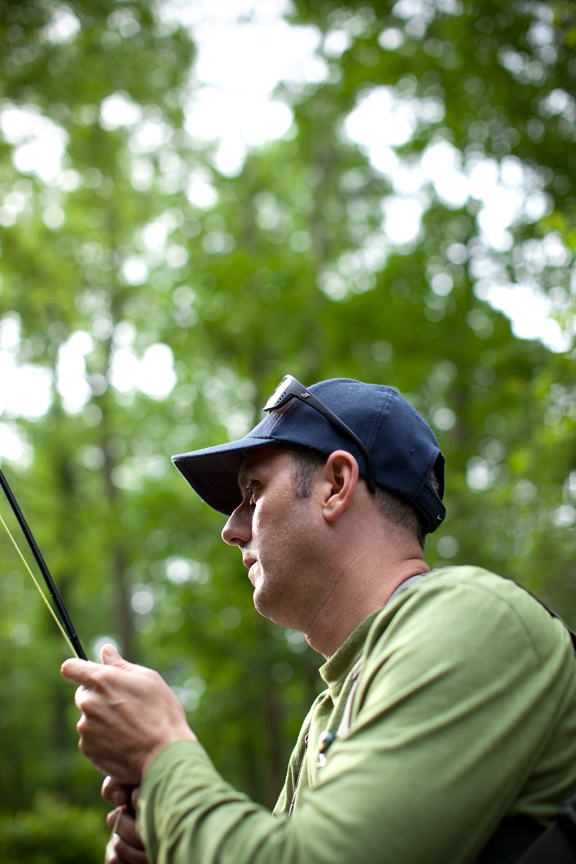 Dean easing in his first fish.

I shot video of the guys gearing up at the tailgate for a little bit, and then got into my own chest waders and boots.  We eased up to the creek and while the guys began reading the water and making their plans, I was reading the light and making plans of my own.  It wasn’t too awfully long before Dean hooked his first fish.  I was right next to him at the moment, and could tell that this one was substantially meatier that the other browns we had seen so far.  Once he’d brought the fish into his release net, I knelt in the water next to him and composed the images I had hoped to capture.  We didn’t have too long.  Not much more than a minute, really.  We’re trying to be conscious of the fish’s health and do our best to release them safely without creating too much stress for them.  Dean had submerged the trout so it could breathe some, and then I could really only get a handful of additional shots before it was time to let the fish go.  I had said to Dean a few moments later, after scrutinizing the images on the laptop, that if we didn’t catch anymore fish that day, I was extremely satisfied with what we had already.  That first one was a beauty. 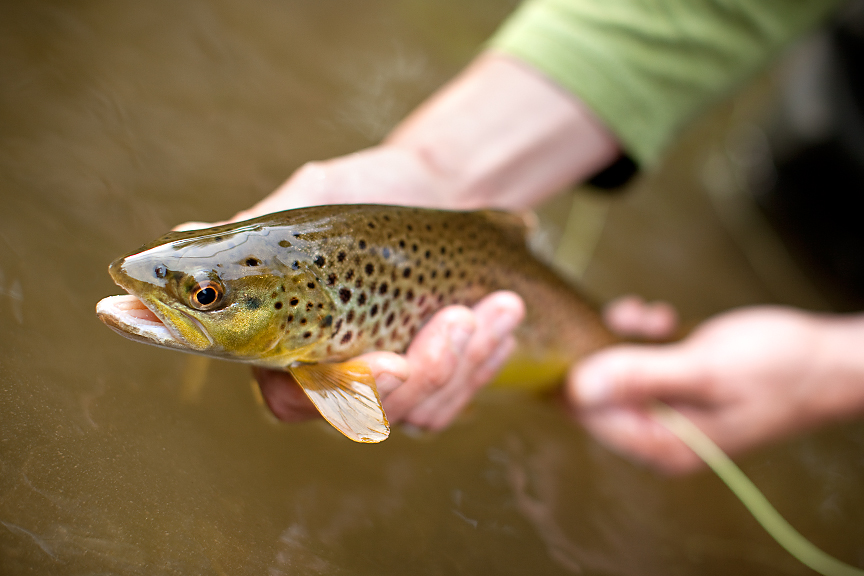 Another good trout that would come to the net a short while later.

We did wind up having another fish come to the net, one that had a little different character than the previous one, and succeeded in capturing a few more really strong photographs.  We were having a really good morning.  Heading downstream, we explored some new water, shot more video footage, and came up empty-handed as far as trout were concerned.  Time for lunch.  Truck bed full of wet waders and boots, we rolled into Caledonia, picked up some supplies at the grocery store, and headed over to Dean’s house to grill up some Zweigle’s hot dogs for our lunch.  Mustard, onions, relish, chips.  Washed ’em down with a couple ice-cold Sierra Nevada Pale Ales, and relaxed on the front porch for a while.  Matt even fell asleep in his chair for about twenty minutes, mouth agape, while Dean’s dogs snarled viciously at each other as they fought over the rights to a rubber ball.  Dean and I just kicked back in our chairs, sipped our beers quietly, and took it all in.  It was a perfect day.  Perfect. 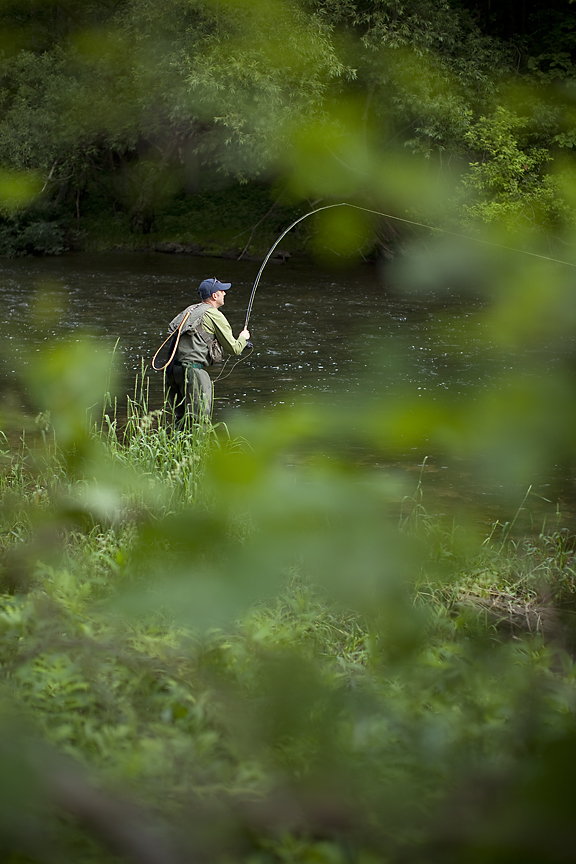 Dean picking up his line at the end of a drift.

At this point, the images have all been edited, final picks have been made, and a video has been edited and put together.  Maybe there’s still a little fine-tuning that Dean and Matt are wiggling out in the design and copy, but it’s pretty much a wrap.  While that’s a very satisfying accomplishment, I had really been enjoying our collaboration and routine.  Kind of hate to see this one end.  Fortunately, there will be many others to look forward to!

In an added note, none of the brown trout encountered during our project were eaten, injured or otherwise maligned.  All swim freely, and happily so. 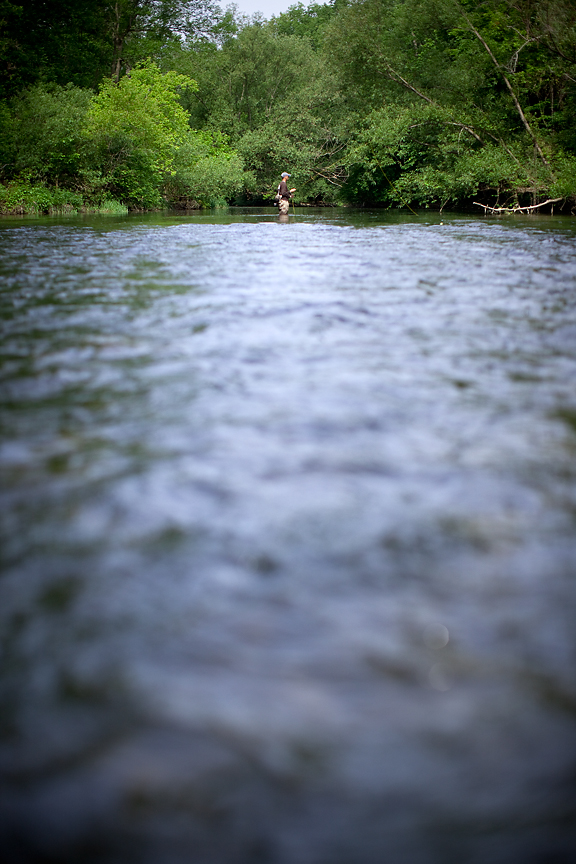 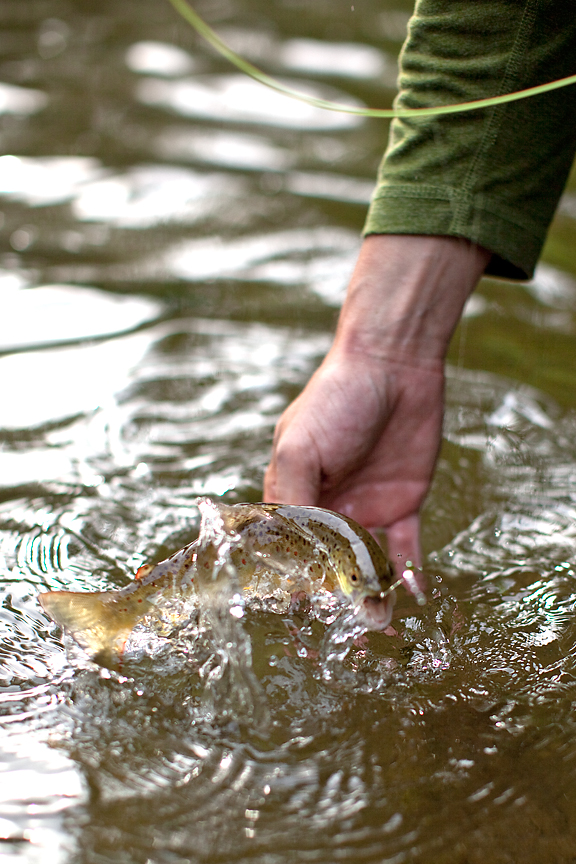 Just beautiful images and a terrific story. Thanks Grant.

Very nice pictures and I enjoyed hearing your thoughts on composing pictures. It’s interesting to hear a photographer’s viewpoint on the small stream. Great stuff…