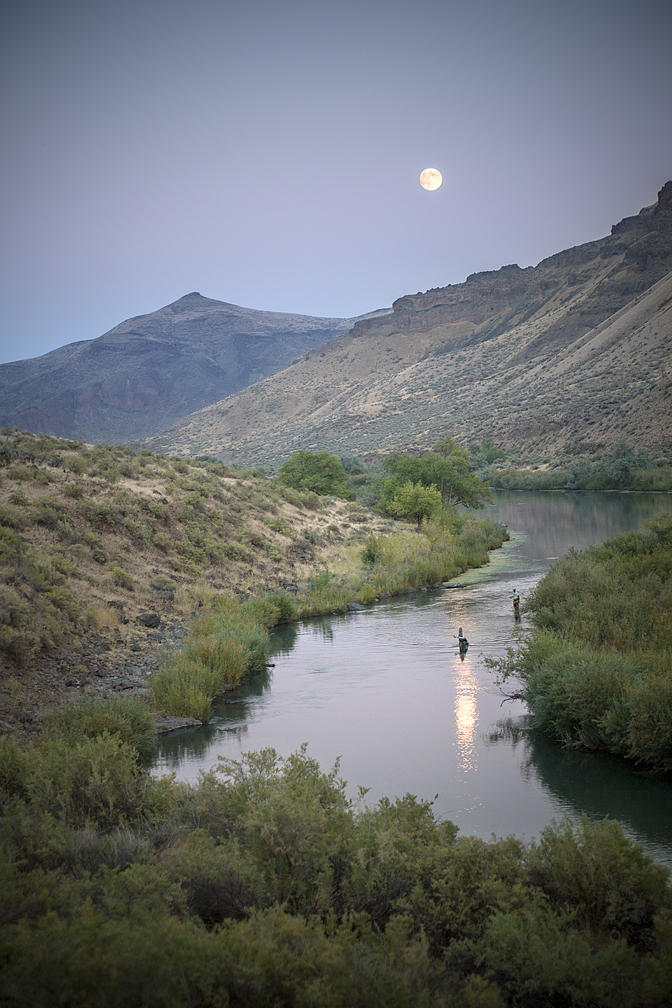 A near-full moon rising over The Owyhee, while Rebecca and Matt get after some rising browns.

September has long passed.  The seven-degree air and new-fallen snow on the boughs of the backyard fir trees seems so far removed from the dry heat of the desert canyons we camped in just a few months ago.  Those canyon-river days are just below the surface, though, and if I close my eyes against the winter scene outside, I can be back there in just a few short moments. 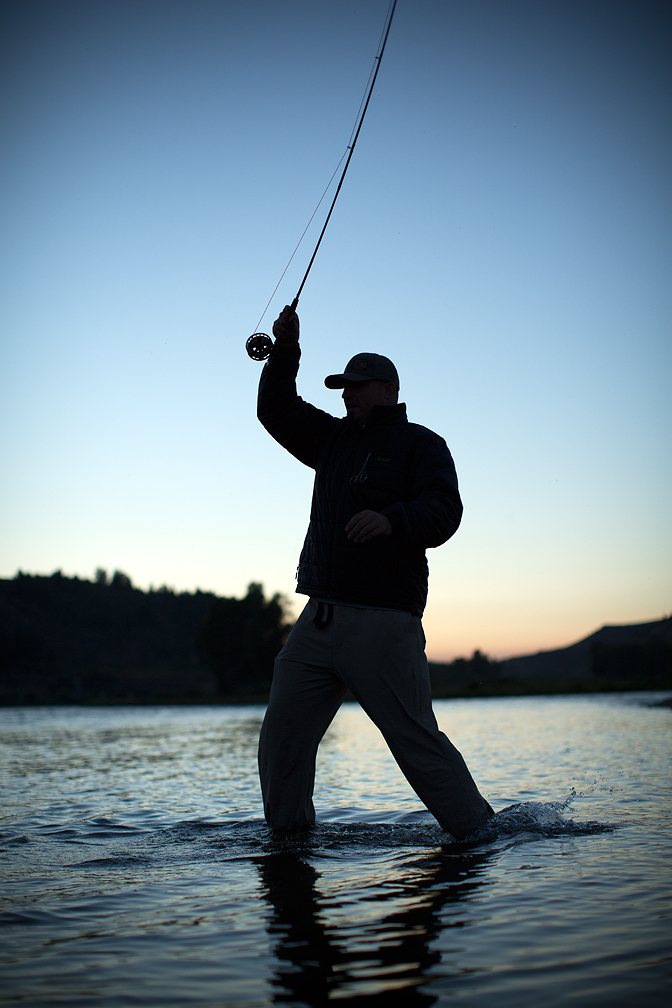 Colby at home on the South Fork one evening, with a moose in the shadows of the riverbank downstream.  This is Idaho.

It has been incredibly interesting and inspiring to witness the evolution of this film project that began taking shape on great trout waters in southeast Oregon in September of 2011.  Not long after our return back home from that first trip out west, came the realization that there was an important story to be told, and after a couple of phone calls between here and Kansas, a few Friday lunch meetings over bacon cheeseburgers and cold beer, Matt Smythe and I suddenly found ourselves flying out to Kansas to get the ball rolling.    We had made the trip to connect and work with the lads from Rockhouse Motion (Matt White and Dustin Lutt.)  In doing so, the heartbeat of A Deliberate Life had begun to thump. 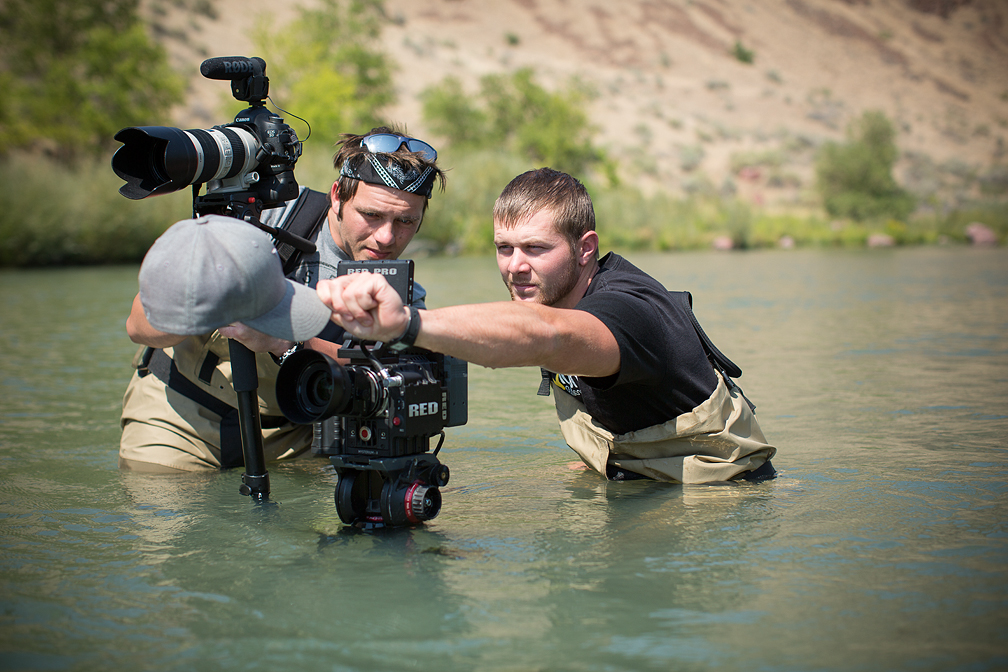 Matt and Dustin, of Rockhouse Motion, conferring while framing up a scene on The Owyhee

The intent of this initial excursion to Kansas was twofold, really.  While a collaboration of this sort had been the topic of discussion for a short while, the four of us were still just getting to know each other, learning how to work together for the first time.  We also needed to create a promotional video that would serve as a statement of intent for the larger film project, and that could aid us in drawing some support and sponsorship to move forward with.  The resulting video was a four-minute piece that was filmed with a RED Epic and Canon DSLR’s, edited and finalized in a little over two days.  Click here to watch the video.  (It was during this trip, also, that Silo4 was formed – the name we’ve given to the collaboration of creative minds responsible for A Deliberate Life, but also one that will continue to live, and be a platform through which Matt and I can tell great stories and create cool stuff with other similarly-minded people.) 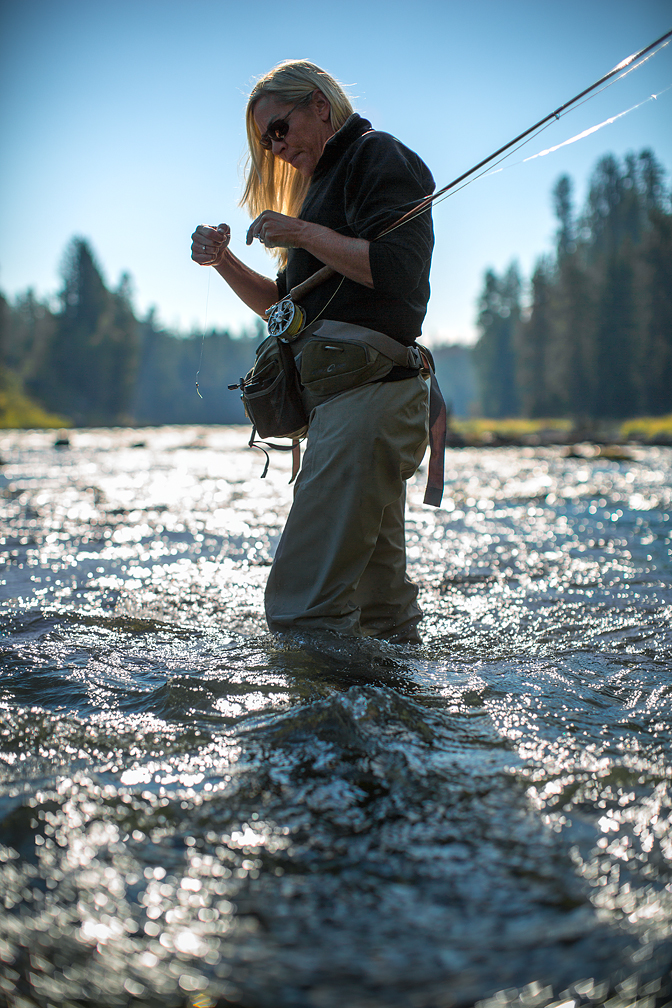 Rebecca on the Henry’s Fork during a morning session.

September 2012 found us heading back to those same waters we had been on twelve months prior.  This time, though we had new friends along, and had a greater purpose – beginning to capture the story and imagery that would eventually become the final film and its trailers.  Matt and I had flown across the country to Boise, Idaho, and were met at the airport by Matt White, Dustin Lutt, and Bryan Keeler, who had made the trip from Kansas and South Dakota, arriving just ahead of us.  From there, we headed into town and connected with our friends, Rebecca Garlock and Robert Nelson, with whom we’d begin our journey.  After gathering up our gear and taking on a few days worth of supplies, we headed west into Oregon. 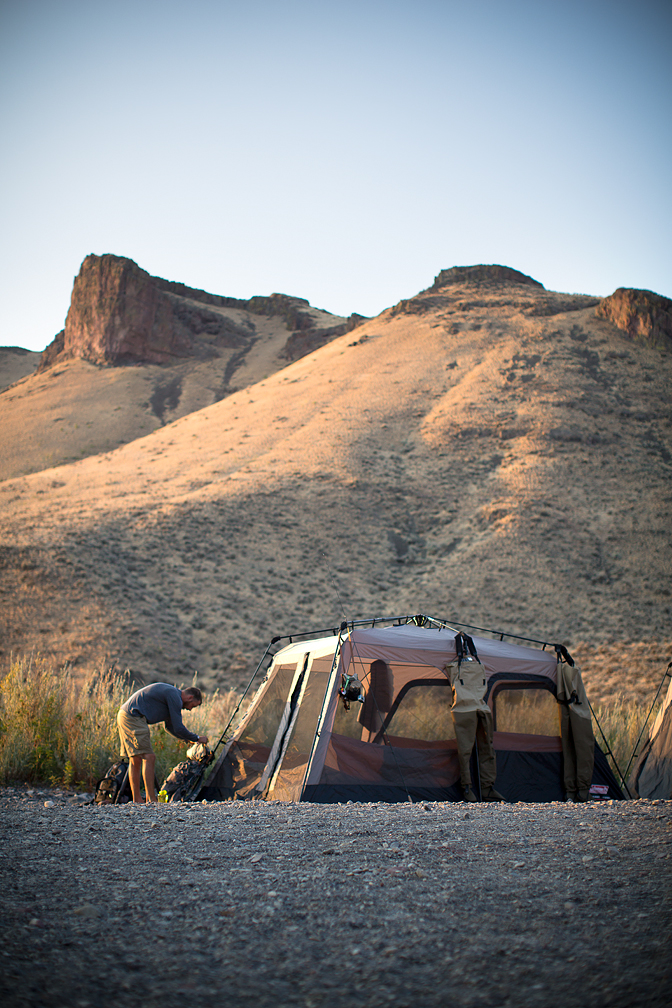 The Coleman 8-Person Instant Tents we were provided with really did set up in one minute, and proved to be perfect shelters for our expedition!.

Robert exhibited great prowess in keeping us all well nourished with his camp-cooking talents.  I think we were all wishing he’d be along for the whole trip.  We had been really nicely outfitted by Coleman Camping Gear, with tents, sleeping bags, folding chairs, headlamps, flashlights, lanterns – enough stuff to very comfortably allow nine people to stay on the rivers and film for ten days time.  I really can’t say enough about what that kind of support meant to our project.  A handful of other important backers had come on board very early on, too.  Kast Gear, Thomas & Thomas, Howler Bros., SmithFly, Rio, Loon Outdoors, Fly Fusion, Brower Moffitt – all pitched-in to a lend a hand in a tremendous show of support for what we were doing.  For all of that, we are so very grateful. 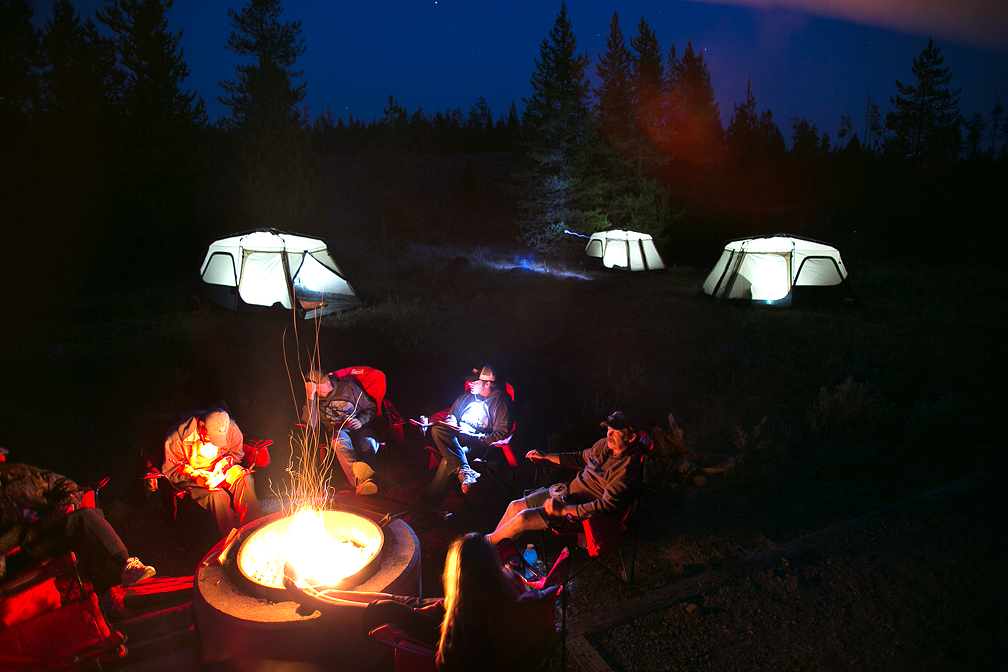 Settled in around a good fire on a chilly night along the Henry’s Fork.  (Each tent is lit with a single pod from a Coleman Quad LED Lantern.)

After a few days of filming in southeast Oregon, on the Owyhee River, we traveled eastward back to Boise for a brief re-charge, and then onward to the Idaho Falls area to continue filming on the South Fork and Henry’s Fork of the Snake River.  Colby Hackbarth and Brent Griffeth, of Kast Gear, were our hosts on the South Fork, and their families greeted our arrival with bear-hugs and a beautiful, Mexican dinner one evening.  As with Rebecca and Ross, Matt and I had fished with Colby during our 2011 trip and had formed a friendship very quickly.  During our few days with Colby and Brent on the South Fork, we set up camp at a site in Caribou National Forest.  Our days on the river each began at one of the boat launches in Swan Valley, Idaho, that were within a short drive and would end around the campfire in the evening.  (Due to a ban on fires during our time in Oregon, we hadn’t been able to enjoy any good campfires until now, and now, in the chilly evenings, we felt fortunate to have them.) 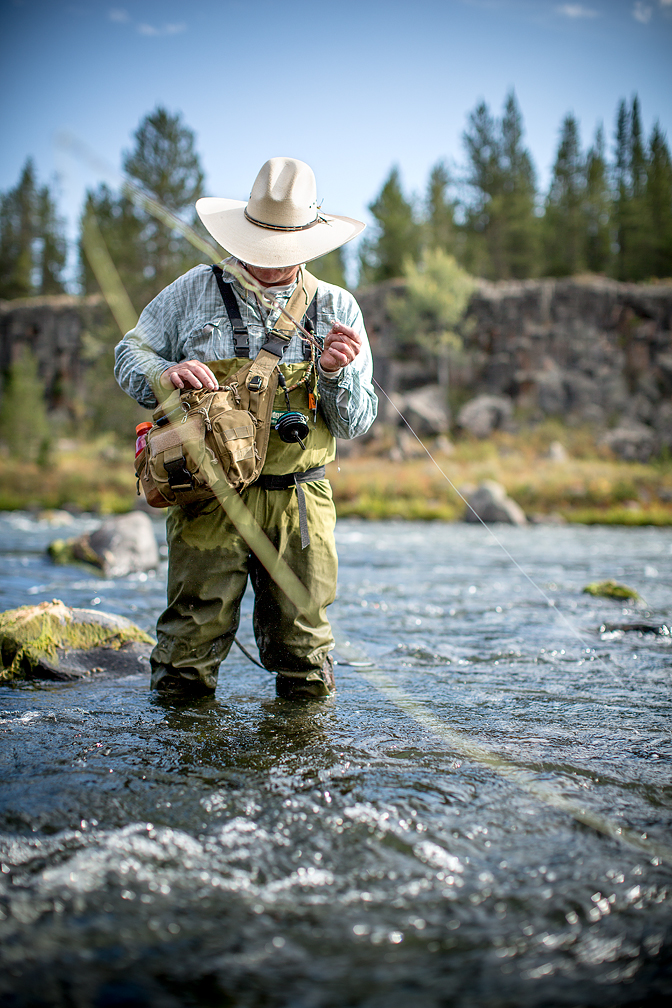 Ross changing flies during a morning on the Henry’s Fork.

The final leg of our trip saw us meeting up with Ross Slayton for a few days on the Henry’s Fork.  Ross was fired up to be back out on his favorite waters with us in tow, and was, once again, a great host to all of us during our time with him.  During our final day together, we took a trip into Yellowstone National Park to check out some of the wildlife and geological wonders before rounding out the day with some fishing on the Firehole and Nez Perce.  It was heartbreaking to only be in a place like that for a day, but I’ve got it marked high on my list of places that need a return trip. 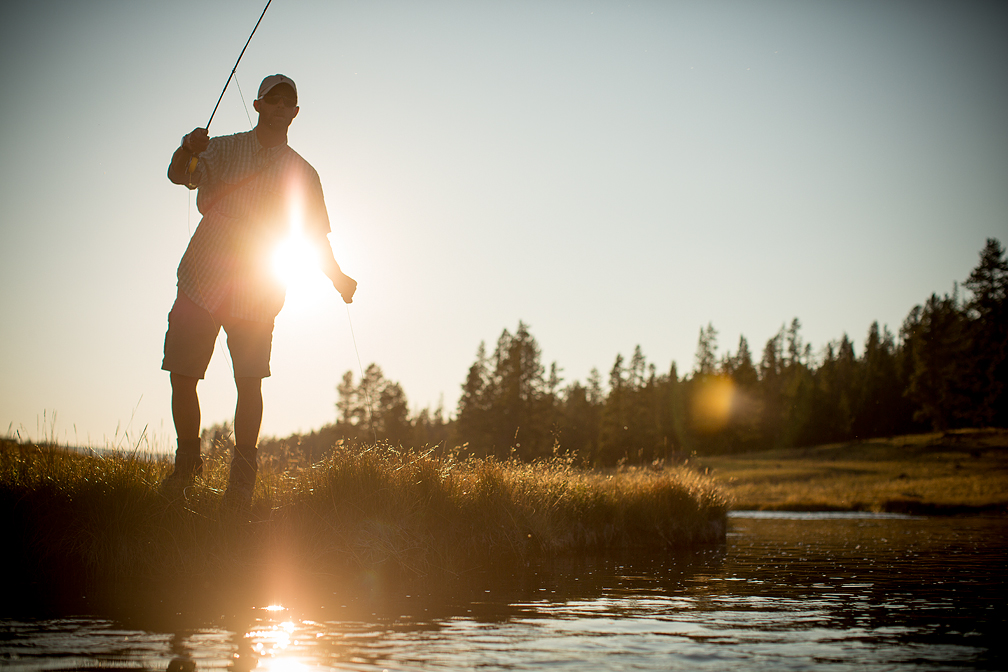 Matt Smythe on the Nez Perce.

The following month, Matt and I made our way back to Kansas to check out the three-minute trailer that Dusty and Whitey had created, spent a couple days laying out the structure of the 18-minute trailer, recording voice-overs and sifting through a mound of audio clips to pull out the key components for the greater story.  Whitey had also connected with a very talented musical artist in Kansas named Tim Coons, who had graciously provided some of his gorgeous pieces for use in the film’s soundtrack.  All of it just fit together so very nicely. 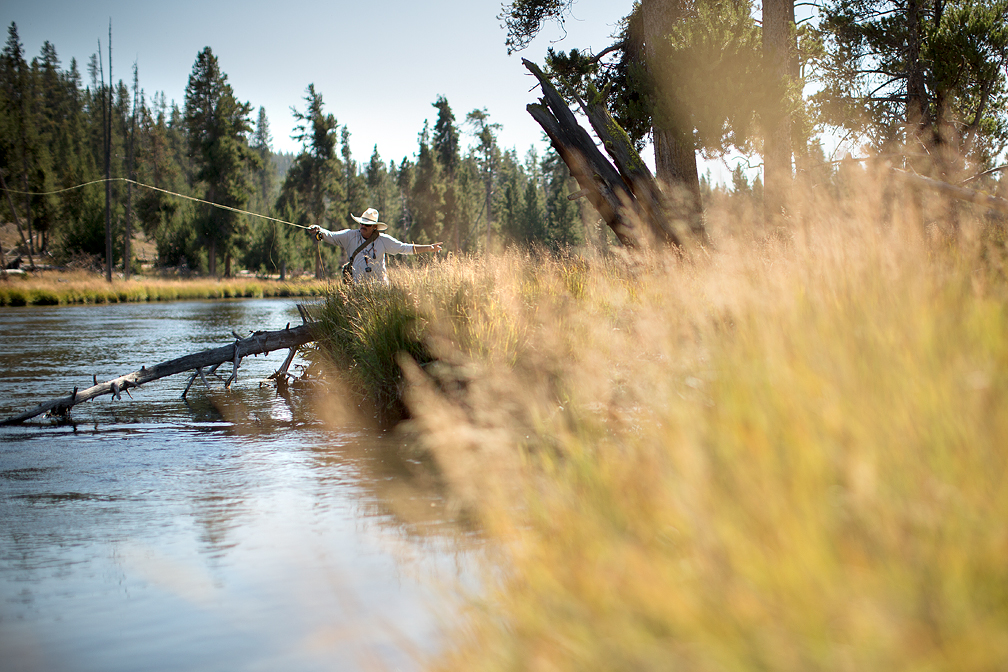 Before we knew it, the film had been invited to be part of the 2013 International Fly Fishing Film Festival, a.k.a IF4, and is now making its way around the U.S. and Canada, with future stops in South America.  The “touring version” of A Deliberate Life is an eighteen-minute, extended length trailer that sits among some very fine company on the festival tour.  The three-minute version of the film trailer can be seen on the Silo4 Vimeo page, here.  Matt Smythe and I had the pleasure of representing Silo4 and attending the film tour kick-off in Denver, Colorado in early January.  We’ve just recently made arrangements to schedule a stop in our “hometown” of Rochester, New York.  The films of the IF4 will hit the screens of Little Theater on May 17.  Tickets for all of the shows along the film tour may be purchased here. 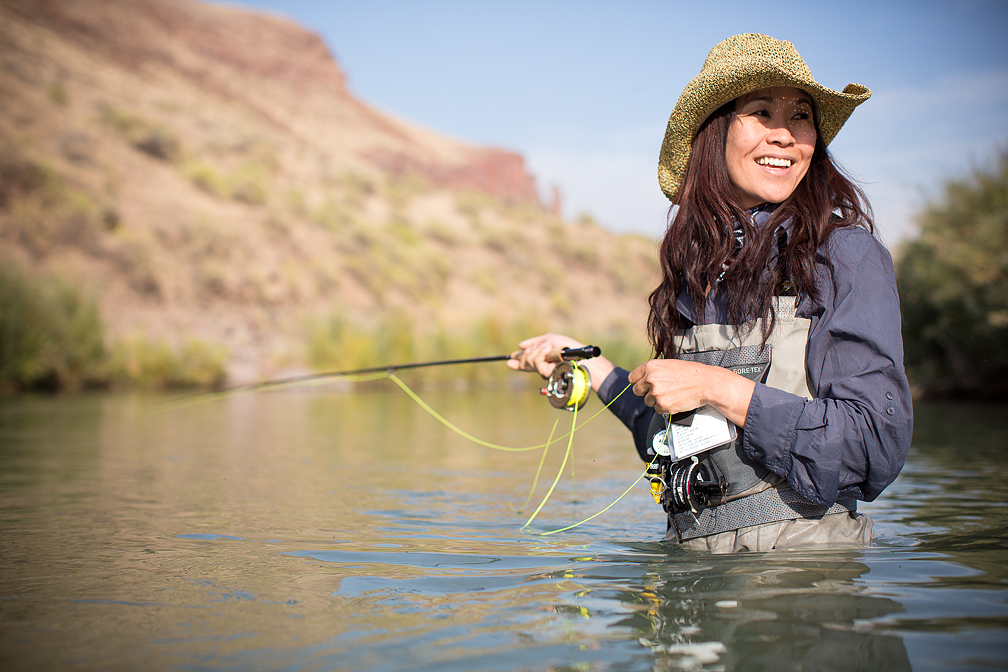 Aileen Nishimura enjoying an early evening on the Owyhee River.

I really need to give a huge holler and thank-you to a small handful of core-group friends who have given of their talents and their time to help Silo4 piece together some missing parts of our thousand-piece puzzle – logos, promotional and press-kits, web sites, movie posters, DVD packaging, so many things that have been made possible because of folks like Tim Winter, T.C. Pellett, and Rebecca Garlock.  Another loud shout needs to be hollered at Luke and Michael Bantam of Dreamcast Idaho, Aileen Nishimura, Rachel Jean Morgan and Brian Forsmann for bringing their wonderful energy to our time together on the Owyhee.  See you all again soon, hopefully! 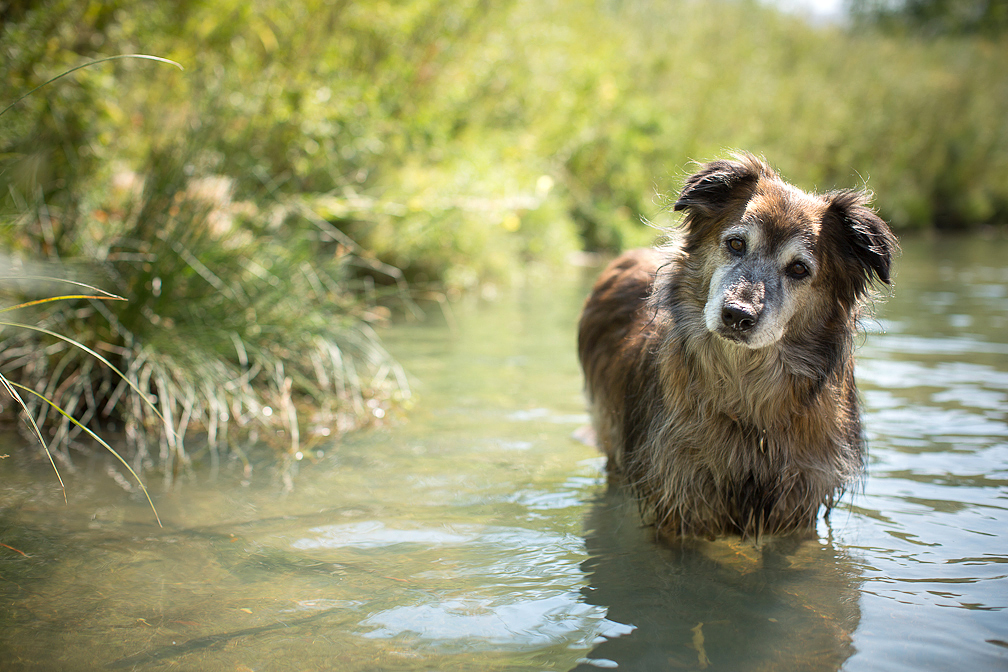 Luke, a good fishin’ pup, from Dreamcast Idaho, cooling off in the Owyhee.

I feel a bit compelled, too, as I sometimes do, to apologize for the sparse nature of this post.  I could share so much more, and hate to sometimes have to condense things into just the basics.  I think that to really tell the whole story of how this whole thing came to be, the energy and emotion that went into creating it, the friendships forged and the territory explored, so much more needs to be said.  For now, though, I think it’s wise to simply let the film trailers and photographs express some of those things on their own.