A Night to Shine 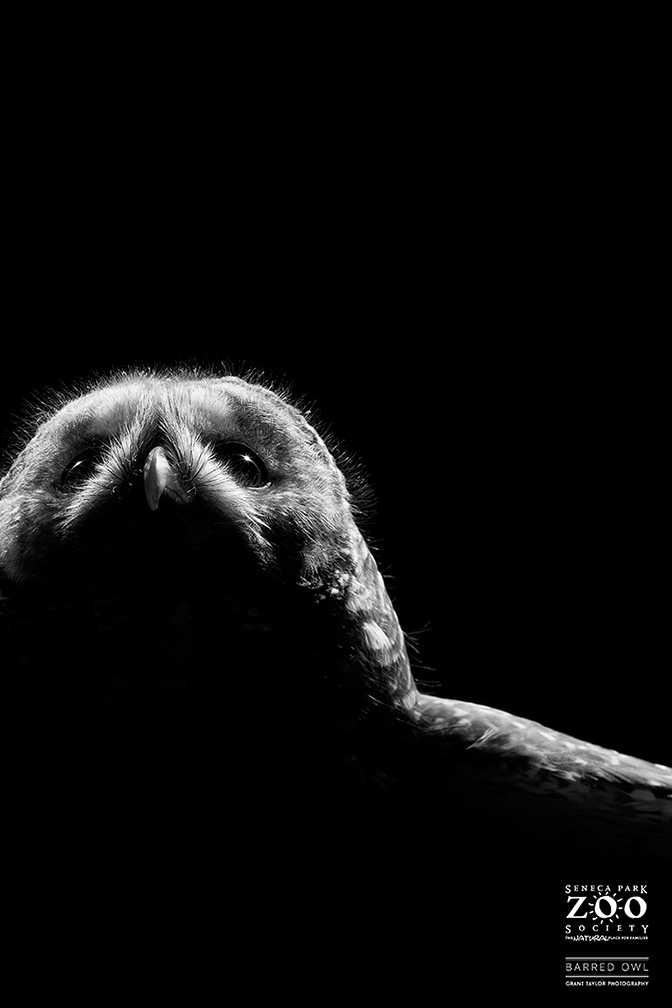 Othello, Seneca Park Zoo’s barred owl, featured on one of the posters in the campaign created for 2014 Zoobilation – A Night to Shine.

Here in my cozy office, on this gray, windy, Sunday afternoon, my heart is full, and I almost feel as though I’m sitting up in my chair a little bit taller than usual.  The reasons for this are many, but for this moment, I’m focused on the events of this past Friday evening.

The 24th Annual RAF Addy Awards event kicked off in typical fashion – on this night, just over five hundred people from the Rochester, New York advertising community attend a gala event, during which awards are given to the very best creative works submitted from the past year.  This is our Academy Awards – our Emmy Awards –  our The Voice.  It’s a highly anticipated, annual event – a fun evening of viewing entries in the gallery area, tossing back cocktails, slugging down hors d’oeuvres, getting warm hugs from friends, catching up with clients, having some laughs, and finding out what this year’s judges thought of the very best of creative work that came out of our town in the past year.

Abe, one of Seneca Park Zoo’s bald eagles, immortalized upon one of the five, eight-foot tall banners that hung outdoors during the summer evening event.

Rachel Spence and I both arrived a little later than we’d hoped, but grabbed drinks at the bar, and fell right into visiting with everyone.  During the short time we had remaining in the cocktail hour, we must have hugged and visited with thirty or forty people, Rachel found that one of her co-workers had worn the same dress as she had, and I had a small hand in helping to extinguish a good friend’s hair when it caught on fire at the bar.  No open-flame candles next year, okay, people?  My hand still smells like burned hair.  So glad no-one was hurt.  Addy Night can be crazy, man.  Believe me.

Marina, a sleek and graceful sea lion, on the face of one of the Zoobilation 2014 event tickets. There were three different tickets in the campaign, and each ticket-type was represented by a different animal.

For the 2015 competition, three hundred fifty-one entries were received, driven to New York City in late January, viewed, and judged by a panel of five creative professionals from that advertising community.  The entries came from Rochester’s advertising agencies, marketing firms, non-profits, printing houses, magazine publishers, web developers, writers, illustrators, graphic designers, cinematographers and photographers.  I had a handful of entries this year, one of which was a series of four photographs created for Seneca Park Zoo Society’s annual fundraising event, Zoobilation.  I had worked on the project with Rachel, and her Roberts Communications co-worker, our friend, Brian Rapp. The work was something we’d done as an independent collaboration, and on a pro-bono basis for the Zoo, on our evenings and weekends the previous winter.  So, in addition to my photography entry, some of the individual elements of the campaign, and also the full campaign – designed by Rachel and written by Brian, had been entered into the appropriate categories.  One was for the banner series, another for the poster series, and then, the full-campaign that included everything from an invite to the kick-off event, posters, banners, wine bottle labels, event tickets and note cards.  I’m probably forgetting something, but you get the idea. 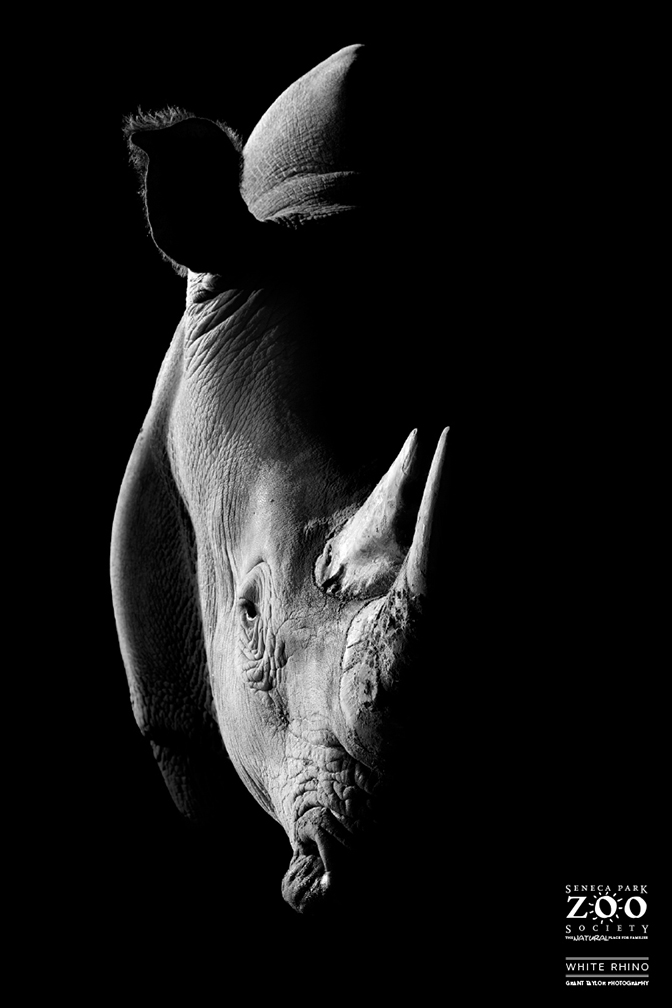 Bill, the zoo’s rhinosceros, featured on one of the campaign’s six posters.

Well, early-on in the award ceremony, and in-between the laughs and chuckles elicited by the on-stage banter of the presenters, we were called upon to make the walk to the stage and be presented with a Silver Addy for the banner campaign.  More hugs, some handshakes, photos snapped with the trophy, and hushed congratulations from friends as we made our way back to our table.  We were excited!  It felt great! 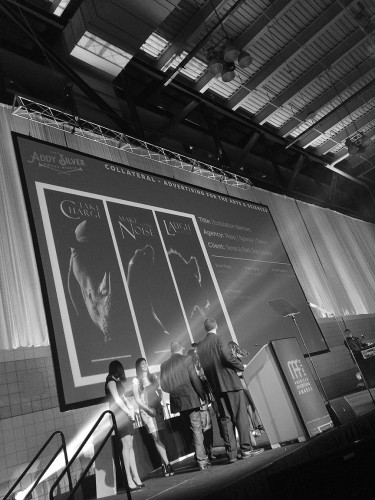 On the event stage, receiving the Silver Addy for the Zoobilation 2014 banner series that was a component of the whole campaign. Photo by T.C. Pellett

Back at the table, I was going through my usual post-award process, while trying to still pay attention to the awards being presented, and applauding for each of the winners.  See, my folks back in Vermont always want me to shoot them a text if I’m fortunate enough to have received any awards during the evening, so I was doing that, and also letting our client, Michelle, in on the great news.  I could tell that Rachel was very pleased, and Brian, too.  That made me happy, too.  It’s a little difficult to remember all the details, but after awards were given to winners in a  few other categories, we were called back up to be awarded a Gold Addy for the poster campaign, and before we made it to the far end of the stage, the presenters were calling us back to hand us another Gold Addy for the full-campaign.  Whoa! 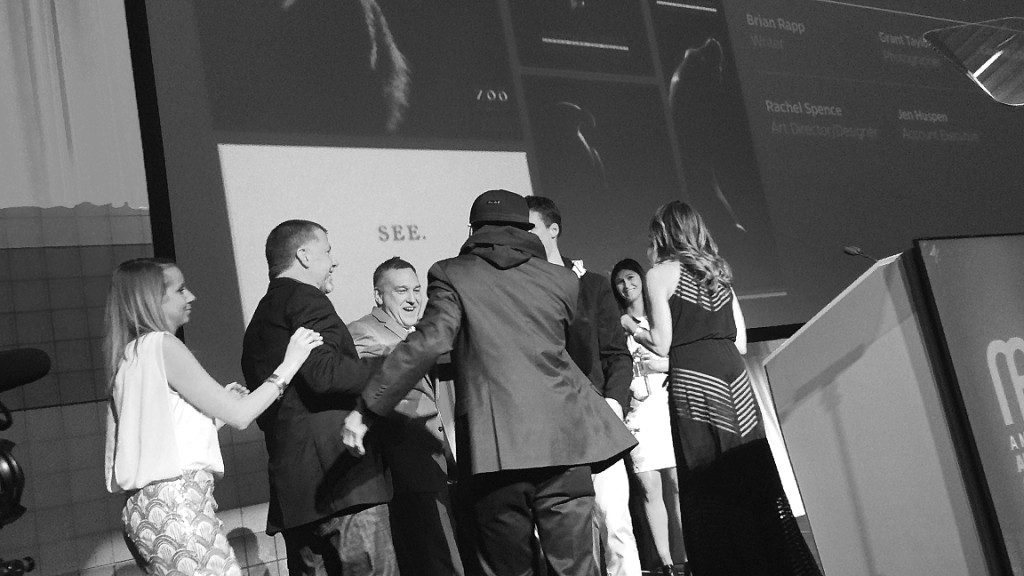 We were so excited and happy.  Man, I could hardly believe it!  I was getting warm in my jacket, though, and pretty thirsty by that point.  Brian and I headed to the bar to grab a few bottles of water and a new drink, while Rachel headed back to the table with the freshly-acquired hardware.  When I sat next to her, I leaned over, gave her a kiss on the cheek, and said something to the effect of, “If nothing else happens tonight, I’ll still go home very happy.”  See, the categories for photography – Elements of Advertising, usually came toward the end of the evening, and even though it’s a beautifully put-together event, and I so enjoy seeing friends and colleagues receive awards for their awesome work, it sometimes seems like a long wait to see whether any of my photography entries had received any love. 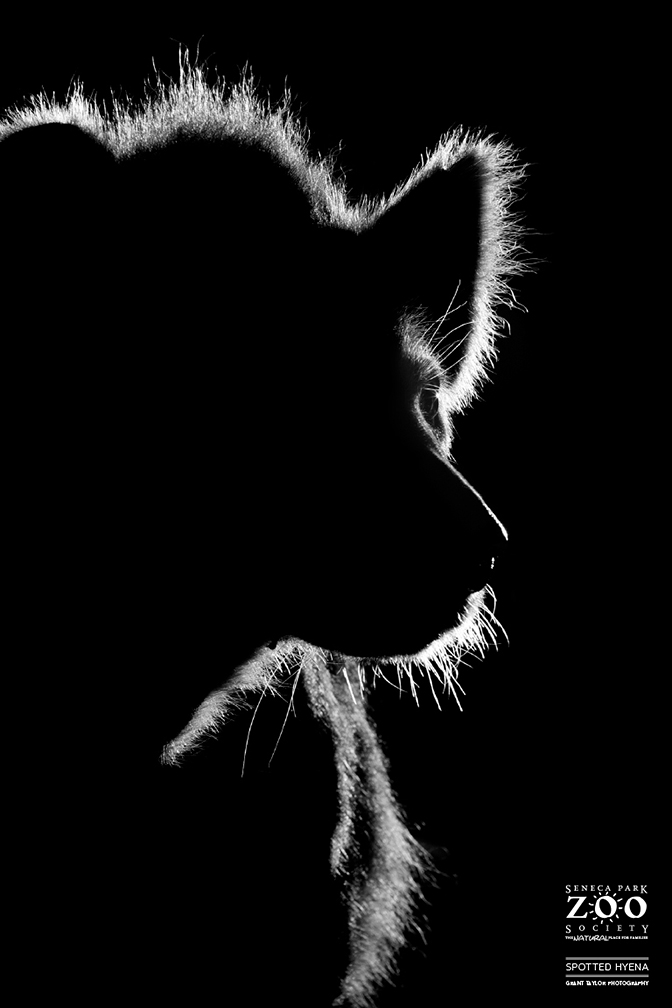 Lou, the lone hyena of Seneca Park Zoo, certainly one of the most wonderful of beasts we were fortunate enough to work with!

Our project had some really, really nice momentum going at that point.  I think that Rachel recognized that, too.  She smiled and winked at me once, then leaned over toward me and whispered, jokingly, “Oh, my gosh – what if we won Best of Show?”  I looked at her like she was crazy.  I shook my head.  “No way, Babes.  There’s so much strong work here.  Are you kidding me?  There’s just no way.  Us?  No.”  Still, somewhere in the back of my mind, I wondered.  Is it possible?  Ahh, no way.  Don’t even think about getting your hopes up for something like that.

I was so very happy with the recognition our project had received at that point, and was even further thrilled when I was awarded a Gold Addy for my entry of the Zoobilation work in the black-and-white photography category.  Awesome!  Really was having the best Addy Night ever.  For one project I’d worked on to have gained so much recognition was pretty astounding.  I’d never quite had that happen before, to this level.  It felt absolutely fantastic.

Then, at the end of the night, it happened.

Best of Show?  I was aware of the applause.  I was aware of someone behind me patting my shoulder.  I was aware that Rachel and Brian had already stood up from their chairs.  I was aware that I had tears forming in my eyes.  I don’t know why, but I did.  And, I was aware that I couldn’t move or breathe.  Stunned.  Floored.  I guess, after a moment, I stood, but I don’t really remember doing that.  Kiss and a hard hug from Rachel, and we were on our way to the stage.  I was in such a state of disbelief, but there we were.  On the huge screen behind the stage, a video was being projected of the five judges, talking about our project.  My mind was spinning some, though, and I wasn’t really very focused on what was being said.  Then, when it was time, we walked up the steps to the stage, and into the open arms of two of our very good friends who were the award presenters, and the previous year’s Best of Show winners. 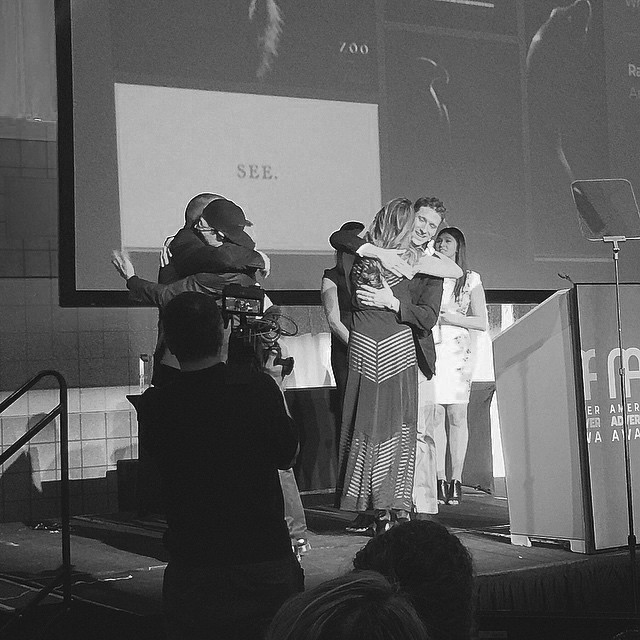 Betsy Traub captured things just perfectly in this photograph of Rachel and I getting our congratulatory hugs from Greg Shainman and Tim Winter.

Proud, overwhelmed, floored, thrilled.  With some disbelief thrown in for good measure.  It’s a crazy roller-coaster of feelings when stuff like this happens to you.  At least that’s how it was for me.  How it still is, I guess.  Even a couple days afterward.  But so incredibly cool.  So now, the three of us, by having been awarded with this tremendous honor, have also been saddled with the monstrous task of producing next year’s RAF Addy Awards ceremony.  We’ve got some tough acts to follow, and some big shoes to fill, but looking around and knowing the group of phenomenal, insanely talented friends and colleagues whom we’ll surely be calling upon for help, gives me a tremendous amount of confidence.  But – holy smokes.

Rachel, Brian and I would like to give an enormous, heartfelt “Thank you!” to so many people for providing us with this incredible opportunity, and for giving our work the overwhelmingly beautiful recognition that it has received.  To the Rochester Advertising Federation, the dozens of people who give of their time and creativity to make the Addy Awards event happen, the five judges in New York who noticed our work, and everyone who was there on our huge night to offer their congratulations, hugs, handshakes, back-slaps and nods of approval.  The many, early Saturday morning texts and Facebook posts that we each received were so greatly appreciated.  We owe a great deal also, to our dynamite client, Michelle Picardo, who believed in us and trusted us completely, the zookeepers that stayed late into the challenging November and December evenings last year, and slugged it out in the cold and mud alongside us, tossing chunks of raw deer meat and frozen mackerel in just the right places. 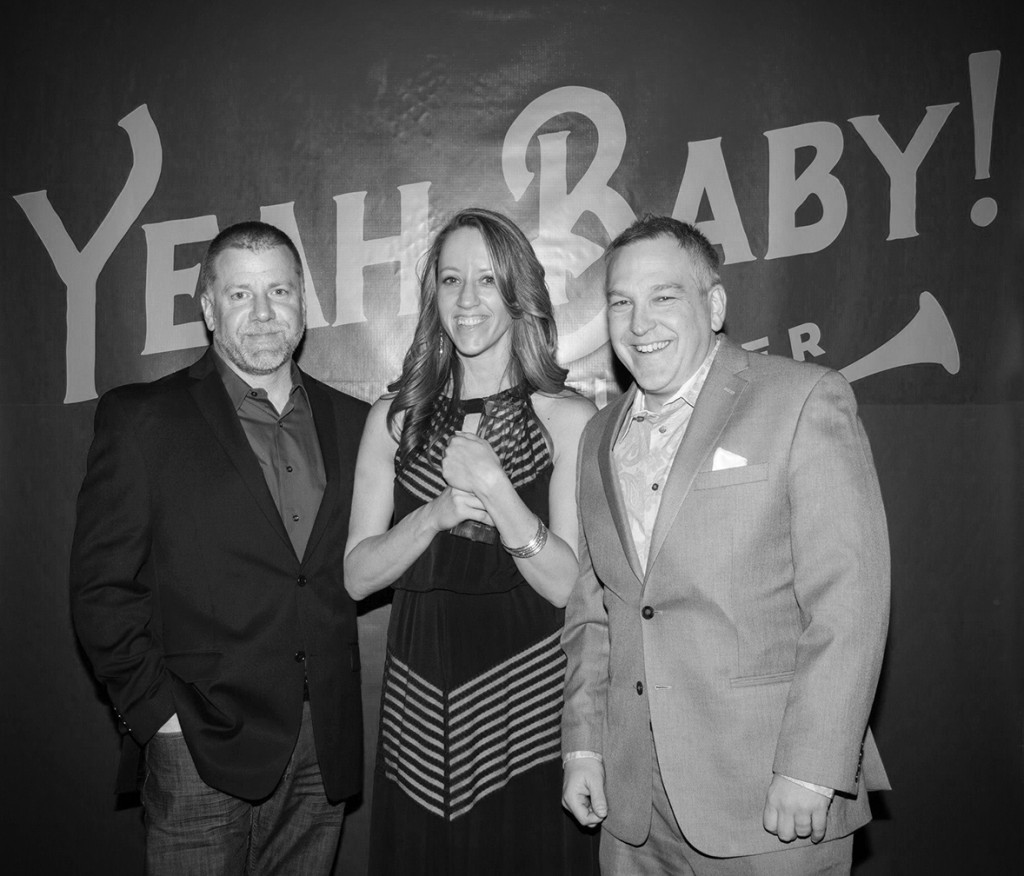 (L to R) Myself, Rachel and Brian with the (very tightly clutched,) RAF Best of Show Addy trophy. Rachel’s not letting go of this trophy for anything! Photograph courtesy of Rochester Advertising Federation.

The love and support we’ve been shown in the past 48 hours has been absolutely overwhelming and humbling.  There is so much incredible talent in this town, and to be standing where we are at the moment just blows my mind.  It’s not a place that I had ever imagined I’d be.  The three of us are so very appreciative of every little minute of this thing.  Thank you, thank you, thank you. 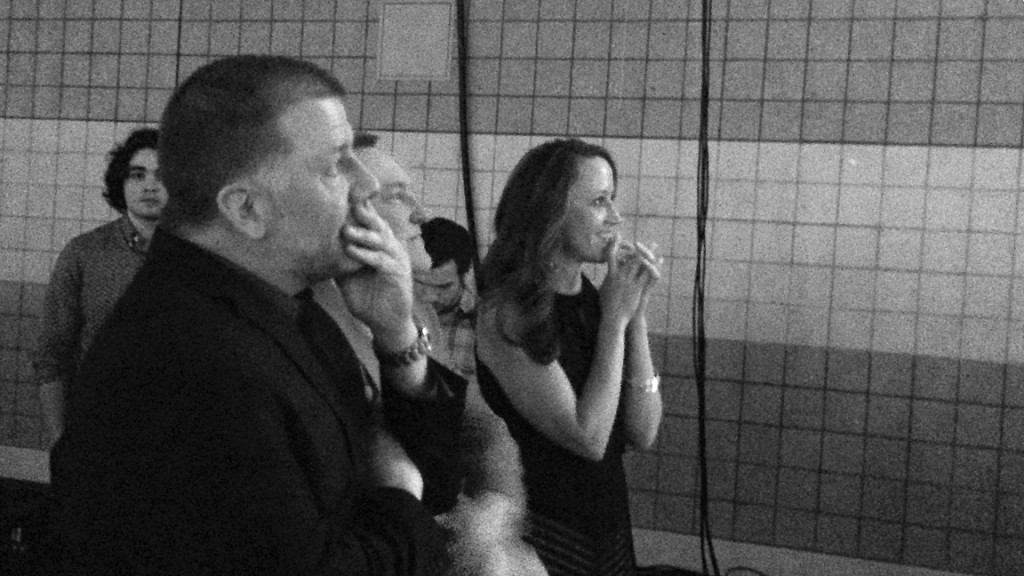 Update 2 – April 16, 2015:  The 2014 Zoobilation – A Night to Shine photography campaign was one of 157 projects selected by a panel of five judges, from a total of 4,421 entries, to be published in the upcoming July/August Communication Arts Photography Annual, as one of 37 projects published in the Advertising category.  So stoked!

Update 2 – May 11, 2015: The run continues!  Notification of further honors came this morning by e-mail, informing me that the photography series created for Zoobilation 2014 has snagged a AAF National Addy Award!  The AAF will announce whether the award is Gold or Silver, at the June 13 evening gala in Las Vegas.  Fingers crossed!

If you’d like to go and grab a coffee, come back, and read a little bit more about the Zoobilation project, please just click right here.