This post has been inspired by the numerous text messages, e-mails, and social media PM’s from friends of mine wanting to see the trophy that was collected on Saturday night in Las Vegas, NV.  Super-sorry to have to disappoint you.

But, I can tell you what happened.  And what it felt like.

Coming home empty-handed from Las Vegas is not an uncommon occurrence.  It’s probably fair to say that it happens to most of us.  It happens to the best of us.  You gotta expect it, almost.  Even if you’re relatively lucky.  That’s just the chance you take. You shake your dice, give ’em a kiss for good luck, and let ’em roll.  Sometimes it plays out in your favor, and most of the time, it just doesn’t.  Still, you’ve had a beautifully fun time giving it a shot.  Hopefully.

In this case, though, coming home empty-handed was not what I expected.  Not even remotely.  Hadn’t even crossed my mind.  This was supposed to have been a sure thing.  Kind of makes me chuckle.  A little.  Ahhhhhh, Vegas.

A little over a month ago, I had received an e-mail from the American Advertising Federation (AAF,) stating that a photography series I had created last year for Seneca Park Zoo Society‘s big fundraising gala, Zoobilation 2014, had been selected from a massive field of entries, to receive an AAF National American Advertising Award.  Sweet! Unbelievable!  Awesome!  (They don’t tell you, see, whether it’s a Gold or Silver Award.)  That would be revealed at the June 13 awards ceremony, held at Caesar’s Palace in Las Vegas.  So, long story short, before I know it, I’m on a plane bound for Sin City, and looking forward to meeting up with my good buddy, Joe Mayernik, whom had flown out the previous day to attend #Admerica15 and tend to his duties as one of the members of the National Advertising Awards Committee.

The view of the neighbor’s place, The Bellagio, from our room on the 38th floor of Caesar’s Palace.

The work for Zoobilation 2014 – A Night to Shine had been done in collaboration with art director, Rachel Spence, who developed the concept and theme for the entire campaign, and writer, Brian Rapp, who provided the headlines and copy.  Both Rachel and Brian are key players at Roberts Communications in Rochester, NY.  Rachel had given me a really good, strong idea and direction to follow with the photography, and though we struggled a bit with creating the images at times, it all came together nicely in the end.  It really didn’t feel right to me that I was heading to Vegas on my own to receive the Addy Award.  The project had been a big team effort all along. 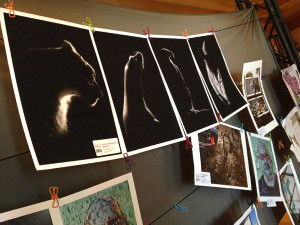 The Zoobilation 2014 photography campaign, as it hangs outside the Palace Ballroom, among the other winning entries.

Poor Joe hadn’t been very lucky on his outbound journey.  Thunderstorms and other difficulties created enough of a mess that day, that he wound up having to sleep in the terminal at O’Hare that night, and get out to Vegas early the next morning. Along with Joe’s National Awards Committee responsibilities, he was part of a panel of judges that would be analyzing entries in a student competition for public-service announcements.  One little kicker – Joe’s luggage didn’t arrive with him.  So, off to Caesar’s he goes, rolls into the judging, probably a bit disheveled and not-so-fresh – Hours before he’s able to even check into our room and wash the Terminal 1 grime off his face.  Ugh. 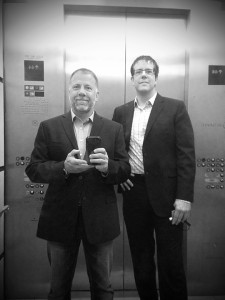 Heading down from the 38th floor to the Casino level on our way to the big event.  Yeah, the guys watching the elevator security cameras probably got a chuckle out of this.  That, or they’re just numb to it all by now.

As soon as my flight was wheels-down on the runway, I had a series of texts from him, describing the situation, and any chance I might see if I could get his luggage before leaving the airport.  He’d sent along photos of himself holding his baggage-claim tags, so once I had my own checked-bag in hand, I made it back through the sea of carousels in Terminal 1, went outside and hopped a shuttle to Terminal 3, where his bags were hopefully sitting in the United Airlines office.  Little bit of sweet-talkin’, and show the attendant the picture Joe had sent, and next thing I know, the very nice woman from United was helping me load the bags onto a luggage cart, for ease of transportation.  Sweet!  I responded to Joe’s earlier string of text messages with a picture of our bags all piled up together on that cart.  Needless to say, he was very, very happy about that.

Winning an AAF National American Advertising Award is, to me, quite a tremendous honor.  It means that work that you’ve created during the previous year has been judged (in this case by a panel of creative, heavy-hitters in NYC,) and has won an Addy Award at the local (Rochester, NY) level, among a very strong field of entries, which then makes it eligible to be forwarded to the regional level, (AAF District 2,) to be judged again by a second group of people, and if an award is won there, the work can then move on to the AAF Nationals for another judging.  This year, in March, our Zoobilation 2014 project had an incredibly overwhelming evening of recognition at our own 2015 RAF Advertising Awards – Winners, and had gone on to claim a Gold AAF Addy and two Silver AAF Addy Awards at the District 2 competition.

The gathering in the Palace Ballroom at Caesar’s Palace on Saturday night, for the 2015 AAF National Addy Awards ceremony.

Sitting in the Palace Ballroom at Caesar’s on Saturday night, at the awards show, I had mixed feelings.  Oh, I was so thrilled to be there, and especially to know that our work had been recognized at that level!  It’s a very different vibe, though, from our own local awards gala.  I suppose that most of it is that when you’re on your home turf, you’re in a room of 400 or 500 people, most of whom are friends and acquaintances.  You’re pulling for each other.  It’s so much fun, and there’s such great energy coming from that group of people, and they’re celebrating right along with you.  On Saturday night, I was sitting there alongside Joe, and a handful of friends that he’d introduced me to on Thursday evening.  The whole thing was, surprisingly, pretty low-key.  I was trying hard not to get my hopes up that my award might be a Gold one.  That’s not the easiest thing to do.  Still, there’s a chance.  Hey – we’re in Vegas, after all, and the night is young.

It was either in the second or third block (I honestly can’t remember which,) of the Gold Addy presentations that the Zoobilation 2014 photography was projected on the big screen above the stage.  Holy smokes!  I could hardly believe it! Again!  It stirs up the emotions inside every time.  I got a little choked up.  Joe and my new friends were hooting and cheering loudly, while scattered golf-claps emanated from across the room.  I think I was just sitting there, taking it all in and shaking my head in disbelief.  Again!  Felt pretty fantastic!  (Golf-claps fade out.) 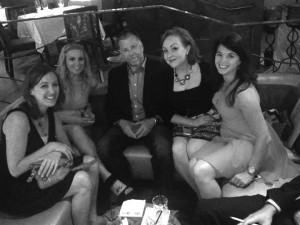 Celebrating at Mesa Grill on the Casino level of Caesar’s. (l to r,) Liza, Nicole, me, Adrienne, and Jenn. (Not seen here – Matt and Joe. Sorry, guys.)

When the time came to make the walk to the stage and be presented with the trophy, I rose, buttoned my jacket, and made my way past the awkwardly-retracted legs of Joe, (who has long ones,) Adrienne, Matt, Jenn, and Liza.  Now, walk yourself up there, and don’t trip on the carpet in front of all these people.  Up the steps to the stage, and a firm handshake from Mr. James Datri, AAF President and CEO, who said to me, “Hey, nice to see you again this evening,” (we had taken the same elevator to the Casino floor earlier,) and then, the trophy was handed to me.  Turn this way, please, pose for a photograph with James, another handshake and a “Thank you so much, Sir!” and back down the stairs and toward my seat among the crowd.

“Grant.”  “Grant!”  “GRANT!”  Someone behind me was calling my name.  I turned around to see one of the women from AAF beckoning me back toward the stage.  “I need to get that trophy back from you, please.  We’ll send yours to you in a couple weeks.  Okay?  Thank you very much.”

More golf-claps from around the room.

Unfortunately, in the excitement of the evening itself, I wasn’t able to – well, none of the winners were able to snap a picture of their award and get it into their social media feed amid hashtags for the event and the host organizations involved.  We didn’t get to clunk that sucker down emphatically onto the bar at Mesa Grill before ordering a round of fifteen-dollar margaritas at the end of the night.  We didn’t get to see if a Gold National Addy Award would get us into the High-Rollers room at Bellagio.  I just sat there in my seat and watched the other winners accept their awards, only to be very politely relieved of them a moment later.  I don’t know how I hadn’t noticed the process earlier on.  From what I could gather, two trophies must have been in play all night long, presumably – repeatedly shined-up backstage with a soft cloth, and handed off to the woman that brought them out to James for recycling to the next winner.  Oh, well.  I didn’t have that much room in my luggage, anyhow.

So, for now, all I can provide is an FPO.  (In our industry lingo, that’s “For Position Only.”)  A low-resolution, un-retouched placeholder that we can work with until the real thing shows up.  Have a look at this for a minute go ahead and click the picture to enlarge it.  If you squint your eyes a little, THAT’s kinda what it looked like.  Pick up a foot-long piece of pressure-treated 4×4 wood post.  That’s about what it felt like.  Up on that stage on Saturday night, though, it felt like that, but better!  The lower three-quarters or so is brushed, gold-anodized aluminum, and the top quarter is a gleaming cube of etched lucite.  Man, the thing had some real heft to it, too!  Solid!  It was a gorgeous trophy to see, and it felt great to hold. Even if it was only for a moment or two. 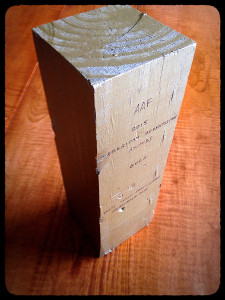 The FPO 2015 American Advertising Gold Award. This will be in a place of honor on a shelf in my office, until the real thing arrives in the mail.

We still had our margaritas at Mesa Grill.

Vegas was really, really good to us, but man, it sure feels great to be home.