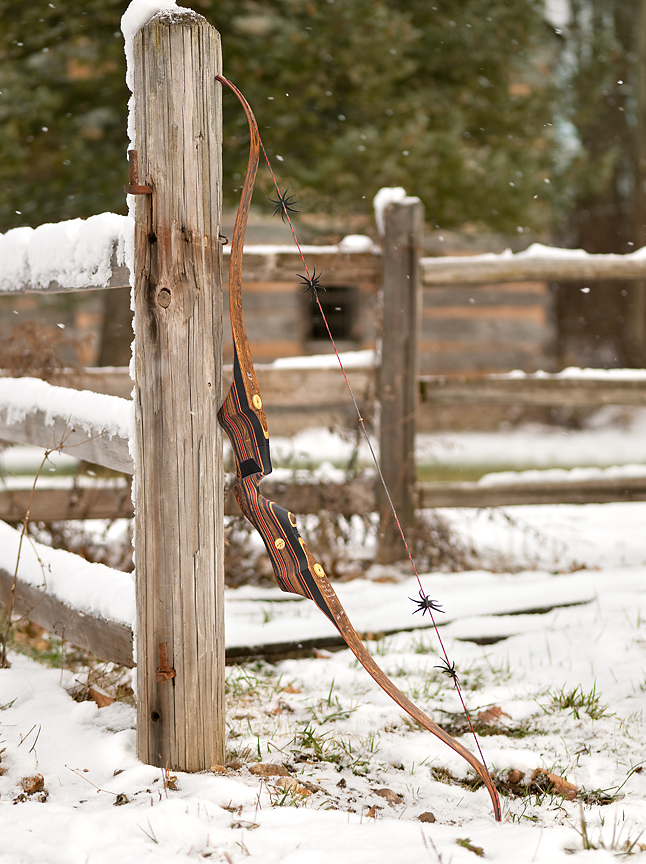 Last October and November, in the heart of the New York State deer hunting season, not only did I find myself pursuing whitetails with archery and muzzleloader gear, but also carving time from several of those days to create some fresh product photography for the Black Widow Custom Bows 2011 Product Catalog.  Based in Nixa, Missouri, this company produces some of the very finest traditional archery equipment that can be had. 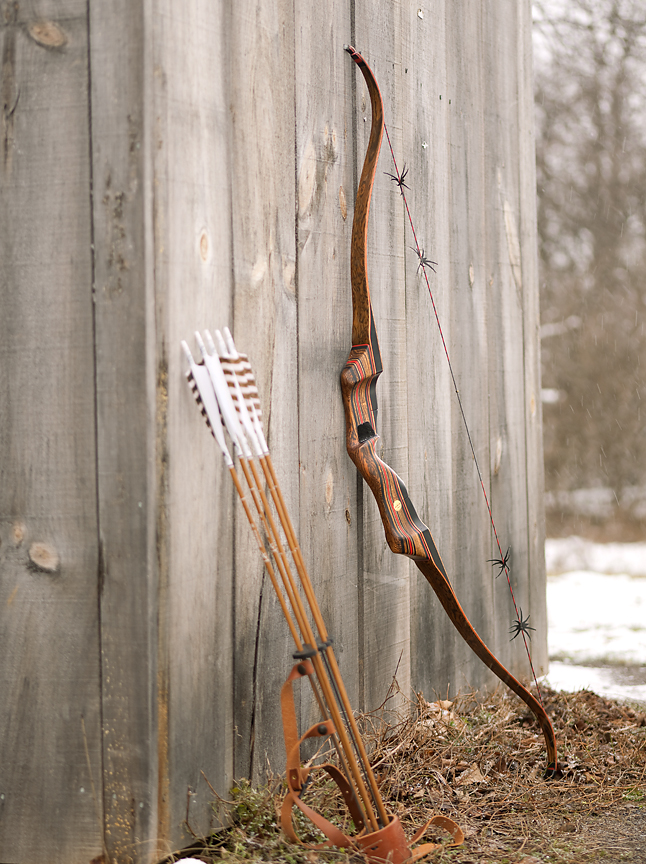 The PSA-X, Bocote, a take-down recurve, in an optional environment.

Black Widow has been around since 1957, when the Wilson brothers began to build recurve bows for a growing list of customers who coveted high quality archery equipment.  The company has evolved through a few phases over the years, and now lies in the very capable hands of Roger Fulton, Toby Essick, and John Clayman.  I had the fortunate opportunity to meet these people in May of 2009, when I attended the Instinctive Shooting Clinic, held at their facility in Missouri.  These are the sort of folks that make you feel very welcome and comfortable right away, and are amazingly eager to share their knowledge and passion for traditional archery.  Everyone that I met at Black Widow seemed to fit this description.  It struck me as a very unique and special organization of like-minded people.  They’re very passionate about what they do, and the products they create, and it really shows. Being among them, even for a short time, was a truly great experience. 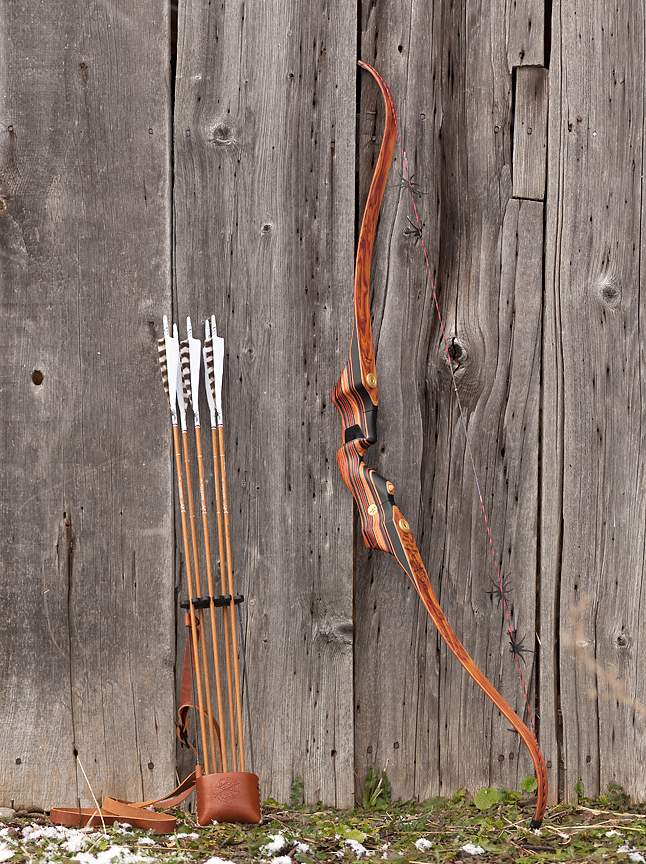 To the eyes of this photographer and archer, the Black Widow bow is an incredibly beautiful thing to behold.  They are wonderfully functional works of art.  They are designed to shoot accurately, and they are designed to hunt.  Furthermore, they are just plain gorgeous!  Layer upon layer of wood, bamboo, fiberglass and phenolic are painstakingly glued-up to form the backbone of each bow.  The muscle of the bow, though, lies in its limbs, which are also built from glass, bamboo and wood veneers.  While the “standard” Autumn Oak, Graybark and Ironwood bows are just dynamite to look at and a dream to shoot, one can have their bow built with a truly “custom” touch by ordering an “X” model, that incorporates the exotic wood of the customer’s choice.  Other accessories and cosmetic embellishments can be had to make a bow truly unique and personalized. 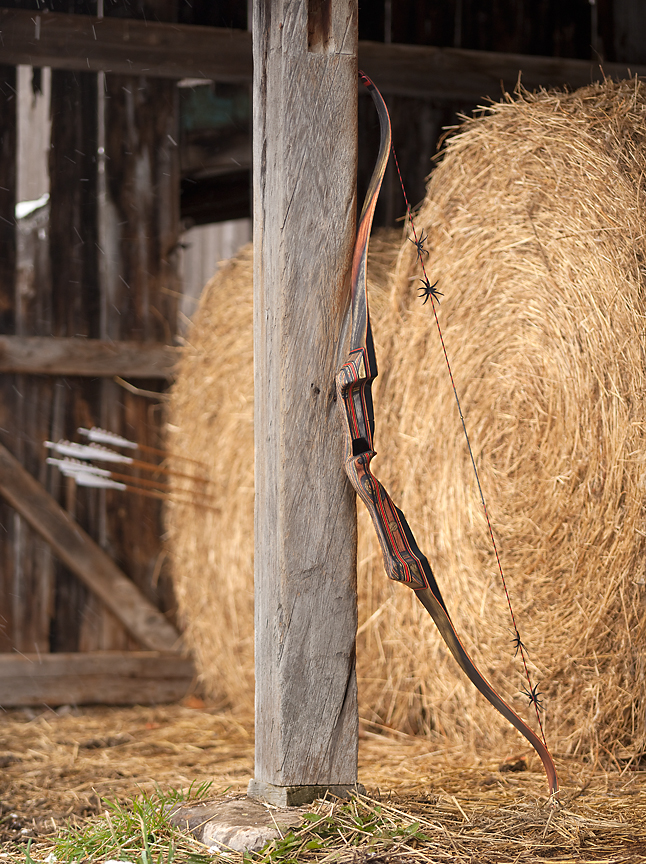 Overseen by Master Bowyer, Toby Essick, the recurves and longbows that Black Widow produces achieve a perfect blend of science and art, of functionality and aesthetic.  They are sexy, graceful and powerful, and just plain fun to shoot!  They are breathtaking.  Their construction is the result of years and years of experience, and maintains a balance of fine hand-crafting and computer-controlled machining. 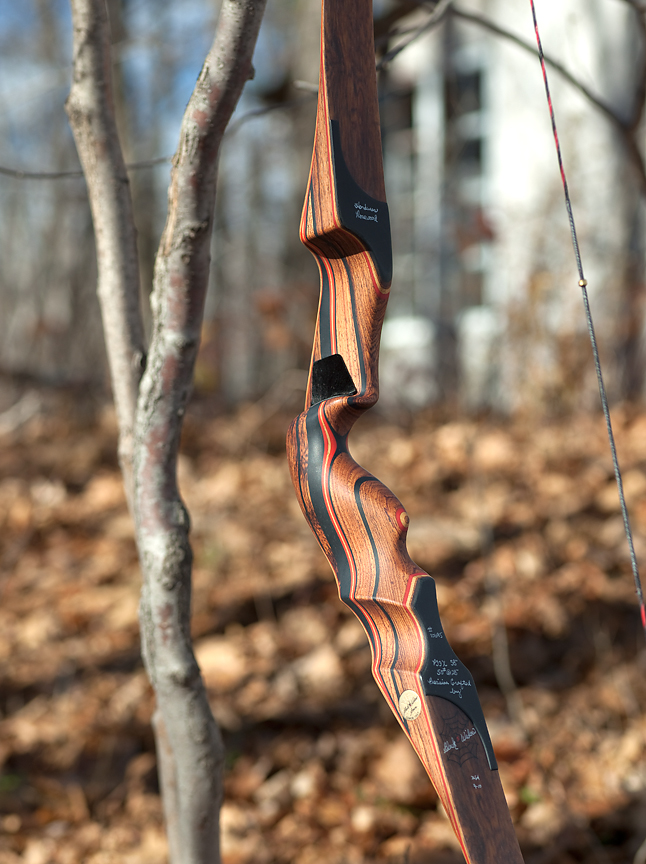 Detail of a one-piece recurve, the PTF-X, in Honduran Rosewood.

The photographs made during this project were created in Mumford and Canandaigua, New York and also in Washington, Vermont.  Because part of the photography was done through the late part of the season, I was able to get some shots of the bows the bows in a slightly snowy environment.  That, to me, seemed fitting for the catalog’s January release.  The falling snow was not something that would have been too likely in southwest Missouri, even at that time of year. 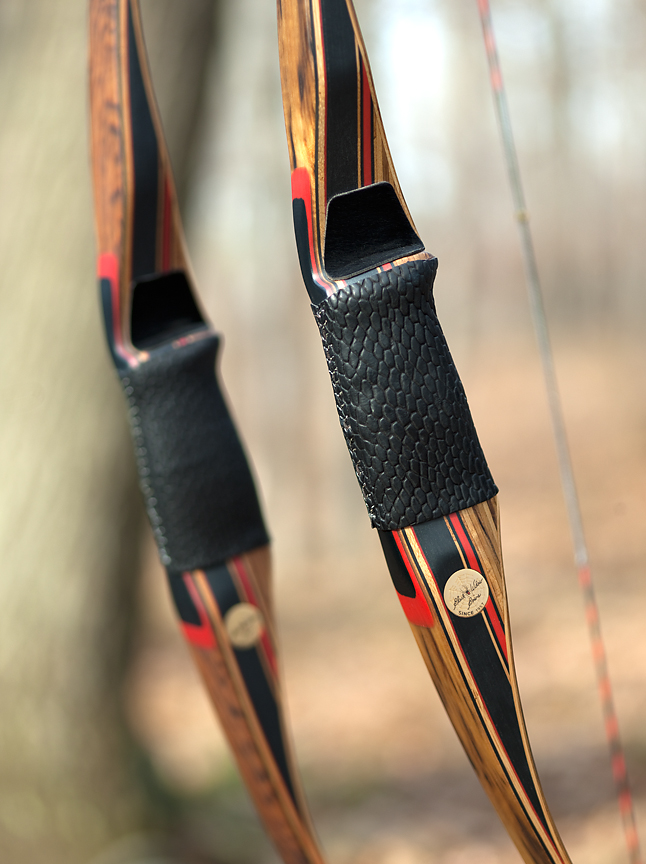 Detail of the PL-X take-down longbows, in Tiger Myrtle (foreground) and Honduran Rosewood.

When Toby Essick and I had made arrangements a month prior, he had decided to send me six different bows to photograph.  Only one of the six he had sent was a one-piece bow.  The other five were take-downs, meaning they can be taken apart once unstrung.  The recurves take-down with the removal of two hex bolts, while the longbows incorporate a neat and clean system that Black Widow calls their “Locket Socket.”  This setup offers absolutely zero evidence that the bow can be taken down, because the upper and lower halves of the bow fit together so very precisely, and the connection is concealed by the grip of the bow, made, in this case, of beaver-tail leather.  A “Locket Socket” equipped bow comes apart much in the same manner as a fine quality fly rod, making it far easier to transport in a case, on in a backpack during a hunt. 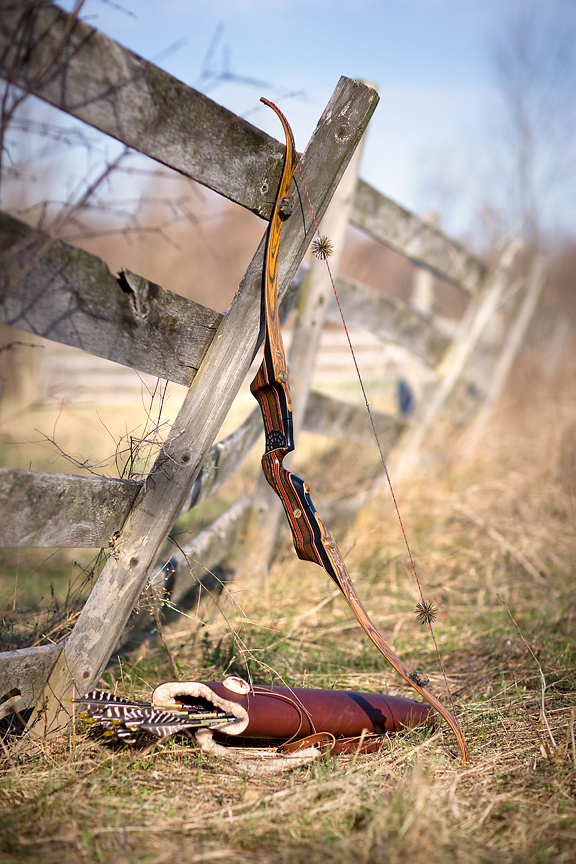 Once the photography had been completed for the catalog, I was finally able to play a little bit with each of the bows!  I had received the go-ahead from Roger and Toby to hold a Black Widow Demo Night at Creekwood Archery, in Brockport, NY.  It was pretty informal, but a dozen interested guys showed up to shoot the bows, and experience the fine craftsmanship that goes into each of them.  I was able to provide some good information to most of the questions that were asked of me that night, and it seemed that everyone really enjoyed having this rare kind of opportunity!  Since Black Widow deals directly with their customers, it’s not really possible to just pop into an archery pro shop and try one out.  Having several different models close at hand on this particular evening was a pretty special deal! 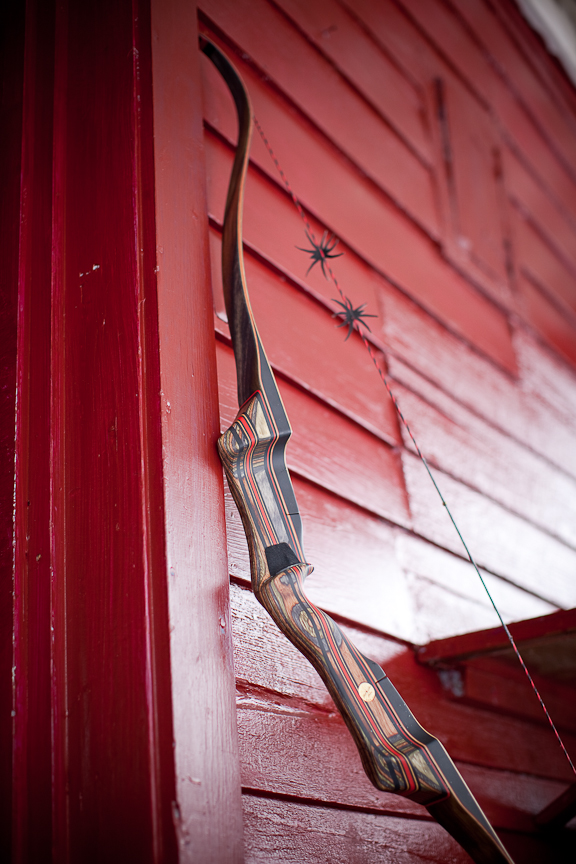 A couple days later, just prior to shipping the bows back to Missouri, I connected with good friend and creative writer, Matt Smythe.  Matt had come out to Creekwood for the demo night, and was interested in spending a little more time with a couple of the bows so that he could do a bit of a write-up for his personal blog site, Fishingpoet.com.  Initially his intent was to do a product review of a Black Widow recurve and a longbow.  I wound up bringing all of the bows to Matt’s house, where we started shooting at a block target inside his barn, and later migrated to the backyard, where we had set up a 3D whitetail buck target.  Matt’s dad, Steve, had joined us, and was really enjoying shooting the longbows in particular!  In the end, the written piece became more about Matt’s first real experience with top-end traditional bows, and with the instinctive shooting method.  Here’s a link to Matt’s great story of this day, titled Of Blood and Bows.  Fishingpoet.com is chock-full of other great material that you’re sure to enjoy, too.  Take a few minutes to go and give it a look. 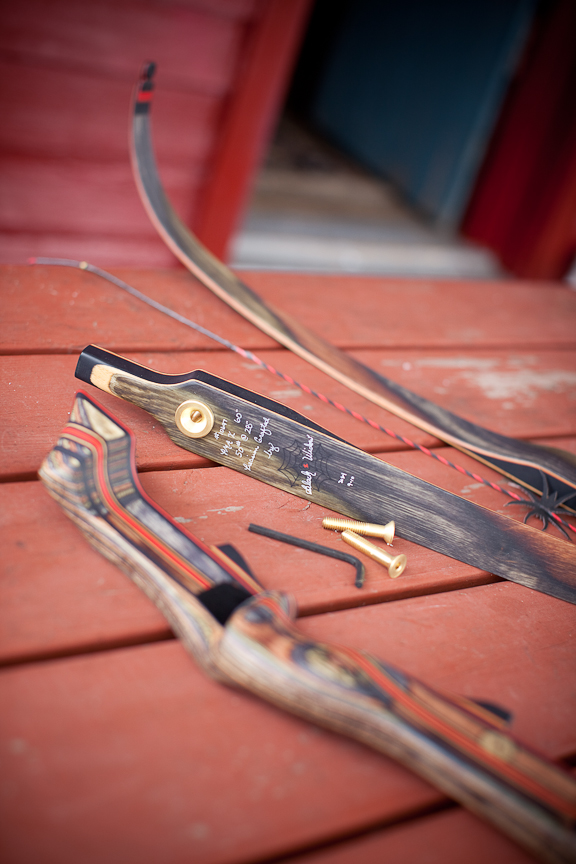 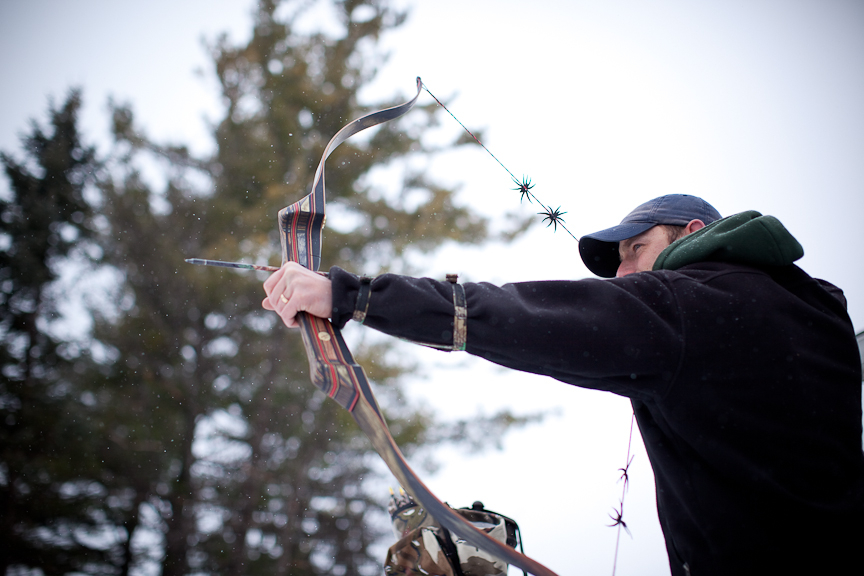 Matt getting in tune with the Camo Hunter. 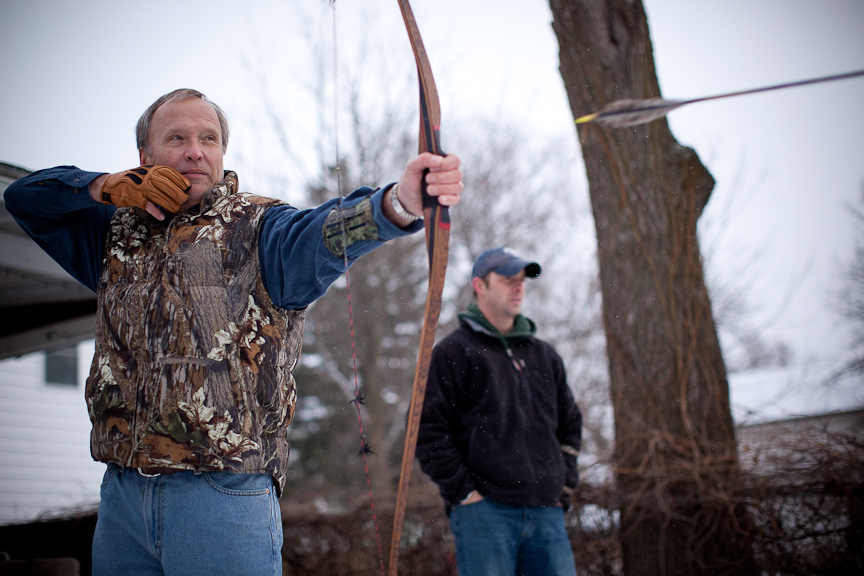 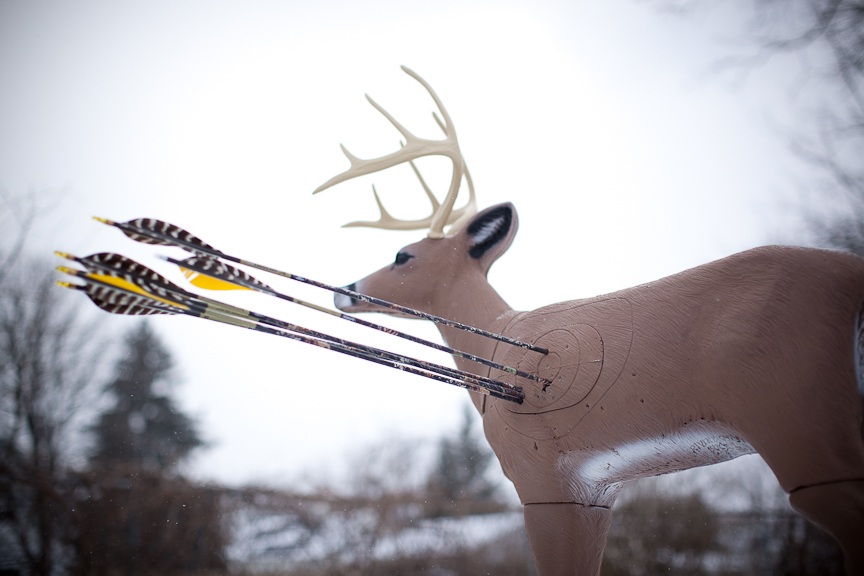 Great post, Grant. And a great day of shooting too. Much obliged for the shout!