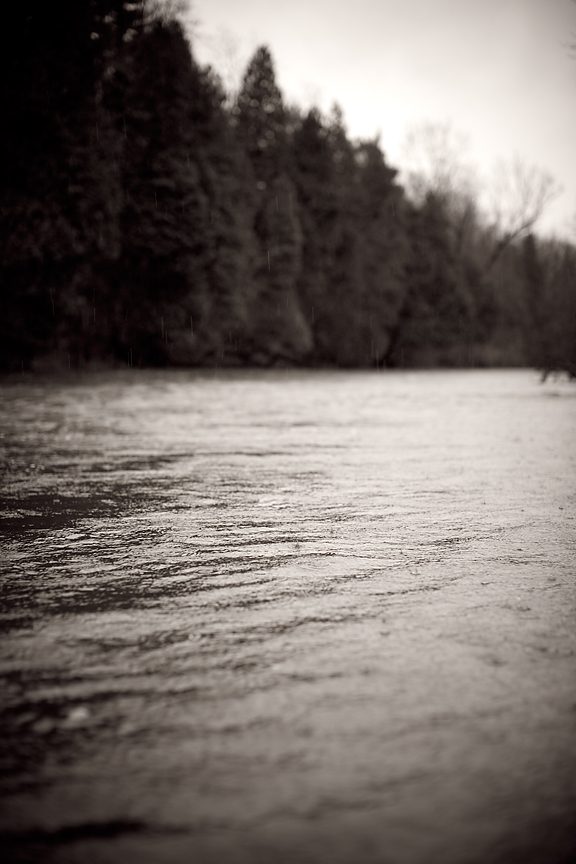 Looking upstream, into the wind and rain on Oatka Creek.

April 16, 2011.  After having scouted a few productive-looking stretches of Oatka Creek and Spring Creek a couple of weeks prior, it was time to begin work on our project for the Seth Green Chapter of Trout Unlimited.  For me, that meant gearing up in neoprene chest waders and immersing myself in the icy, rushing waters of Oatka Creek to do my photography.  For the people I was photographing, it was pretty much the same, but they got to catch some fish!  My good friends, art director, Dean Milliman and copywriter, Matt Smythe were not only along to fish and be photographed, but were gathering experiential information that they could apply to their own creative perspectives on our project.  They were collecting the heart and soul of the waters we were on, and of the day itself.  Sensitivities to be conveyed in the coming creative pieces. 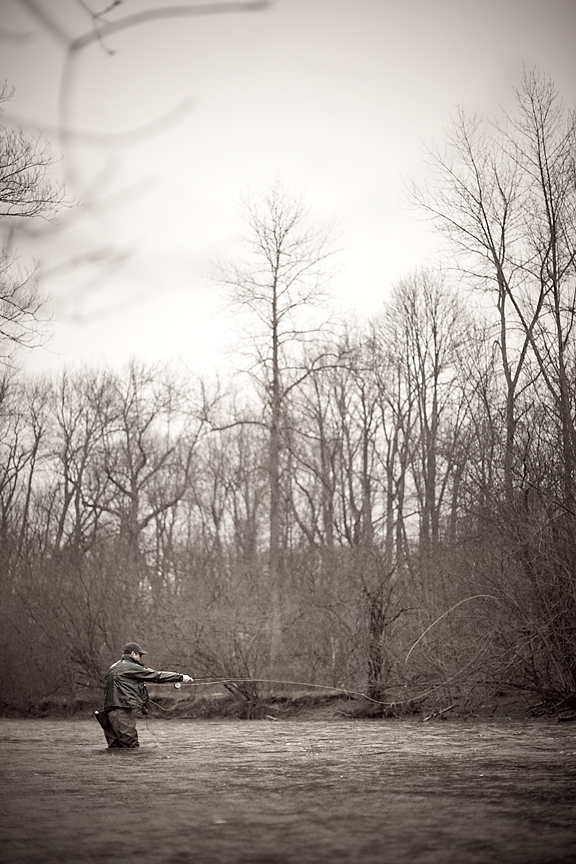 Dean attacking a likely run on my downstream side.

Weather-wise, it was one of the nastier days we had seen for a little bit.  It was cold, it was raining, and the winds gusted heavily from upstream.  Waders and raincoats, hats and light gloves.  It didn’t take too long for me to notice that the guys were taking longer than usual to tie tiny bead-head nymphs onto delicate tippets with their cold, unfeeling fingers.  Just part of the deal when you’re on a Northeast trout creek in the springtime.

As we had done on our scouting day, I had met Matt at the Jefferson Road Starbucks to pick up our jet-fuel for the morning.  Two tanks full, please.  Pike Place Roast. Black.  With a heavy spray of mist coming off the road behind the Tundra, we rocketed southward, toward Dean, who was already waiting for us when we turned into the pull-off in the hamlet of Garbutt, NY.  We all geared-up for our morning on the creek, shut the tailgate on the truck and headed down the muddy trail that would lead us through the woods to The Oatka. 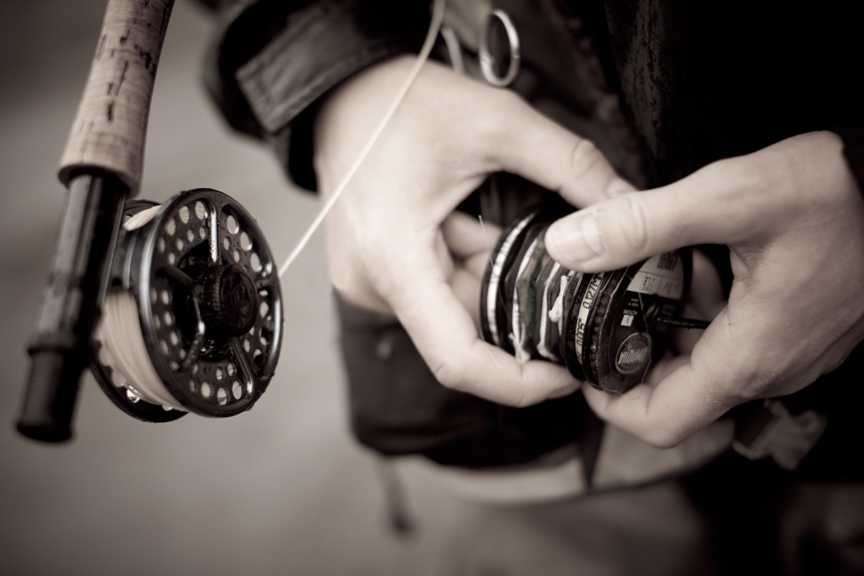 The water was a little bit higher than we had wished for, but the creek was still pretty fishable.  I hung out around the guys, photographing them from different perspectives as they waded, roll-casted, mended, stripped, and replaced flies that were lost to tree branches along the banks of the creek.  We played this way for a while, moving upstream little bits at a time, casting, shooting, protecting the camera from the wind-driven rain, and shooting some more.

Dean at The Cedars.

Dean caught the first fish of the day.  There’s always something special about that first one of the season.  The brown trout’s colors seemed impossibly intense on such a dark, drab day.  He was gorgeous.  He wasn’t big, but he sure was beautiful.  His pectoral fins were a wonderfully deep amber color, his belly bright white, with gold on his flanks.  Blood-red speckles mixed with chocolate ones to further camouflage his olive-green back.  Dean held him for me to photograph, but only for a few moments, before releasing him back into the creek’s rushing waters.

Dean’s first brown of the season.

Matt would hook up not long after, also landing a really pretty brown.  I was upstream from him, though, and couldn’t navigate the underwater rocks quickly enough to get to him and photograph his fish before its release.  That would be the first fish Matt had caught on his new Flytooth weight-forward Razorstrike line that he’d been yapping about and loving.  Dean caught a few more fish later in the day, farther downstream, and in the course of the day, we collected hundreds of images that I would bring home to edit that evening. 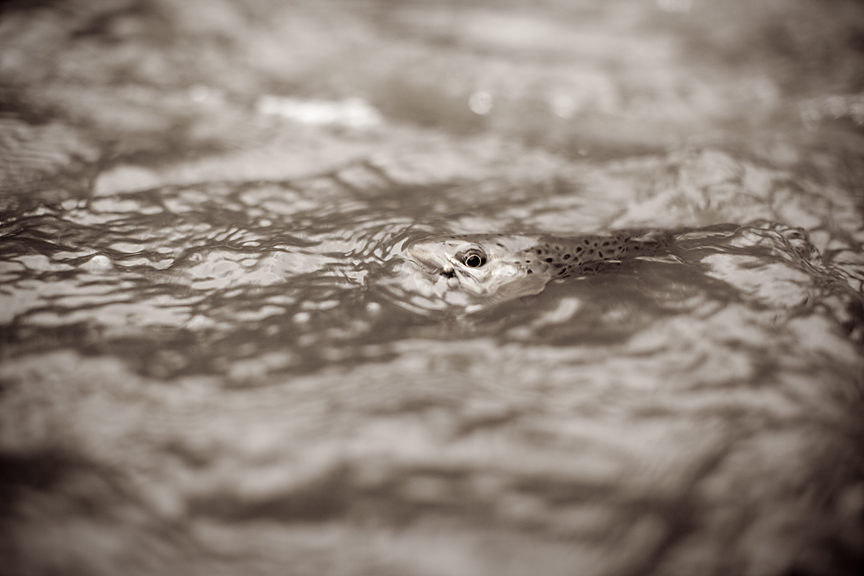 One of the day’s trout, caught on a bead-head nymph pattern.

Some of the images we collected on this first day of the project would become the ones that would set the tone for the remainder of the project.  They would become, for me, the bar that I would reach for each time we went out with the cameras.  For me, they became goals and motivators.  They also became successes.  Good, meaningful ones.  Not unlike that first good fish of the season. 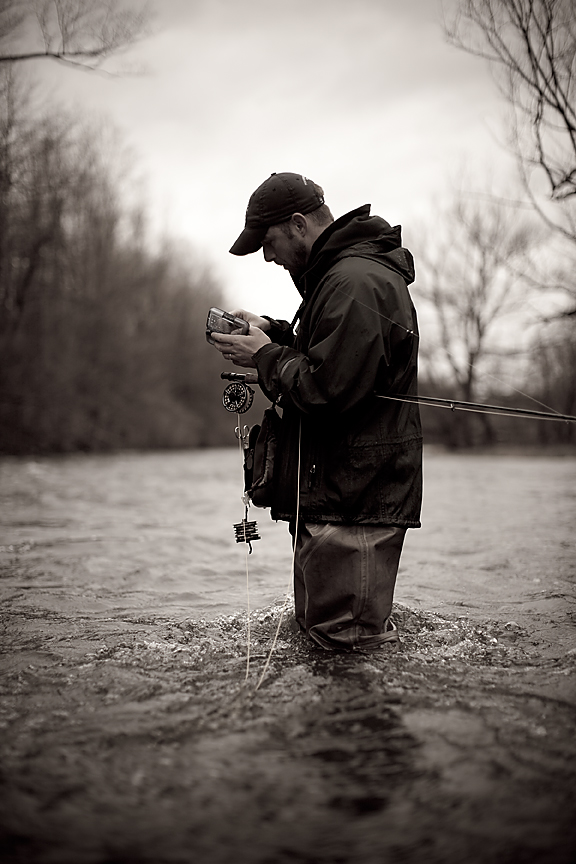 Hey Grant! Just elegant and natural – my favorite combination. I enjoyed the reading and I know that feeling oh-so-well. And there is no better choice currently than the Pike’s Place brew.

Amen, Pete! Thanks so much for the holler!